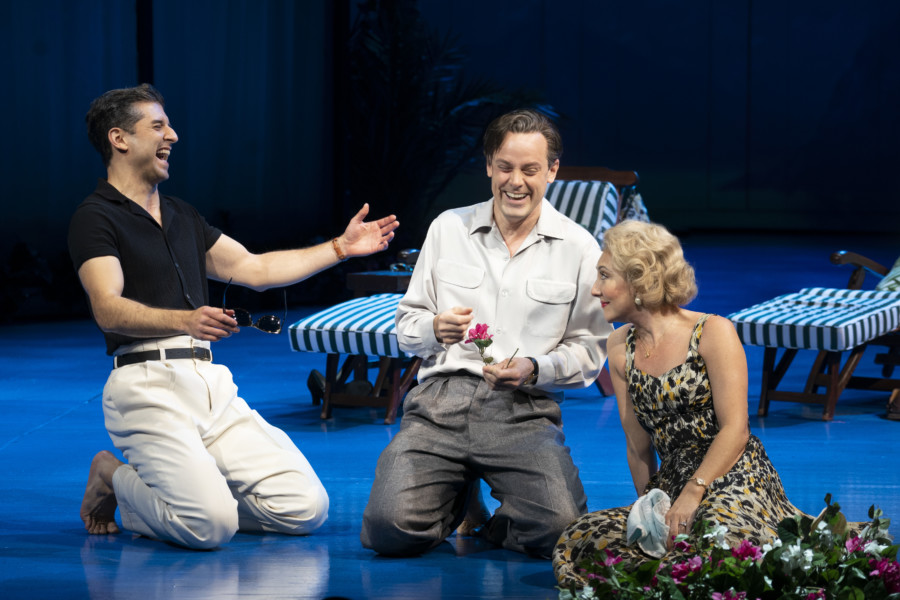 For anyone who does not like a conceptual show you may very well not like Flying Over Sunset at The Vivian Beaumont Theater at Lincoln Center. What is a Conceptual show? It begins with an idea or theme’, elaborates them with music and story and it never banters in traditional narrative. Sunset is of imaginative type: a musical that pushes against the traditional notions of what a Broadway musical should be or might be.

James Lapine who wrote and directed this show gives us three Hollywood personalities who use LSD to overcome unresolved conflicts in their lives. The drug helps them confront, work through and get rid of these bad thoughts… a chemical psychotherapy. The show is woven together, but not altogether plotless, we get small bits about the use of LSD before it was declared illegal in the late 1960’s. Gerald Heard (Robert Stella) has shown both Clare Boothe Luce (Carmen Cusack), a playwright and a politician and Aldous Huxley (Harry Hadden- Paton), a novelist the benefits of doing LSD. Heard is a wealthy scholar of Eastern religion, who doubled as an ardent advocate for hallucinogenic drugs. He is always the proctor at administrating the drug, measuring and calculating how much a person should take for maximum benefit. It is through happenstance that the three should meet Cary Grant (Tony Yazbeck) who also “explores” (the term used for acid users). Grant wanting to understand why his wife is using the drug. He even visited her doctor, Dr. Harris (Nehal Joshi). Under the drug we come to find out that Grant, whose real name is Archibald Leach, was abused by his father mentally and his mother dressed him in girl’s clothing. This was a wonderful scene watching Yazbeck and young Atticus Ware do a tap dance number that is one of the shows memorable moments.

As the show went along, we realized that Beowulf Boritt may very well win the Tony for his set designs. The vast sets made one think that these grandiose sets belonged next door at the Met. In fact, many of Cusack’s song deliverys also belonged in the next building. A booming voice left the audience wanting more of what she was singing. Though most of the songs where not memorable. “Someone”, “Flying Over Sunset”, “The Music Plays On”, “If Only I’ve Known” and “How” were the exceptions. Even when songs did not hit home, it was great projections (59 Productions) that picked up the slack. Most noteworthy was the beach scene to “Three Englishmen”.

The performance comes in at two hours and forty-five minutes and could have and should have been cut down. Scene 4 in Act Two was a bit tedious and boring. “Melancholy Hour” and “The 23rd Ingredient” tested the audiences patience. We already knew at this point what ailed each character. Clare’s losing both her mother and then years later her daughter, both to car accidents. Huxley books were misunderstood a, which many were thought to be downright subversive. Gerald and his love affair with George Cukor and his shaky upbringing. While Gerald and Aldous Huxley had privileged growing up, they too had deep routed issues.

While Sunset has a big cast, the show stayed very well on point with the four people who focused on LSD, as a method for dealing with their emotional problems. Even though they needed and loved others, it was these four that piqued our interest.

In Michael Dorrance’s choreography we get better acquainted with Maria Huxley (Laura Shoop), young Archie Leach and Ann/Judith (Kanisha Marie Feliciano). In Dan Moses Schreier’s sound we get the eerie footsteps that start both acts. Schreier puts us in a place that is dark and desolate, as we await the unknown and wonder what is in store for these four people that are about to go on these strange trips to find themselves.

As Cary Grant tells us during a acid trip “every man wants to be me, but no one knows what it is like too be me”. Clare too realizes that she is now in a loveless marriage and Huxley thinks that his books are very misunderstood.  It is the sundry elements of Flying Over Sunset that is pushed forth with extreme flair. Yazbeck, Paton, Cusack and Stella are all excellent in this production.

Some may find this show underwhelming, but for a theatergoer who wants to sit back and wait for the rush to hit them without resistance, it is an entertaining evening.

Flying over Sunset plays through February 6, 2022.

Suzanna BowlingSeptember 15, 2022
Read More
Scroll for more
Tap
NYC Shutting Down From COVID, Mutated Omicron Variant and Tuberculosis, Yet The Ball Drop a Go
Countdown to Christmas Day Our Holiday Gift Guide: The Gift of Show