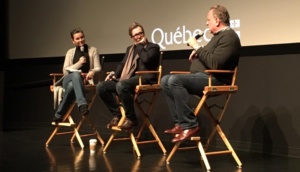 During the early days of World War II, with the fall of France imminent, Britain faces its darkest hour as the threat of invasion looms.  As the seemingly unstoppable Nazi forces advance, and with the Allied army cornered on the beaches of Dunkirk, the fate of Western Europe hangs on the leadership of the newly-appointed British Prime Minister Winston Churchill (Gary Oldman).  While maneuvering his political rivals, he must confront the ultimate choice: negotiate with Hitler and save the British people at a terrible cost or rally the nation and fight on against incredible odds.  Directed by Joe Wright.  Written by Anthony McCarten. 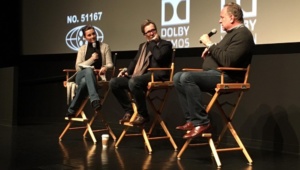 After the film Mr. Oldman address the room full of SAG and AFTRA members. 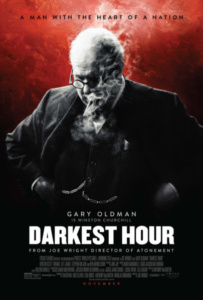 British actor Gary Oldman has played many different characters in so many film, but it’s his role as Winston Churchill in the new film “Darkest Hour” that has finally grabbed the attention of his children.

“My kids have been really underwhelmed. Most of my work they haven’t seen. For the first time, my young Charlie, who is 18, said, ‘Wow, that was a really good performance. Wow, that’s a great movie.'”

Oldman is nearly unrecognizable as Winston Churchill. He explained that he initially had hesitations about taking the part because he was required to put on so much weight for the role. “‘I can’t gain 70lbs’. What time I’ve got remaining on this Earth, I’ve been trying to lose weight! The make-up took three hours, 15 minutes and then getting into the costume was just under four hours, 48 days consecutively. I would be dressed as Winston by the time the director arrived and the other actors for rehearsal. So it was very odd. They did not see me as Gary for three months for the entire shooting because I was always in my makeup.” The taking off the makeup was almost as long as putting it on. By the time I had hit the pillow at night it was about an 18-hour day. And I worried that I would not have the stamina to get me through it. But I loved every minute of it. It’s oddly liberating. I liken it to wearing a Halloween costume: if you have ever worn a mask, you lose your inhibitions. What I was  looking for is a physical sensation. I was trying to find  that sound in my mouth. When everything was put together and I looked in the mirror after many makeup tests I felt that we’d gotten him, I suddenly realized that I didn’t have to do so much with the lip, because the makeup was doing it for me.”

In sitting in Winston Churchill’s chair in the War Cabinet Room at Westminster Gary Oldman stated, “I discovered a manifestation of stress which now physically lives in a piece of furniture. On the left arm of the chair are these huge divots that Churchill had made with his fingernails, and on the right arm there are scratches from his family ring.”

Mr. Oldman’s research, included watching newsreel footage of Churchill from the period. “What I saw in this footage was someone who was so dynamic that if you plugged him in, you could probably light up the West End” theater district.”

Oldman nailed the cadence and tone by working with an opera singer and a dialect teacher. “We worked to find Churchill’s voice by using the range on the piano.”

Thanks to Doug Urbanski who produced  Blithe Spirit, Wild Honey, Benefactors, Aren’t We All?, Strange Interlude, A Woman of Independent Means, Beethoven’s Tenth, Show Boat and Whodunnit on Broadway, Darkest Hour had four weeks of rehearsals before shooting. Now that was an interesting fact!

Action Star Paul Mormando Joins The Aquarius Boys Bash In NYC!
The SAG Awards Mark One More Award Show Down And #MeToo and Time’s Up In The Forefront