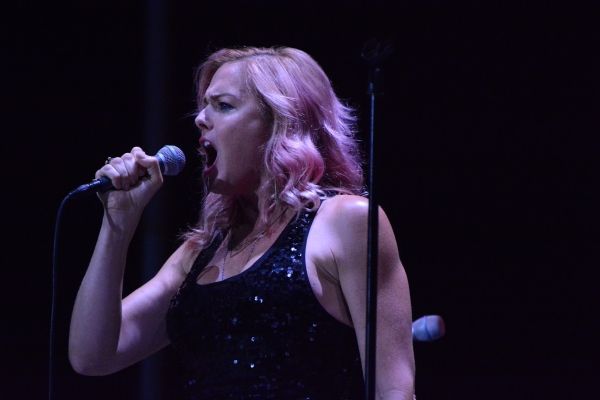 51-year-old Storm Large blew audiences away with America’s Got Talent competition with her unique spin on Frank Sinatra’s “I’ve Got You Under My Skin.” It is one of the most haunting and contemporary takes on this classic.

We have been covering Storm with The New York Pops as well as Feinstein’s 54 Below. A musician for 30 years. After graduating the American Academy of Dramatic Arts in New York, she moved to San Francisco and later Portland. While in Washington, she started up her own band called Storm and the Balls.

In 2006 she was on a CBS show called Rock Star: Supernova, which sought to find the next lead vocalist of a new band featuring Mötley Crüe drummer Tommy Lee, former Metallica bassist Jason Newsted and former Guns N’ Roses guitarist Gilby Clarke. Storm, but was eliminated just one week before the finale. Lukas Rossi ultimately won the show.

Storm created an autobiographical musical memoir called Crazy Enough, which “played to packed houses” in 2009 and also performed a cabaret version of the show. Three years later, she released her memoir of the same name, which was on Oprah’s Book of the Week and receive the 2013 Oregon Book Award for Creative Nonfiction.

She has appeared in a film called Rid of Me and starred alongside Katey Sagal and Michael McKean in Harps and Angels.

On August 7, 2015 Storm Large reformed with Pink Martini and the New York Pops at its inaugural summer series at its new home, Forest Hills Stadium.