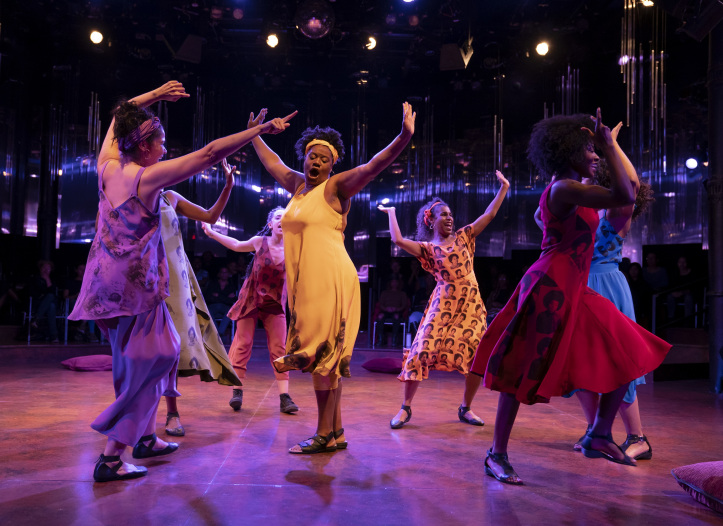 I first saw Ntozake Shange’s For Colored Girls Who Have Considered Suicide / When The Rainbow Is Enuf 44 years ago in 1977. The version now playing at The Public Theatre is vastly changed.

Representing sisterhood, the cast consists of normally seven nameless African-American women only identified by the colors they are assigned. This time they have added a white women who is deaf. They are the lady in red (Jayme Lawson), lady in orange (Danaya Esperanza), lady in yellow (Adrienne C. Moore), lady in green, lady in blue (Sasha Allen), lady in brown (Celia Chevalier), and lady in purple (Alexandria Wailes). Each brings her own personality and style to the piece.

Subjects from rape, abandonment, abortion and domestic violence are tackled. These woman don’t just dance to stay alive, but also to celebrate what they have gone through. They have been betrayal by men, as well as getting no satisfaction or justice and they are no longer wallowing in their pain.

Directed with delight by Leah C. Gardiner and choreographed with abundant joy by Camille A. Brown, For Colored Girls shines. The original music by Martha Redbone, assisted by the music direction of Deah Love Harriott, the minister of music at Bethany Baptist Church of Brooklyn, and music coordination by Kristy Norter adds a feeling of church and redemption.

Myung Hee Cho has created a crystal ballroom-in-the-round, filled with light by Jiyoun Change. Megumi Katayama sound design finishes off the effects as the costumes by Toni-Leslie James make you want to go shopping.

For Colored Girls are back and are saying The Rainbow Is Enuf if they ban together.

For Colored Girls Who Have Considered Suicide / When The Rainbow Is Enuf: The Public Theater, 425 Layfette, until Dec. 8th.