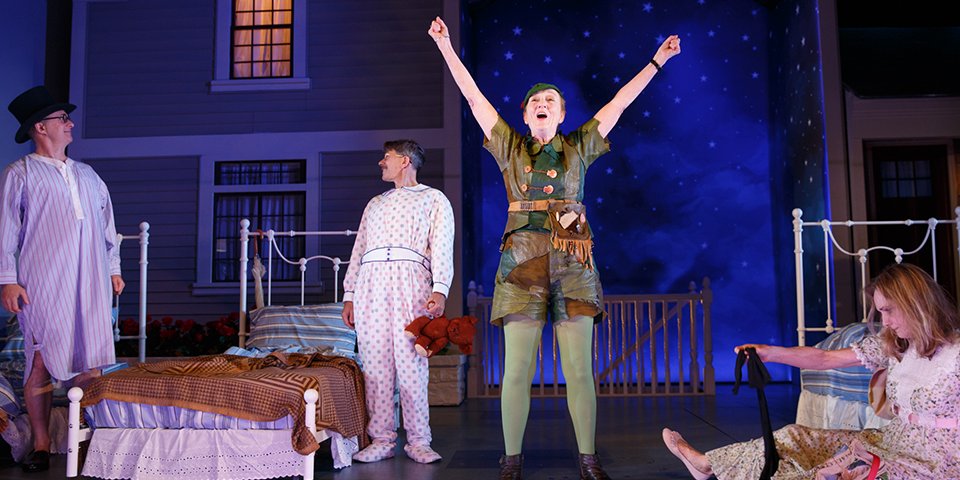 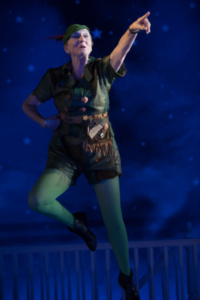 For Peter Pan on her 70th Birthday will have people split into two groups: the ones who get it, and the ones who don’t. Those who don’t won’t necessarily dislike the show, but will only see the surface of a much deeper, darker lagoon. There is so much to unpack in this 75-minute play. For while Sarah Ruhl’s new show was written for her mother on her 70th birthday, it begs the question: is her mother on her death bed? 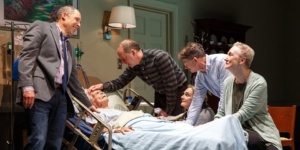 Taking from the darker, ironically more adult, themes in the classic Peter Pan lore, For Peter follows Ann (Kathleen Chalfant) as she recounts her most profound moments in life. Starting with a monologue about her time spent on stage as the famous boy who never grew up, Ann takes us back to the night she lost her father (Ron Crawford). She and her four siblings (Daniel Jenkins, Keith Reddin, David Chandler, Lisa Emery) bicker over helping him pass, reminisce about childhood memories, and stand united as a family while their patriarch leaves them. Time seems to stretch on as the siblings wait for their father to go, and when he finally does a sort of inevitable peace settles over the group. This is just where life leads. 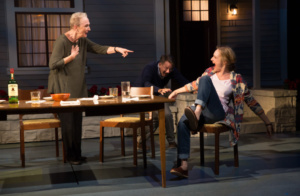 The next memory Ann recounts is a whiskey-filled wake where again the family shares old memories, battle over religion and politics, and discuss life after death and when they all felt they grew up. The family dynamics are revealed and it is clear these are arguments that have been had time and time again with no change. Here we begin to understand the stirrings of just how much Peter has affected Ann. And we also see an inclining of where she is leading us as her father reappears intermittently, reflecting the sibling’s notions of what was.

When the night ends, the siblings are transported to a fantastical reliving of Ann’s time on stage, where Wendy, Michael, and John awake to find Peter Pan in their nursery ready to whisk them away to Never Never Land. There’s fairy dust and flying, pirates and sword fights, and all the while sporadic flashes that these “children” are all grown up now and only playing at what once was. But it is the death and subsequent revival by clapping of Peter that seals the truth in these moments. When Wendy, John, Michael, and even Hook realize they need to return to their adult lives, Peter still struggles with letting go of youth. As she goes back to her days of flying across the stage, her father joins her, giving her the praise she has always longed to hear from him. In those final moments, she asks him to come with her, and she flies off one last time. It is then that you realize Ann’s biggest fear wasn’t growing up. 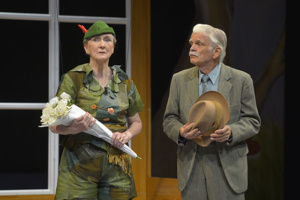 Death and youth are common themes to work with, and Ruhl handles them with expert ease. Weaving the fantastical with reality, she gives us the truth behind the curtain, before the curtain is even open. She takes from the original Peter Pan story, but only what will lend in her own tale. Like using the middle brother Jim, the self-proclaimed vanishing point who seems to be the most grown up of the five to play Captain Hook. Or the notion that death can be defeated if only we believe in it. 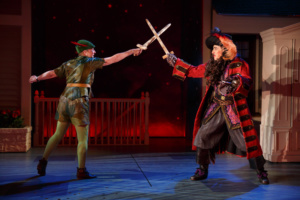 The cast is phenomenal, but stand out performances by Chalfant and Chandler give the show heart and humor. Chalfant’s Ann is filled with a childlike wonder of the world that lends to her desire to not grow old. Chandler’s Hook is perfectly comical and truly memorable.

Les Waters’ direction hits home most of the time, though a few moments drag on. I’m all for a pregnant pause, but don’t put me to sleep. Scenic design by David Zinn is large and pays attention to detail – you can almost smell the hospital in the first scene. Lighting and sounds by Matt Frey, Bray Poor, and Charles Coes keep you in the moments.