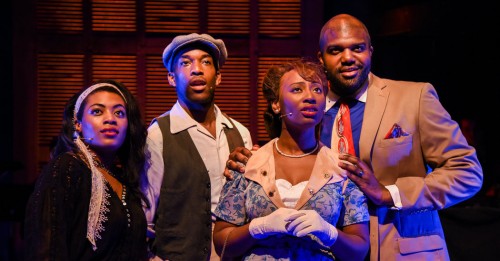 For the Last Time: Great Jazz Music with an OK Book

For the Last Time: Great Jazz Music with an OK Book

For the Last Time, has a great score by Nancy Harrow with wonderful singers, but a confusing mediocre book. The later is surprising since the source material is Nathaniel Hawthorne’s novel “The Marble Faun.” Billed as four friends one with a sinister secret, the secret is not so horrible and the consequences make no sense. Set in 1950 New Orleans, the four friends include; the haunted beautiful, vivacious Miriam (Brittany Campbell); the newcomer and churchgoer Hilda (Anita Welch); the womanizing, smooth-talker Kenyon (Carl Clemons-Hopkins); and the sweet country boy Donatello (Britton Smith).

The direction by Mr. Pomerantz and the two-tiered set by John McDermott are both well done. The cast is strong with Mr. Clemons-Hopkins giving a powerhouse performance. The outstanding musicians include an eight-piece band led by Cody Owen Stine with outstanding trumpet playing by Alfonso Horne.

As a concert this show would have been a must, as a musical go for the music and don’t expect a strong script.