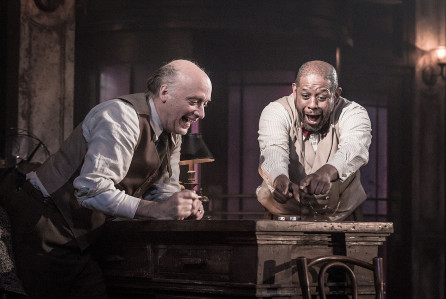 Forest Whitaker Can Not Save Hughie

Forest Whitaker Can Not Save Hughie 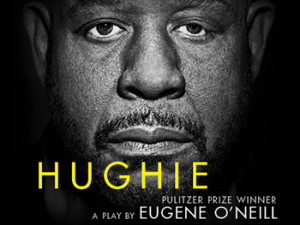 Forest Whitaker and Frank Wood, are both excellent actors, but the revival of Eugene O’Neill’s Hughie is a bore! Who knew it would be so hard to stay awake during a one hour and ten minute show. I was well rested and ready to be wowed, but the dialogue is so repetitive and the character of Erie Smith (played by Forest Whitaker) has nothing to do. Originally written in 1942, the play takes place in what is suppose to be a dingy hotel in 1928.  The play is essentially a long monologue delivered by a small time hustler Smith to the hotel’s new night clerk Charlie Hughes (Frank Wood), lamenting how Smith’s luck has gone bad since the death of Hughie, Hughes’ predecessor. I would assume the play is about connection, but connected I wasn’t. 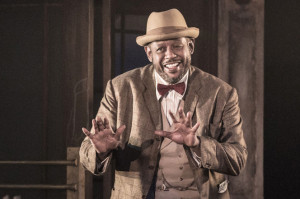 Michael Grandage has not let us in on the fact that Erie is washed up. Even the costumes and set by Christopher Oram fails. The suit looks nicer than it should and the hotel is haunting more of a shell of its former glory, not a derelicts residence.

In Whitaker we do not see the beaten look or the fact that he has been on a five-day drinking binge. His words are too perfect, his manors to precise. What there is, is a repetitiousness to the script. How this won the Pulitzer Prize is beyond me.

Despite the names of Eugene O’Neill or Forest Whitaker it was announced that Hughie will close early losing close to $3 million.

Originally slated to close on June 12th, the show will go dark on March 27th.

“Due to limited advance ticket sales following highly positive reviews and Critic’s Picks from The New York Times, Associated Press, The Washington Post, USA Today and Newsday, Eugene O’Neill’s Hughie will play three more weeks, with its final performance at Broadway’s Booth Theatre on Sunday, March 27, 2016,” reads the statement from the producers. “The production will have played 55 performances.