“One man’s To Kill A Mockingbird is another man’s Twilight saga!” 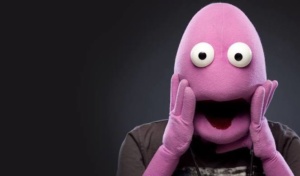 Randy Writes a Novel, has created quite a following, and I can see why. Randy a purple puppet, much like the characters in Avenue Q. He is an Australian, who has been touring the world landing in New York City for his debut at the Clurman Theatre.

As Randy sits behind his desk, he encourages the audience to participate. Basically this is an hour and 20-minute comedy routine you expect to see at Carolines. Randy speaks to the audience finding out where they are from and riffs on what they say. Randy has been kidnapped, arrested, married, divorced and thrown violently from a hovercraft. Now he has written a book and wants to test audience reactions to it. This bawdy puppet has been mingling with Neil Patrick Harris and Jane Krakowski, and his book is called Walking to Skye. Though Randy’s desire is to read some passages from that book, he is crippled by insecurities.  Every time Randy starts to read us a passage, he gets distracted and his sardonic humor goes into play.  His admiration for Ernest Hemingway turns into “The quintessential antihero: talented, charismatic, belligerent, suicidal, alcoholic genius that can’t keep his dick in his trousers– and yet he still found time to write about 15 books. I’ve written ONE!”. This show is really about procrastination and the things we use to procrastinate.

The man behind Randy, is Heath McIvor, who worked for Jim Henson and who you will never meet. Through Randy, he knows how to keep you engaged, hold your attention and create laughter.

This show has created a cult following and more than half the audience was seeing the show for a second time. Now that’s  a recomendation.

Suzanna BowlingJanuary 24, 2023
Read More
Scroll for more
Tap
Molasses in January a Disaster In Oh So Many Ways
Inside the Outer Critic Circle Awards Ceremony Part 1