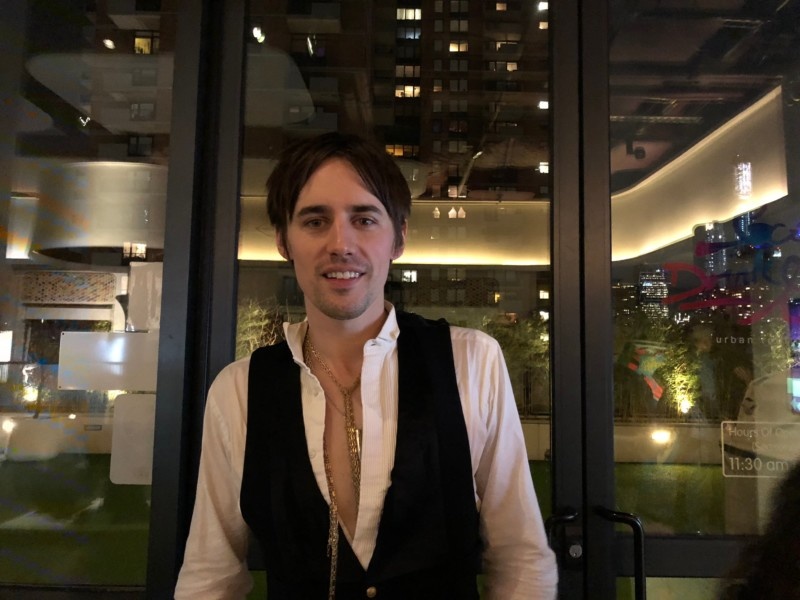 I have to say The Green Room 42 was really who introduced me to the Rock God known as Reeve Carney. I was at his cabaret debut and was blown away. He was seriously not shown to his full extent in Spider-Man Turn Off The Dark. When I heard he was cast in Hadestown in London I was thrilled, then I read the reviews and realized that part of the problem with Hadestown, is that the role Reeve plays has never been given a song worthy of winning a contest with the devil.

I submit to you “Testify”. Not only is the song worthy of the role, but Reeve’s name and Hadestown will be on everybody’s lips and this show will surpasses the one flaw that has been holding it back.

Mr. Carney is a musician’s musician and he proved it again last night. I had been ill and my energy extremely low. This concert gave me the injection I needed to truly heal and reminded me how healing music can be.

Reeve sings perfect pitch, plays an array of instruments and his writing hits to the soul of humanity. This show was all his own writing and it was amazing. I can not wait until next week, Reeve is doing a concert of the songs of Queen. March 3rd at 9:30 The Green Room is the place to be!

One of the highlights of the show was his brother Zane joining him on stage. That video I have intact and it will be tomorrows surprise. Until then you can catch EVAN + ZANE ie: Evan Rachel Wood (Westworld, Across The Universe, Thirteen, The Wrestler) and Grammy Nominated Guitarist/Singer-Songwriter Zane Carney (John Mayer, Avril LaVigne, U2’s Spider-Man on Broadway, CARNEY) tonight at the Bowery Ballroom at 8pm. Since it was only decided a few days ago, this show still has tickets available. At $25 they are a steal. This duo’s first LA based shows sold out within a matter of days

Also rumor has it that James T. Kelly will star as the serial killer Ted Bundy in the new musical The Ted Bundy Project written and composed by Clint Edwards who is also moonlighting as the musical director and arranger for cabaret’s new ‘it’ boy – Mark William and his show ‘ Come Croon With Me’ which returns to The Green Room 42 on Friday March 29th at 7pm.
The Bundy Project will have a musical presentation sometime in May, also at The Green Room 42 with The Green Room’s own Daniel Dunlow as a cop. Stay tuned.’

Suzanna BowlingOctober 30, 2022
Read More
Scroll for more
Tap
Events For March Will Have You Seeing Green
2019 MAC Awards Honor Karen Mason, Joe Iconis, Midnight at the Never Get and More