“Forgiven” From Jagged Little Pill Gets Debuted By Carrie Manolakos at Broadway Stands Up For Freedom MY BODY MY BUSINESS! 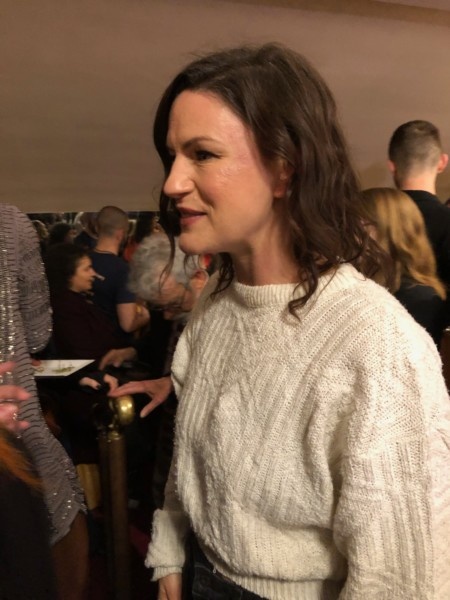 “Forgiven” From Jagged Little Pill Gets Debuted By Carrie Manolakos at Broadway Stands Up For Freedom MY BODY MY BUSINESS!

Stands Up For Freedom is the largest single fundraising event for the NYCLU and the ACLU was MY BODY MY BUSINESS!. During the event they honored two women. The first was Eva Price and Level Forward.

Eva Price is a three-time Tony Award-winning producer of over 18 Broadway plays, musicals, and concerts, a member of The Broadway League’s Board of Governors, and on the producing team of Killer Content and Abigail Disney’s venture Level Forward. Her credits include Oklahoma! (2 Tony Awards, Best Musical Revival); Alanis Morissette’s Jagged Little Pill (A.R.T., Broadway) and What the Constitution Means To Me, as well as several other Broadway hits.

Level Forward develops, produces and finances high quality entertainment with Oscar, Emmy and Tony Award-winning producers, working to extend the influence and opportunity of creative excellence, advance economic transformation and support new voices. The Company takes great responsibility for its work, using film, television, digital and live theater to advance equity and shareholder return through story-driven, impact-minded properties. Level Forward wrapped four films in the past year, all by first-time female, feature film directors including Topside from wife and husband team Celine Held/Logan George and The Assistant from Kitty Green, as well as seven short films from a variety of emerging female filmmakers in partnership with Refinery29. The Team is also a producer on Slave Play’s transfer to Broadway as well as the forthcoming musical Jagged Little Pill.

To see part 1 with Phillipa Soo click here and look for parts 3, and 4 coming up!

Genevieve Rafter KeddyNovember 24, 2022
Read More
Scroll for more
Tap
Phillipa Soo Rocks The Town Hall at Broadway Stands Up for Freedom at MY BODY MY BUSINESS!
You Are There at The Drama League 2019 Gala Honoring Sutton Foster