“Four for the Holidays” is the Perfect Number at Beach Café 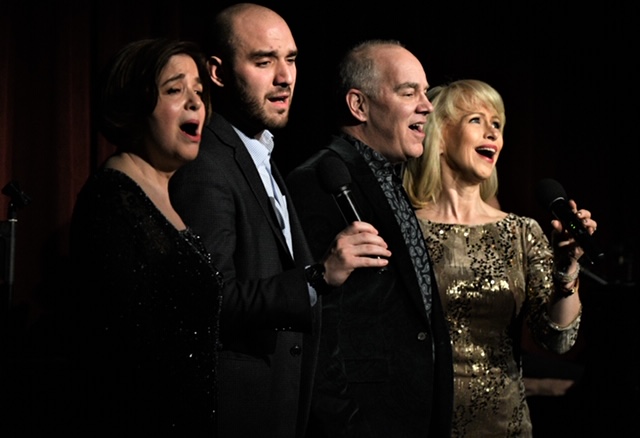 “Four for the Holidays” is the Perfect Number at Beach Café

I love the Beach Café. Its velvet-draped walls surround its patrons like a cozy blanket. The food is really good, and remarkably affordable for the upper East Side. But best of all, owner Dave Goodside always books top cabaret entertainment to go with his famously exceptional hamburgers.

Most holiday shows are relentlessly chipper, and likely to induce diabetes with their sweetness. But grownups know that the holidays aren’t all gingerbread cookies. For many, this time of year is about sharing with the people you love. But for others, it’s also about missing them, and battling the blues.  Many people don’t know that “I’m Dreaming of a White Christmas” was written by Irving Berlin in snowless Los Angeles, as he was missing being back east for the holidays.

So Mr. Rybeck set out to create a holiday concert for grown ups, which balanced mirth with melancholy.  He and his company of talented singers delivered the goods beautifully, in a cabaret stocking stuffed full of adult emotional pleasures.

He hinted at the tone to come with his opening song, “The Bell That Couldn’t Jingle”.  Then he was joined by timeless beauty and shiksa goddess, Karen Oberlin, to sing “Baby, It’s Cold Outside” (which, they rightly pointed out, needs no apology), turning the sexual tables in the end.

Ms. Oberlin concluded her solo set with heartfelt renditions of  “The Man With The Bag” and “White Christmas.”

Next up was a talented and charming young tenor, Ari Axelrod, who reminded us (as Chanukkah is almost upon us) that the holidays are for Jews too…not to mention that Jewish guys wrote most of the great holiday songs!

In a thoughtful and at times quite triste arrangement by Mr. Rybek, Mr. Axelrod sang a deeply moving medley of “My Favorite Things” and “What A Wonderful World.”   He followed that with a gorgeous, unknown song by Josh Nelson called “L’dor Vador”, which means “from generation to generation” in Hebrew.  Nobody does bittersweet as beautifully as the Chosen People, and only a couple lansmen like Mr. Rybeck and Mr. Axelrod could have delivered that feeling so perfectly.

Mr. Axelrod was then joined by Ms. Oberlin along with Celia Berk, who was in fine voice.  They segued nicely into a hysterically funny song which I didn’t know, called “A Jewish Christmas” by L. Kershner, with such lyrics as “a burning bush to heat my tush”. and “Lox, stox and barrel!”   Well, maybe you had to be there. But it was funny!

Ms. Berk gave us another quiet and beautiful musical moment, melding “Silver Bells” and “Carol of the Bells” with “Waltz #2 Opus 99” Shostakovich, again brilliantly arranged by Mr. Rybeck.  She closed her set with “A Simple Prayer”.

Mr. Dozier then took the stage, and demonstrated in a supple and gently beautiful tenor voice what makes him such a fine recording artist. He has just released a new CD, which I look forward now to hearing.

He started his solo set with “Christmas Eve,” a wonderful song by Mr. Rybeck and lyricist Carol Hall which should be a holiday perennial.  He followed with sweet and lovely renditions of “Let It Snow” and “O, Holy Night.”

In yet another surprising and heartbreaking arrangement by Mr. Rybeck, Ms. Berk and Ms. Oberlin sang a medley of “What Are You Doing New Year’s Eve?” with “After the Holidays”.  What starts out as a simple song about a date turns into a passionate plea for affection ending with “stay with me until after the holidays”. There wasn’t a dry eye in the house.

The company ended on a brighter note, with their ensemble rendition of “Have Yourself a Merry Little Christmas.”

So if you can get a ticket, come in from the cold over the holidays and warm up with any of the talented performers coming up at the Beach Café.  As for this wonderful evening, I couldn’t have enjoyed being less happy any more.

Genevieve Rafter KeddyMay 10, 2022
Read More
Scroll for more
Tap
The Carney’s Do Christmas at The Green Room 42
Countdown to Christmas Our Holiday Gift Guide Day 23: The Gift of Song