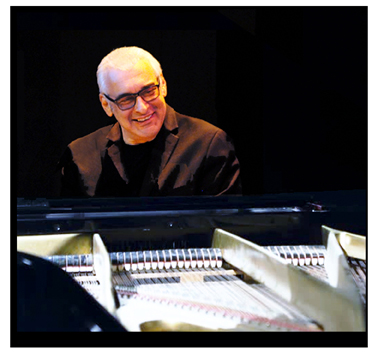 Who loves you, Frankie Valli? Your former musical director, Lee Shapiro, and he’s releasing a tribute album to salute you for 45 years as a friend and mentor.

Though he’s been playing the greatest hits of Frankie Valli on the world’s stages since he helped make them hits as his fellow Jersey Boy’s 1970s musical director and arranger, Shapiro brings an entirely new twist to the iconic vocalist’s music with the Sept. 28 release of Lee Shapiro Plays the Greatest Hits of Frankie Valli (Mink Mitten), a solo piano tribute, interpreted for the very first time as instrumental cocktail music.

Shapiro, who originally arranged two of Valli’s biggest Four Seasons hits in the mid-‘70s, the No. 1 smash “December, 1963 (Oh What a Night)” and “Who Loves You” (#3), continues to play Valli’s best across the USA these days with The Hit Men, his unique Supergroup of classic rock’s legendary side men.

“I always knew his music would be effectively adaptable to a piano solo format,” says Shapiro. “The songs are so harmonically clever and melodically interesting. Although it’s taken 45 years, the time is right.”

With fellow The Hit Men band member Jeff Ganz producing, Shapiro came up with a 10-song collection that reflects the set list from the first time they played Las Vegas together, with a big orchestra, at the original Aladdin Hotel & Casino in 1974. The selections span the 10-year period leading up to that moment, from early hits “Dawn” to later classics “Swearin’ to God” and “My Eyes Adored You,” with fan favorites such as “Marlena” and “Silence Is Golden,” and of course, the mid-‘60s ode to Sinatra, “I’ve Got You Under My Skin.”

Valli launched Shapiro’s career as an unsuspecting 19-year-old Jersey Boy. He would go on to work alongside the likes of Barry Manilow, Cher, Tommy James & The Shondells, Chuck Berry, Tony Orlando, and many other superstars, before forming The Hit Men to forge the latest chapter.

“Frankie threw me in the water and required that I swim,” Shapiro recalls. “Fortunately, I swam.”

Shapiro had been writing arrangements for an 18-piece jazz band in Garfield, NJ, when opportunity knocked. Valli was looking to replace Bob Gaudio in the Four Seasons and got a tip to check out Shapiro at a Jersey jazz club with the big band. That led to his audition in the banquet room at the Fountain Restaurant in Belleville, NJ, where the Four Seasons were rehearsing.

“Frankie came in, they put music in front of me, and said. ‘Play this,’” says Shapiro. “The song was ‘Dawn.’ I played the first chord, Frankie started singing, and I froze. He says, ‘What’s the matter? Why aren’t you playing? And I said to him, ‘Man, you sound just like the radio,’ and that cracked up everybody in the room. I felt foolish, but I continued, and the rest is history. They hired me despite my young age.

“As I look back on it, Frankie believed in me before I did. He provided the vehicle for me to learn everything I know about recording and performing, having put me in the studio with the likes of Bob Crewe, Bob Gaudio, Charlie Calello, and Artie Schroeck, as well as top session cats like Steve Gadd, Gordon Edwards, Richard Tee, Georgie Young, and singing stars Patti Austin, Darlene Love, and Donna Summer.

“The last time I saw Frankie it occurred to me that this album concept was more valid than ever, especially now that ‘Jersey Boys” has brought his music back to the forefront. This is my thank you.”

Shapiro and The Hit Men are back on the road this Fall with an extensive U.S. tour aimed at delivering the hits they first played with the original superstars.

Following a final warm-up date at Friends of the PAC in Middleton, WI (Sept. 29), the Fall tour kicks off in earnest Oct. 12 at the Mohegan Sun in Uncasville, CT, and continues through the Northeast, Midwest, and further west into Utah and Texas through the holiday season, before wrapping over New Year’s Eve with a three-night celebration at the Black Bear Casino in Carlton, MN.

What the Wrecking Crew meant to the pop music revolution of the ‘60s, The Hit Men have meant to some of the most indelible hits of the ‘70s, ‘80s and beyond. It’s only now that the evolution of The Hit Men’s story – fueled, in part, by their countless first-hand experiences as eyewitnesses to rock history – has become a revelation.

From transistor radios, vinyl, 8-track tapes and cassettes to the Sony Walkman, CD’s, digital downloads and the Apple iPod, The Hit Men ― Jimmy Ryan (lead guitar/vocals, and Carly Simon’s former musical director), Lee Shapiro (keyboards/vocals, and Frankie Valli’s1970s musical director), Jeff Ganz (bass/vocals), Russ Velazquez (vocalist/keyboardist/percussionist), and Steve Murphy (drummer/vocalist) ― have seen and heard it all. And they have the stories to go with it! The Don’t Stop U.S. Tour, having already criss-crossed the U.S. with an all-new production features the most recent chapters in The Hit Men’s “Hits-tory.”

G. H. HARDINGNovember 23, 2021
Read More
Scroll for more
Tap
How Long Does it Take to Learn the Piano and How Can you Hasten the Process
The Manhattan Transfer to Bring Their Eclectic Sound to Kean Stage September 30