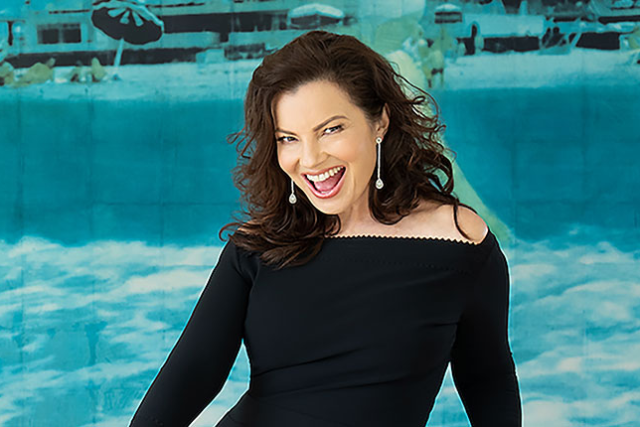 Acclaimed actress, comedian, writer and activist Fran Drescher makes her Café Carlyle debut, June 16 – 20. The Queens native has received two Emmy and two Golden Globe nominations for her portrayal as the lovable Miss Fine on the CBS hit series The Nanny, a show she also created, wrote, directed and executive produced. Fran’s next sitcom was based off of her real life relationship with her gay ex-husband, Peter Marc Jacobson — a show she also produced, created, and starred in called Happily Divorced. Currently, she is starring in NBC’s new sitcom Indebted where she plays a baby boomer gone broke who has to move in with her adult son and his young family. An accomplished film actress, she’s won Esquire’s Five Minute Oscar for her memorable performance in the mockumentary, This Is Spinal Tap. She has co-starred in countless films throughout her career with the likes of Robin Williams, Dan Aykroyd, Tim Robbins and Billy Crystal, not to mention such esteemed directors as Rob Reiner, Milos Forman and Francis Ford Coppola. Her latest films slated to be released this year are The Creatress and After Class.

Fran is also a two-time New York Times bestselling author with her books, Enter Whining and Cancer Schmancer. She’s also written a children’s book titled Being Wendy. Fran is a cancer survivor and a thriver. Having turned her pain into purpose, she founded the Cancer Schmancer Movement: a nonprofit that educates, motivates, and activates people into connecting how they live with how they feel. She has done so by creating progressive programs such as Detox Your Home and educational videos such as Be the Change, starring Jamie Foxx, targeting teens. Her current show, Schmoozing with Fran, incorporates all that she is, covering the full gamut: her parents, her gay ex-husband, health issues, dating, and getting older. She splits her time between Manhattan and Malibu and continues to lend her unique voice to a myriad of issues she is most passionate about — namely, LGBTQ, arts and education, a cleaner environment, and regenerative sustainable food sources.