Frances Ruffelle is Like Fine Wine She Just Keeps Getting Better 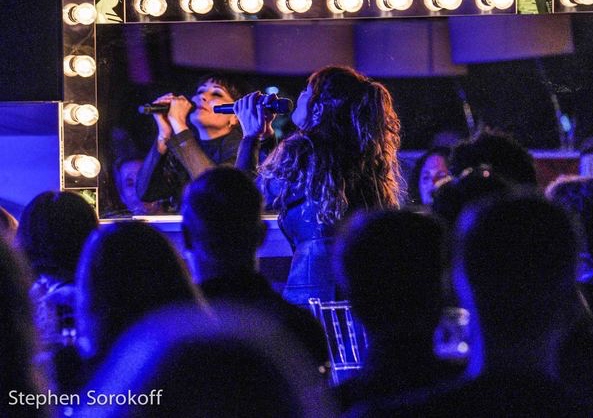 Frances Ruffelle is Like Fine Wine She Just Keeps Getting Better

In a prior review I stated “Ruffelle turns each song into a playlet, which then the playlet becomes a bigger piece thanks to Ms. Ruffelle and her co-creator Gwyneth Herbert. They say it takes a village, well kudos also goes to musical director Jude Obermuller and David Barber for additional arrangements. Using almost a beat box version of prose to narrate we have been dropped off into an almost Ron McKuen trance.” The same is true now, only this time this firecracker performer infuses her act with high octane energy and it is infectious.

Starting out with “Elsewhere” a song she wrote with record producer Mike Thorne “Elsewhere” the show took on a 60’s vibe, which blended in to “Un Home Et One Femm” the theme song from the film A Man and a Woman. Complete with flower petals and da da da dadada, we are again entranced.

“Alabama Song” becomes a be bop jazz song. This was Ms. Ruffelle’s tribute to the original Nancy from Oliver, Georgia Brown.

A Judy Garland mash-up of “Paris is a Lonely Town”and “Lonely Night in Paris”, is when the concert starts to really be a play about her life or a women’s journey through life.

Wayne Wilcox  is best known for his role of Marty on the TV show Gilmore Girls, joins Frances for “Paris Summer.” The two have so much chemistry that sparks fly and sex fills the air.

“La Foule” is a sexual come on, as “This Is What It Is” and “Hymne L’Amour” are her tributes to Michael LaChiusa’s The Wild Party and Piaf! She performed both shows to rave reviews in the West End and it is easy to see why.

“Piano Practicing” show off incredible patter skills. Ruffelle is a consummate actress with eyes that are out of a silent movie. They say and tell all.

With a second guest star Catherine Porter(I have been a fan since I heard here rendition of Peter Mills “It’s Amazing The Things That Float”), “Little Girl Blue” and “Best Friend” from Michael LaChiusa’s The Wild Party, showed a camaraderie that was infectious. The two went into the fabulous “I Say Yeh-Yeh” with Porter’s energy matching Ruffelle.

“A Quoi Ca Sert (Take the Mercedes Benz)” had Ms. Raffelle touring the whole room. There was not one seat that did not get an up close and personal view of this lithe and highly personable performer.

“Gotta Move” had Ms. Ruffelle doing almost a cowboy sex kitten act, which was highly entertaining. For that matter the whole show is.

“Lilac Wine” was an intimate portrayal of laying ones soul bare.

“It’s Alright With Me” was done slow with secrets to tell, with a fabulous arrangement interpreted by a master.

This show made you love life. Kudos to Tim Basom on guitar, Dustin Kaufman on drums, Sam Zerna on bass and Steven Wenslawski on accordion. These musicians added to the flare of the show.

“Frances Ruffelle LIVEs in New York” will be performed at The Green Room 42 (570 Tenth Avenue at 42nd Street, on the 4th Floor of Yotel) September 8, October 20th and November 30th all at 7pm.

This is a show not to be missed and to be seen over and over, as there will always be something new.