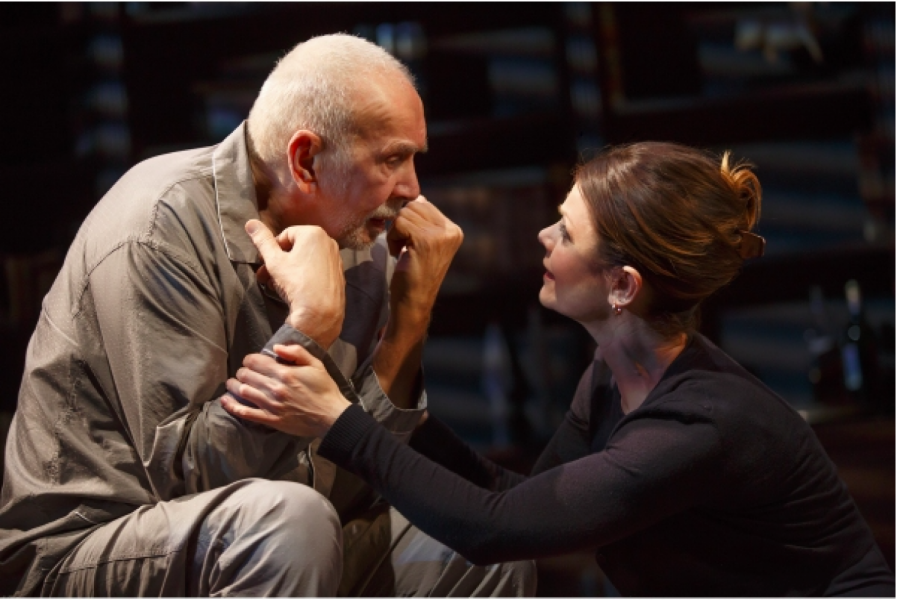 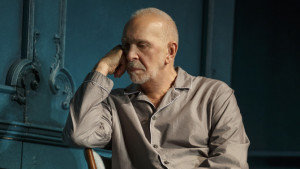 Dealing with Alzheimer’s is difficult enough, to watch someone go through it terrifying. In Florian Zeller’s The Father, at the Samuel J. Friedman Theater, we see what André (Frank Langella) sees. We experience the loss of memory, of identity, of human failing through his mind as he loses his dignity and identity. It is disorienting, harrowing, riveting and frightening. 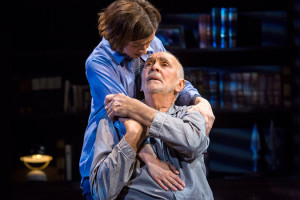 André is elegant, old, lonely, disgruntled and want to be left alone. His daughter Anne (Kathryn Erbe) can not let that happen as he is advancing into dementia. He does not know certain people, spaces or where he left his watch. Time for this man is important and as he loses his beloved watch, so does he lose the time frame in his head. At first we think maybe the characters are playing tricks with him, until you realize we are inside André’s head. As one person leaves the room so does a moment of time in his brain. He ignores what his over sized pride and ego will not accept. André is unsympathetic yet he tugs at our empathy. His daughter tries valiantly but she is stressed and needs to find her life from this man who is vicious towards her. He constantly tells her he wants his other daughter, who is gone. Anne keeps trying to hire help and with Laura (Hannah Cabell), she thinks she has finally succeeded when her father compares her to her lost sister. “Your face is familiar,” as he flirts and tells her he used to be a tap dancer. He then turns on Laura with a vengeance that is snide and calculating.

At one point he may or may not have been hurt, as others think he is playing a cruel game. I tend to think that part is real as what he does in response I have seen other dementia and Alzheimer’s patients repeat.

Doug Hughes, keeps the slow moving, clinical and running at a time frame that matches the text. Donald Holder’s lighting disarms you and tics off the loss of neurons. It is disorientating.

Ms. Erbe (Law and Order: Criminal Intent ) is well suited to the role of the daughter and makes her sympathetic yet just as cold. We understand how she has gotten caught between a rock and a hard place with a father who holds very little love for her. Ms. Carbell adds some humor and warmth. Brian Avers, Charles Borland and Kathleen McNenny all complete the competent ensemble, but this show is Mr. Langella’s. He makes us feel the gamut of emotions and when he is cruel, we feel the slice. When he is missing information we feel the estrangement and when he has crumbled back to the beginning of time we feel the bereavement of a life sucked into oblivion.

This show is a must for anyone who is dealing with somebody with dementia or Alzheimer’s. It is a heartbreaking picture inside their mind.

Mr. Langella is definitely my pick and winner for Best Actor in a play. This play will also be on the list of Tony nominations for Best Play. Well deserved and well worth watching.

Suzanna BowlingJanuary 18, 2023
Read More
Scroll for more
Tap
Hamilton’s Lin-Manuel Miranda and his father Luis A. Miranda, Jr. To Be Honored At Luncheon With Girl Be Heard
Jay Johnson Armstrong Goes For His Dream