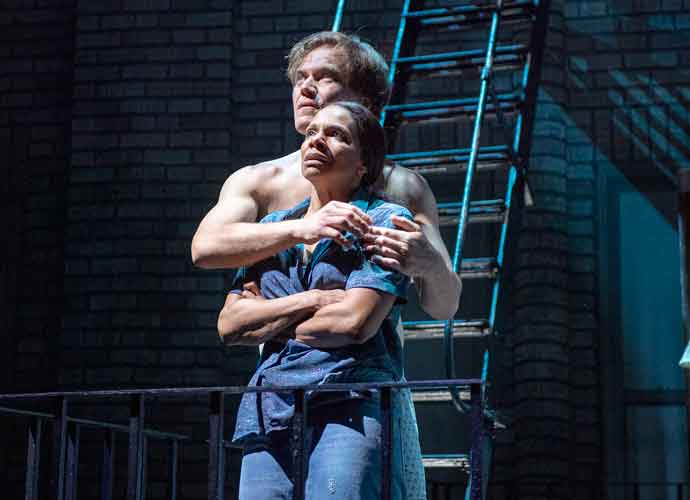 “We gotta connect. We just have to. Or we die.” Johnny

Terrence McNally’s 1987 Frankie and Johnny in the Clair de Lune, is like an urban Barbara Cartland novel. As I was watching it, I could see the #MeToo movement having conniptions, but if women were honest what everyone really wants is a man who loves and wants as deep as Johnny (Michael Shannon).

Johnny states they are “a man and a woman. Not young, not old. No great beauties, either one.” Johnny

A bach plays on the radio th play begins under a full moon. Johnny and Frankie (Audra McDonald) make hot and blissful love as we voyeuristically watch. Neither have much, Johnny is a chef at the Greek diner Frankie works at. Frankie’s apartment is shabby and the bed is a pull out couch. This is their first date but Johnny wants to forge a bond beyond one night. He sees in Frankie a kindred spirit. He pursues her for more and at times seems like a stalker, but the stakes for Johnny are high. Johnny revues to take no for an answer as he goes after essentially what they both desperately need. As the night unfolds, they slowly begin to reveal themselves to each other as they take tentative steps towards the possible start of a new relationship.

“Everybody has scars.” Frankie

The play gets its name because Johnny calls the radio station to request the most beautiful music ever written… Claude Debussy’s “Clair de lune”. Johnny, buoyant with love, beckons Frankie to join him at the window and to bask… in the clair de lune.

The one thing that does not work is that though Shannon and McDonald are terrific actors, they seem illogical, mostly because we never really see the walls crack in McDonald’s Frankie. I watched as the audience that attended with me, all fell for the one track and sexually charged Shannon, except Ms. McDonald.

F. Murray Abraham, who originated Johnny is now heard as a radio announcer reluctantly playing the requested song. That was a nice touch.

Again this felt like a paperback romance come to life, between the most unlikely of characters and we wanted to buy it.

Suzanna BowlingJanuary 22, 2023
Read More
Scroll for more
Tap
The Tony Winners and Their Awards
Tony Round Up And In The Press Room