Free Concerts in the Park 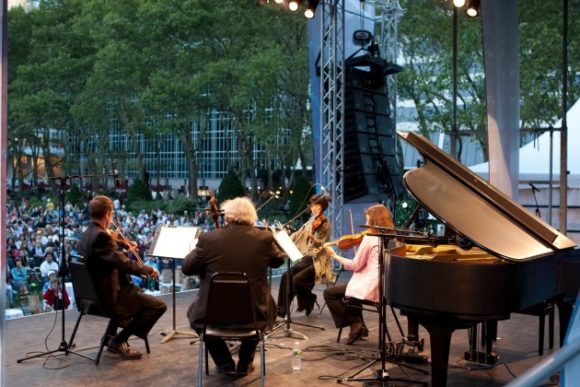 Free Concerts in the Park

A dynamic musical team, Ray Chew and Vivian Scott Chew have worked with Carnegie Hall to produce some of the most popular concerts in memory, including A Night of Inspiration and Sing Along: The Music of Stevie Wonder. Be uplifted when they lead a host of great musicians, including Anthony Brown & group therAPy and The String Queens, for an evening of inspirational music from diverse traditions. Outstanding soloists, a stellar instrumental ensemble, and some unforgettable surprises await when the music moves you and your spirit rises.
Presented by Carnegie Hall in association with Chew Entertainment.

Stunning virtuosity and a passionate dedication to advancing diversity in classical music make the Harlem Quartet one of the most exciting ensembles of our day. The ensemble has been praised by The Cincinnati Enquirer for “bringing a new attitude to classical music” and by The New York Times for its “panache.” The quartet was founded in 2006 by the Sphinx Organization, a national nonprofit dedicated to transforming lives through the power of diversity in the arts. After the Harlem Quartet inspires you, experience another great ensemble—the Sphinx Virtuosi—on Friday, October 11 at Carnegie Hall, as they explore works by minority composers.

Carnegie Hall Citywide Night is a colorful celebration of music by dynamic and diverse performers. From Brazilian folk fusion to Irish fiddle to zydeco, the music is free and fun all night.
Matuto, whose name means “country boy” in Brazilian slang, has been described as “weird and wonderful … unorthodox and delightful” by JazzTimes. Hear why when this lively quartet takes Brazilian folk music and shakes it up with the flatpicking guitars and fiery fiddles of American bluegrass to create a musical experience the group likens to “Brazilian Carnival in the Appalachian Mountains.” Anchored by Clay Ross’s guitar and Rob Curto’s accordion, Matuto’s joyous explorations of folk, world, and jazz styles are invigorating.

Consider every possibility for what’s exciting and daring in Irish fiddle playing and Eileen Ivers surpasses them all. This Grammy Award winner, Emmy nominee, and nine-time All-Ireland Fiddle Champion has played with major orchestras around the globe, as well as such luminaries as Sting, The Chieftains, Patti Smith, and countless others. Called “the Jimi Hendrix of the violin” (The New York Times), she is deeply rooted in tradition while remaining dedicated to exploring new possibilities for the instrument.
Zydeco—that intoxicating, accordion-driven South Louisiana blend of Cajun, Afro-Caribbean, and African American popular music—burns brightly when Nathan & The Zydeco Cha Chas perform. Nathan Williams’s accordion playing sets the boisterous tone, while his brother Dennis’s jazz-tinged guitar brings a unique flavor to the music. Bass, drums, and rubboard add extra spice to this Louisiana-styled musical gumbo for a performance that will get your feet moving, fingers snapping, and heart pounding.

Experience the fire in Thandiswa Mazwai’s music. The flame was kindled growing up in Soweto during the dismantling of apartheid and ignited when she joined the visionary band Bongo Maffin. Mazwai’s politically aware lyrics and emotional vocals propelled the band to South African stardom. You can now hear her solo and be captivated by her use of traditional Xhosa rhythms, reggae, kwaito (a South African blend of hip-hop and house music sounds), funk, jazz, and more to create music that’s simply incendiary.

Hear Poulenc’s effervescent wit, Mozart’s grace, and Beach’s soaring Romanticism in music performed by Ensemble Connect, “one of the strongest ensembles in the city” (New York Classical Review). The bubbly outer movements of Poulenc’s Trio for Oboe, Bassoon, and Piano frame a gorgeous central section, while Mozart’s Quintet for Horn and Strings in E-flat Major delights with virtuosic horn passages. To conclude the concert is Amy Beach’s Piano Quintet, a rapturous work flowing with rich melodies and boundless invention.

Ensemble Connect is a program of Carnegie Hall, The Juilliard School, and the Weill Music Institute in partnership with the New York City Department of Education.

Ensemble Connect is also supported, in part, by endowment grants from The Kovner Foundation.

“Dulcet-toned” (The Wall Street Journal) mezzo-soprano Kayleigh Decker has a must-hear voice. A superb song interpreter, she was named one of Caramoor’s 2018 Schwab Vocal Rising Stars; she was also part of the inaugural season of Renée Fleming’s SongStudio at Carnegie Hall. Decker’s operatic triumphs include a recent Lyric Opera of Chicago debut in Mozart’s Idomeneo, and title roles in operas by Rossini and Handel. She has also been featured on the concert stage, singing in Bach’s Mass in B Minor, Handel’s Messiah, Mozart’s Requiem, and more.

Take a jazz journey with outstanding vibraphone and marimba player Stefon Harris and his band Blackout. Named Best Vibraphonist by DownBeat’s 2018 International Critics Poll, Harris spins nimble solo lines that dart and swirl, while his stellar band complements his playing with its own flights of invention. On their most recent album, Sonic Creed, Harris and Blackout chart new melodic and rhythmic paths in a compelling reflection on present-day African American life, featuring original tunes and classics by such jazz giants as Wayne Shorter, Bobby Hutcherson, and Horace Silver.

There’s a message behind Bronx-born, beat-driving Maluca Mala’s music. Her inspiring lyrics, sung in Spanish and English, encourage Afro-Latinas to be proud of their identity, push against European beauty standards, and reject gender stereotypes. Fusing hip-hop and merengue—a dance rooted in her Dominican heritage—with electronic dance music, Maluca Mala has dubbed her style “experimental tropical punk, ghetto tech, and hip-house.” It’s won her a large fan base, including Grammy-nominated singer Robyn, with whom she recently collaborated.

Folk, rock, R&B, and blues burn brightly when Toshi Reagon and her band BIGLovely perform. Called “one helluva rock’n’roller-coaster ride” by Vibe magazine, her vocal style ranges from a “dirty blues moan to a gospel shout to an ethereal croon” (The New York Times). Reagon’s dedicated activism for women’s rights sings out even more passionately when she’s backed by BIGLovely—a who’s who of outstanding NYC musicians. Be entertained, energized, and empowered by this remarkable winner of an Outmusic Award and honoree of the National Women’s History Project.

MAGDALENA KUZMANATE RASKIN Saturday, April 18, 2020 at 3:00 p.m.St. Michael’s Church225 West 99th Street (at Amsterdam Avenue) | Manhattan
In 2019, Magdalena Kuzma was one of 10 young singers who were selected from a global pool to be mentored by Renée Fleming in the inaugural year of SongStudio, a Carnegie Hall initiative that explores the future of the song recital. Kuzma is a recent graduate of Oberlin College and Conservatory, where she studied psychology and voice. Kuzma has sung song masterpieces as well as operatic roles that include Miles in Britten’s The Turn of the Screw, Drusilla in Monteverdi’s L’incoronazione di Poppea, and the title role in Offenbach’s La belle Hélène.

When you hear Bridget Kibbey, you’ll toss aside everything you thought you knew about harp music. Praised for her “bravura and sensitivity” (The Washington Post), her daring and diverse programming spans the Baroque era—her performance of Bach’s Toccata and Fugue in D Minor is a YouTube sensation—to explorations of Brazilian dance music. She regularly performs with The Chamber Music Society of Lincoln Center, is a passionate advocate for living composers, and has toured and recorded with such superstars as Plácido Domingo and Dawn Upshaw. In this concert, she is joined by guitarist João Luiz Rezende and percussionist Samuel Torres.

When you hear Maurice “Mobetta” Brown, you’ll experience a gutsy musician who is a master of contemporary jazz, blues-rock, and cutting-edge hip-hop. Brown’s sound is one-of-a-kind, rooted in bebop and spiced with hip-hop hooks. His breakthrough album, Maurice vs. Mobetta, shows him wearing three hats as musician, MC, and producer. Remixed trumpet parts dance over hip-hop beats while guests Talib Kweli, Prodigy, and Jean Grae swap rhymes with Mobetta, Brown’s hip-hop persona. Expect this and more from a musician who is ever-evolving and constantly pushing the envelope.

Drummer, producer, singer, and Yoruba priest (or Babalawo) Otura Mun is the visionary creator of ÌFÉ. This Puerto Rico-based project fuses Cuban rumba, sacred Yoruba praise songs, Jamaican dancehall music, and American R&B with cutting edge electronica. With its ensemble of singers and dancers, ÌFÉ conjures trance-like moods that shift from otherworldly serenity to the raw and ecstatic. NPR’s Felix Contreras called ÌFÉ’s debut album IIII+IIII (2017) “one of those I can’t figure out how I ever lived without.” Hear ÌFÉ live and you will feel the same.

Álfheiður Erla Guðmundsdóttir is an award-winning soprano who has delighted audiences in her native Iceland and abroad. She won two awards at the 2015 International Giulio Perotti Singing Competition, and was selected to participate in the inaugural year of Carnegie Hall’s SongStudio under the guidance of Renée Fleming. Opera is also an integral part of her career: She has sung such roles as Susanna in Mozart’s Le nozze di Figaro, Marzelline in Beethoven’s Fidelio, Adele in R. Strauss’s Die Fledermaus, and others.