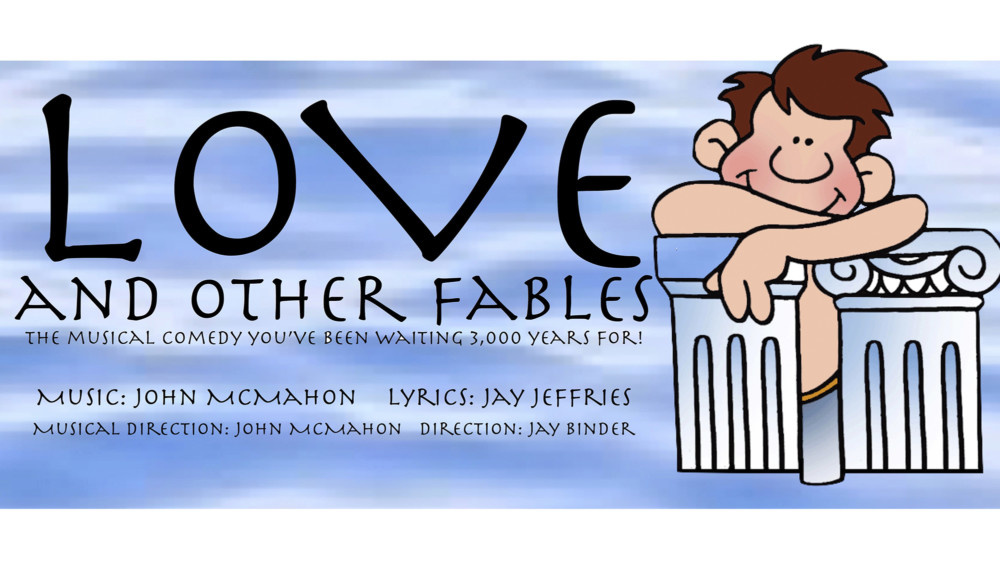 Amas Musical Theatre (Donna Trinkoff, Artistic Producer) and The Amas Musical Theatre Lab will present staged readings of Love and Other Fables, a screwball romantic musical comedy, with a book by John McMahon and music and lyrics by Jay Jeffries. Directed by Jay Binder with music direction by Henry Aronson, the readings will be held on Tuesday, September 26th at 11am and 2:30pm at The Chelsea Studios, Room 604 (151 West 26th Street). The readings are free and the seating is limited. For reservations, please email boxoffice@amasmusical.org or call 212-563-2565.

Love and Other Fables is a new, completely original “Screwball Romantic Musical Comedy”- a love letter to the Golden Age of Broadway. In this madcap imagining of his life, we watch the then unknown Aesop create his eternal fables, woo the headstrong girl of his dreams, defend King Croesus and his wealth by untangling the mind-boggling conundrums of The King of Egypt and ultimately become the unlikeliest hero of the greatest fable of all. There are mistaken identities, love and hate at first sight, declarations of war, death and taxes, international imbroglios, tap-dancing Greek soldiers, one very impatient Egyptian and, of course, a wedding.

The cast will include a star-studded cast of Broadway performers including Arnie Burton (The Inspector General, 39 Steps), Rachel Colof (Urinetown, Fiddler of the Roof), Ellen Harvey (Present Laughter, The Phantom of the Opera), Alli Mauzey (Hairspray, Cry Baby), Brad Oscar (The Producers, Something Rotten), Austin Pendleton (The Last Sweet Days of Isaac, The Diary of Anne Frank), Ed Watts (Scandalous, Transport), and others.

John McMahon (Book) Credits include the “Not Since Carrie” Broadway production of Prince of Central Park, and the revival of the Gershwin musical Oh! Kay! A Bistro Award Winner, working with Joan Rivers, Heather MacRae, Lea DeLaria, Lilliane Montevecchi and the legendary Mr. Ruby Rims. His jazz arrangement of Sondheim’s “The Ballad of Sweeney Todd” can be heard on Lea DeLaria’s CD “Play it Cool” on Warner Brother’s Jazz Label. As Laura Bell Bundy’s longtime accompanist and Musical Director, he conducted both her cabaret acts at Joe’s Pub and at Feinstein’s in NYC.

Jay Jeffries (Music & Lyrics) wrote lyrics and sketches for the Upstairs at the Downstairs revue’s Instant Replay, Free Fall, and Weigh-In (Way Out), and the Manhattan Arrangement. In addition to writing specialty material for Laura Bell Bundy, Marta Sanders, Barbara Cook, and countless cabaret performers, he wrote lyrics for the off-Broadway revues, Fun City at the Jan Hus and For Love or Money at the Circle Rep.

Jay Binder (Director) has cast over 70 Broadway productions, including the Tony Award-winning productions of The Lion King, A Gentleman’s Guide to Love & Murder, Dames at Sea, Nice Work If You Can Get It, Gypsy, The King and I, Lost in Yonkers and Jerome Robbins’ Broadway. In addition, Mr. Binder was one of the founders and continues to be a driving force behind the highly-acclaimed Encores! Great American Musicals in Concert series at City Center in New York City. His work casting this series led to the Tony Award-winning revival of Chicago. For television, he cast the Emmy Award-winning series I’ll Fly Away and was the East Coast Casting Director of Warner Brothers Television for five years. For film, he cast Six by Sondheim (HBO), Hairspray, Dreamgirls, Chicago, and Nine. He is the recipient of 12 Artios Awards, the highest honor in casting. He has been an artistic consultant for Disney World and National Artists Management Company. He was creative consultant on the PBS special, My Favorite Broadway, The Love Songs, hosted by Julie Andrews. On Broadway, he was the associate director of Lolita and Happy New Year. He has worked as a director at numerous regional theaters across the country. Those credits include Present Laughter at The Acting Company, Rex, Jumbo, and Best Foot Forward at The York Theatre and Say Yes! at the Berkshire Theatre Festival. In 2016, Binder Casting was acquired by RWS Entertainment Group. Through RWS, Mr. Binder will be developing new work for the theatre.

G. H. HARDINGNovember 30, 2022
Read More
Scroll for more
Tap
She Say’s: If Only Had Some More Umph
How Do You Know Whether the Tree in Your Backyard Is a Hazard?