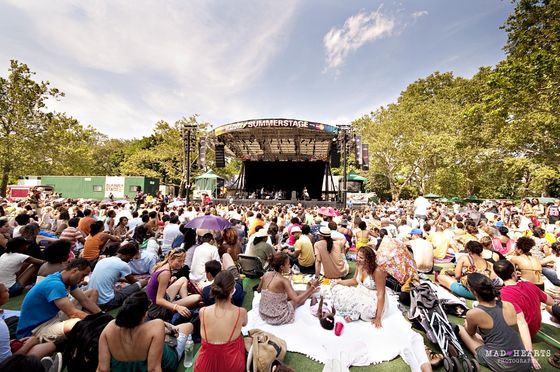 Suzanna Bowling
The City Parks Foundations’ SummerStage has teamed up with FranceRocks and Bureaux Export to showcase some of France’s biggest names in music and will be held at SummerStage in Central Park on June 20th starting at 6PM.
This year’s headliner is award winning singer-songwriter, Vianney. The 23-year-old has a platinum selling album (Vianney), a Victoires de la Musique (the French Grammy equivalent) for best male artist, and a sold out European tour under his belt. Catch him performing his affective tunes with just his voice, a guitar, and a loop pedal at Fete de la Musique. Vianney will be joined by the idiosyncratic Chassol, a pianist, arranger, and musical director who’s known for his trailblazing “ultrascores,” and collaborative work with Phoenix, Sébastien Tellier, and Frank Ocean. Opening the festival will be DJ and classically trained pianist, Joakim, who is also a producer, visual artist and sound designer. His performance will be the United States premiere of his work Semi Conductor, created during his residency at Studio Venezia at the 2017 Venice Art Biennale.
Event Info:
Event: Fête de la Musique: Vianney / Chassol / Joakim, in association with FranceRocks and Bureaux Export
Date/Time: Tuesday, June 20th  from 6-10PM
Where: Rumsey Playfield in Central Park
Tickets: Free

City Parks Foundation is thrilled to announce the 2018 season of SummerStage, New York City’s largest free outdoor performing arts festival, bringing more than 100 performances to Central Park and 17 neighborhood parks throughout the five boroughs. This year’s festival, presented by Capital One, will showcase over 200 unique artists hailing from New York City and around the globe, performing shows across a diversity of genres and disciplines, including indie-rock, hip-hop, Latin, jazz, R&B, salsa, opera, contemporary dance, and spoken word.