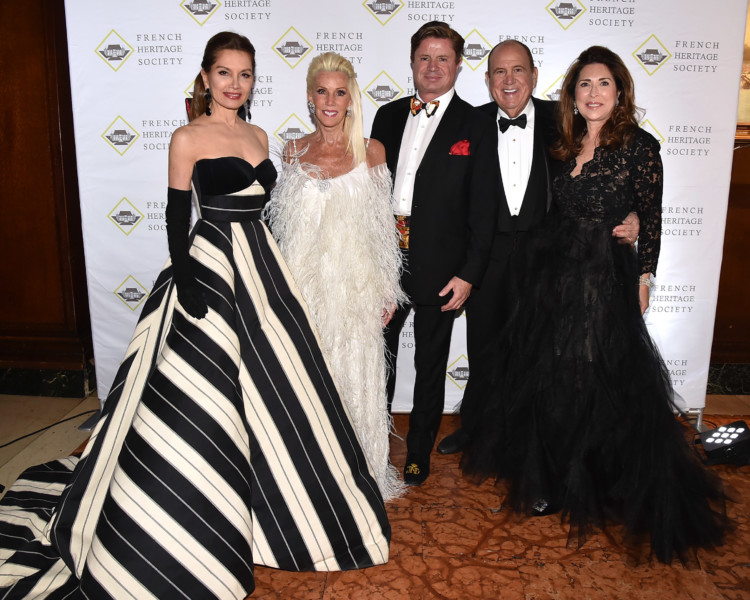 “No couple in New York could be as popular and as adorable as the Hedberg’s,” said Board Chairman Elizabeth Stribling. “They are so nice, so philanthropic, and so Francophile. Margaret’s aunt created something called The International Debutante Ball; my mother was on the committee of this ball in 1960. We go back a long, long time. Her husband Gregory is a noted scholar and curator, and the author of the scholarly text Degas’ Little Dancer, Aged Fourteen“. In accepting their award, Margaret Hedberg commented, “Look at all of you, you look so beautiful. I think it’s the chicest crowd in New York. I will just say one thing…merci mille fois!” Her husband continued, “When we’re with French Heritage Society, we’re in French heaven”. “FHS continues to inspire us all”, agreed Geoffrey Bradfield. “Marcel Proust wrote, ‘If we are to make reality endurable, we must all nourish a fantasy or two.’ Tonight, receiving this splendid honor, is a moment in my life that I will always cherish.”  Board member and special event chairman CeCe Black presented Geoffrey with his award, a Lalique trophy.

Guests all dressed in the most formal black or white; the ladies in long gowns and many of the men, including the New York Chapter Co-Chair, Guy Robinson, in white tie and decorations. Board Member Jean Shafiroff wore a striped gown with a train and a matching masque by designer Victor de Souza, who accompanied her. Odile de Schiétère-Longchampt, New York Chapter Co-Chair and the evening’s Design Consultant, created stunning (nearly) black and white flower arrangements.

FHS President Denis de Kergorlay traveled from Paris especially for the evening and announced that Elizabeth Stribling will receive the Commandeur de la Légion d’Honneur from the French Minister of Forgein Affairs, Jean-Yves Le Drian, on Monday at the Quai d’Orsay (the Ministry of Foreign Affairs) in Paris. Already a member of the Légion d’Honneur, this “upgrade” is an honor rarely bestowed on an American.