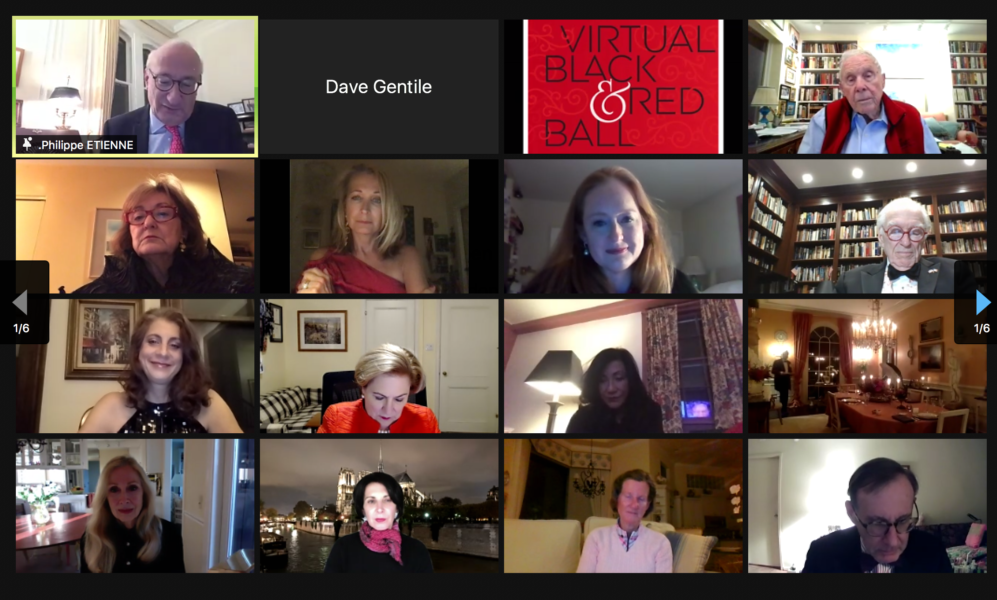 I very much believe in the mission of French Heritage, and the work you have done,” said Couturier, “always choosing the right path, to help maintain the distinctive and integral French culture. I am deeply humbled by your kind attention.“  H.E. Philippe Étienne, Ambassador of France to the U.S., Mr. Jérémie Robert, Consul General of France in New York, Mr. Gaëtan Bruel, Cultural Counseor of the French Embassy, all joined in the tribute to Couturier, as favorite son of France, who is now proudly American, still “sharing the style of our nation.”  The highlight of the evening was a tour of Couturier’s magnificent home in South Kent, CT.

The night was a jolly success, culminating in three different virtual after parties, hosted by Robert Couturier, CeCe Black, and Elizabeth Stribling.

Said Jennifer Herlein, French Heritage Society Executive Director, “We are grateful to everyone who attended French Heritage Society’s first virtual ball! Our annual gala provides critical support for our mission, allowing us to award restoration grants and provide internship opportunities to university students in France and the United States.  While the pandemic has impacted much of what we do, important restoration work continues at our grant sites and some students have elected to do their internships remotely. Our mission continues, FHS makes gifts and provides work to craftsmen, protecting the future of the French architectural and cultural legacy both in France and the United States. French Heritage Society ensures that the treasures of our shared French architectural and cultural heritage survive to inspire future generations to build, dream and create.”

Suzanna BowlingJanuary 14, 2021
Read More
Scroll for more
Tap
Get Your Front Row Seats at Metropolitan Zoom
What To Watch November 24th To Take Away The Blues