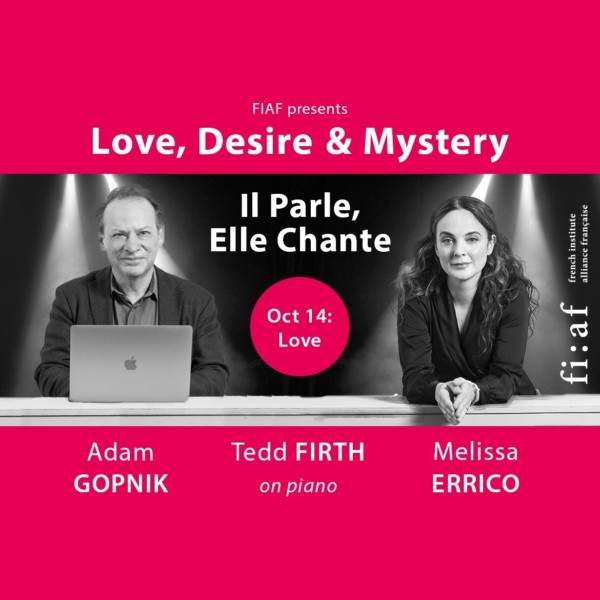 Join this special virtual concert series with the French Institute Alliance Française (FIAF) here in NYC: Il Parle, Elle Chante – Love, Desire & Mystery. In this entertaining and enticing new series that begins on 10/14, Tony Award-nominated chanteuse Melissa Errico, in collaboration with Adam Gopnik, elegantly weave together music and conversation for a trio of concerts delving into every aspect of the great French obsession: l’amour fou, or crazy, overpowering, all-consuming love.

Part 1 of this 3-part series will take place on Wed. 10/14 at 7pm, streamed online live from The Florence Gould Theatre at FIAF on East 59th Street. Part 1 centers specifically on “Love”, a noteworthy preoccupation in France. It begins with the invention of the love song in the feminist medieval court of Eleanor of Aquitaine, and winds its way through the long history of the French cult of love. Errico will present her favorite French love songs—including Michel Legrand’s “Valse des Lilas,” among others—as well as examples of the American love of France, including Cole Porter’s “I Love Paris,” Sondheim’s portrait of Seurat, and additional delectable surprises. Errico will also perform the world premiere of a love song written by Gopnik and David Shire from a musical they are developing about Eleanor of Aquitaine.

Part II – “Desire” and Part III – “Mystery” will take place later this year, and through these evenings, Errico and Gopnik investigate and illuminate the cycle that France first offered the world—of how love becomes desire, how desire is cloaked in mystery, and how then the mystery of desire reveals the madness of love again. Errico previously collaborated with FIAF in 2019, curating the popular CinéSalon series Summer of Michel Legrand that honored the great French composer. Keep me posted and here’s the details again for Part 1: