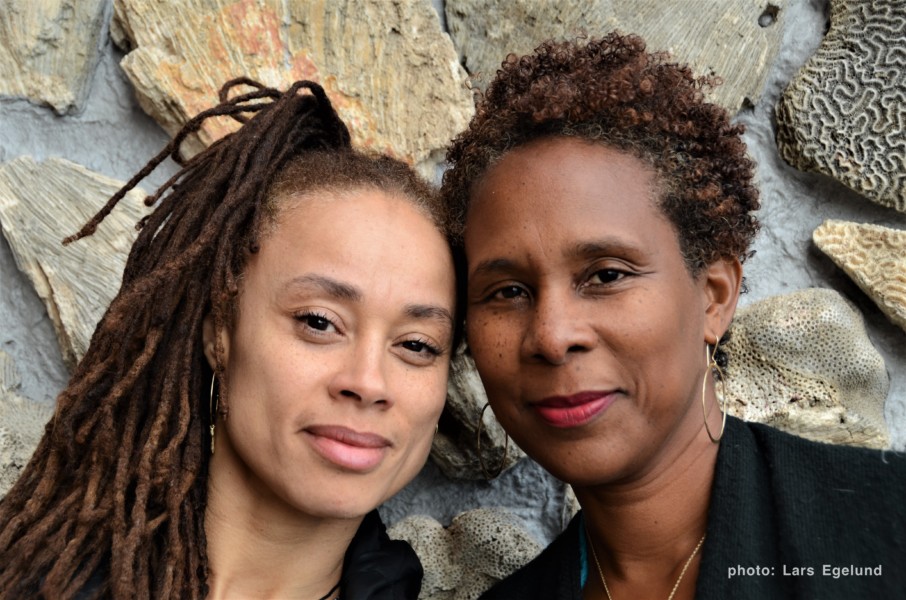 This year something remarkable has happened in the world – a digital hybrid of the two artists as a bridge across the Atlantic, merging their bodies, nation and narratives has been gloriously painted across time.

In 2018, history was made when artists La Vaughn Belle and Jeannette Ehlers created and launched the first public monument of a black woman in Copenhagen. The seminal sculpture generated global awareness and acclaim on the centennial year commemorating the sale by Denmark of the Virgin Islands to the United States on March 31, 1917:

On March 4, 2021, the Danish government granted permission to permanently install their groundbreaking public artwork, I AM QUEEN MARY, in front of a former colonial warehouse in Copenhagen. To now build the permanent sculpture, and a twin monument on St. Croix, USVI – an international crowdfunding campaign and an innovative Augmented Reality program will also be unveiled for the first time ever to support the rebel queen being immortalized.

The monument references Mary Thomas, who came to be named as one of the “Queens of the Fireburn”, leading the largest labor revolt in Danish history in 1878. Fifty plantations and most of the town of Frederiksted in St. Croix were burned in protest of slavery-like conditions. Following significant damage to the sculpture over the last two years, a fundraising campaign to raise $1.5 million for a bronze casting of the figure and a reinforced coral stone plinth will launch on June 8th. The funds raised will ensure that this towering monument at the entrance to Copenhagen’s port acknowledges the legacy of slavery and European colonialism for generations to come. To allow for public support, the Kickstarter campaign will collect donations to rebuild this important landmark.

An exclusive Augmented Reality experience launched with the digitized version of the figure in dynamic and never seen before detail. The AR version used cutting edge browser based technology that eliminated the need for an app. It’s was designed to hold space for the figure and generate new conversations around the digital avatar that will be circulated during the crowdfunding campaign. Visitors were able to see and walk around the completed 1:1 AR sculpture, take a photo and share it in support.

“We are so grateful to the Danish Ministry of Culture for recognizing our work in this way and ensuring that this significant part of our shared history will be told,” said Jeannette Ehlers. “By making I AM QUEEN MARY  we have created a space for black people to see ourselves in an empowering manner in public space”. La Vaughn Belle said, “I AM QUEEN MARY centers the narratives of the courageous human beings who fought for their dignity and their survival under the harshest of living and working conditions. They deserve to be remembered.”

Danish Minister of Culture, Joy Mogensen states: “Only if we remember our past can we get well into the future. Therefore, we must be aware of history in all its diversity and all its nuances. I Am Queen Mary will be a strong and lasting physical memory of a dark side of Danish history, which we must not forget – and a concrete reminder in Copenhagen’s cityscape that Denmark’s history is created by many incredibly different people. Not just by kings and war heroes.“

The crowdfunding campaign will launch on Kickstarter on June 8th. The AR live stream on May 19th was powered by bettar.io and produced by ArtXR.io / Eric Prince. The Kickstarter is directed by Lars Juhl, Visionmaker and the monument project is managed by Anders Juhl, Bridging Arts Agency. Read and participate on www.iamqueenmary.com or follow the campaign at @supportiamqueenmary.