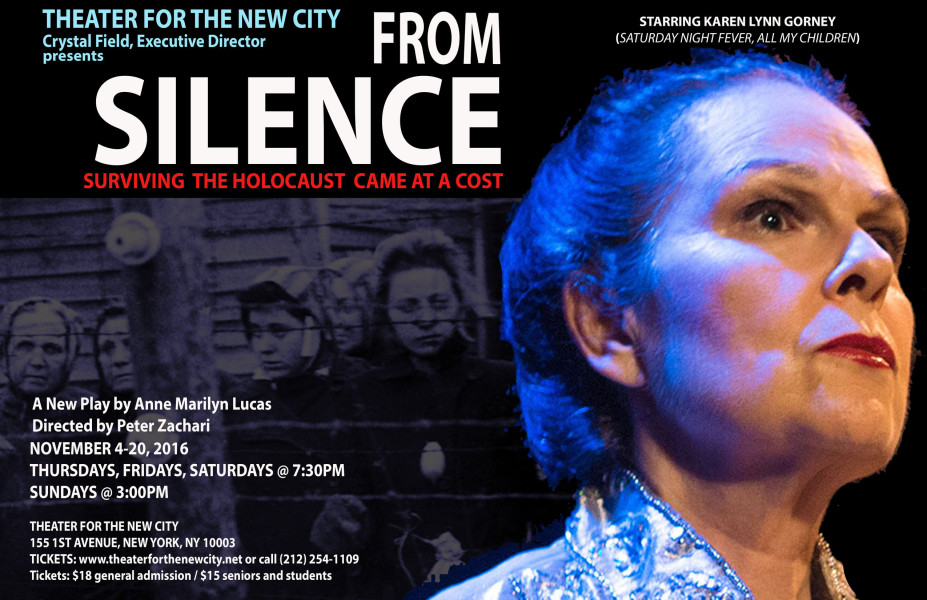 From Silence The Holocaust is Remembered.

From Silence The Holocaust is Remembered.

The world premiere of From Silence by Anne Marilyn Lucas, opens this weekend at Theatre For A New City. The play is a story of one Holocaust survivor’s silence and its impact on the next generation.  In the play, a rigid but loving grandmother Esther Gold faces her present with her past.  She has preserved her mental balance by keeping her wartime experiences secret, but finds her safe world turned upside down when local authorities place her synagogue on lock down in response to a terrorist threat and her granddaughter is being held inside.

During the endless waiting, Esther travels back in her mind seeing the results of her decision to remain silent about the Holocaust and its effect on her family. She re-experiences her years in Ravensbrück, Hitler’s concentration camp for women and re-lives the many times her daughter and granddaughter begged her to speak about her wartime experiences. Ultimately, she is shaken out of her fear of sharing her past. She realizes it is her duty to speak out, but will it be too late for her granddaughter to hear?

Playwright Anne Marilyn Lucas, is originally from New York, is now the Director of Theatrical Productions at The House of The Seven Gables in Salem, MA, where she has written and directed a succession of plays and created biographical revues of classic Broadway composers with her own contemporary librettos. She trained at Webber Douglas Academy of Dramatic Art in London, The Royal College of Music, Cleveland Institute of Music, Boston University (MFA) and Lesley University in Cambridge, MA. She was a professor in the theater department of Salem State University for ten years. Her father in law, Norman D. Cohen, was President of the American wing of the Weitzman Institute of Science in Israel until his death.  She and her family are members of Temple Emanu-El Marblehead, which is headed by Rabbi David Meyer, a frequent commentator on NPR.

T2C had a chance to take to this playwright discovering more.

T2C: Why base your play on the book “Say the Name: a Survivor’s Tale in Prose and Poetry” by Judith Sherman?

Anne Marilyn Lucas: The first set of plays I wrote were based on Nathanial Hawthorn. I went to a lecture at Harvard and Judith Sherman ‘s granddaughter and her daughter were reading her poems. I was riveted and my brain kept saying it s a play, its a play. Later at the reception Judith came over to me and said “how do I know you?” I was keeping a Jewish home and I was involved in the community my father in law was a Jewish philanthropist. So I wrote a play.

T2C: Is Say the Name and From Silence the same play?

Anne Marilyn Lucas: No Say the Name was at Harvard

T2C: In Say the Name, a Holocaust survivor’s memoir, your play has been used as a text in the Divinity School. How did that happen?

Anne Marilyn Lucas: The professor David Carrasco is who persuade Judith to write her book. I was very moved from what I learned From Silence. I was surprised how negatively people reacted to trauma passed on from others. I talked and interviewed a number of men and women and how the trauma had traveled through the 2nd 3rd and even 4th generations.

T2C: Do you use the secret drawings by imprisoned women of Ravensbrückin in your play?

Anne Marilyn Lucas: I have not used those. Because the play that is being done in New York and this has been left up to the director.

T2C: In From Silence your character survived Ravensbruck have you been there?

Anne Marilyn Lucas: I haven’t been there. One of our actresses Nora Falke went this summer to do research in playing her part.

T2C: How does her silence affect her daughter?

Anne Marilyn Lucas: The silence from her family is imagined and felt through the mother and they have their own anxieties. Eugenics means that genes get marked. It is passed down differently

Anne Marilyn Lucas: Anxiety dream that are strangely similar as to what happened to her grandmother. She writes poetry to deal with it. In which the Grandmother is not happy as she does not want people to know.

T2C: Would you say keeping silent is allowing the hatred to continue?

Anne Marilyn Lucas: I think it can be. Elei wesiel stated “If you do not speak it will happen again.”

T2C: Is the memory of the holocaust being buried because those who lived it are almost gone?

Anne Marilyn Lucas: Yes, I think that’s a part of it. Most who lived through it were children, There is a second generation that is active in a movement now.

T2C: How can we stop this kind of terror from happening again?

Anne Marilyn Lucas: Telling the story, having the courage to tell the story even when it is not safe.

T2C: What do you think the biggest fallacy is of the Holocaust?

Anne Marilyn Lucas: People saying it never happened. I would like people to have a sense of hope that if they open the lines of communication things can be healed if they are willing to talk about it. The show heals a wound in the family. Healing is possible. This journey is a journey of hope. There is a lot of humor in this play.

Opening night is Nov. 5th and Performances are Thursdays through Saturdays at 8:00 PM and Sundays at 2:00 PM.