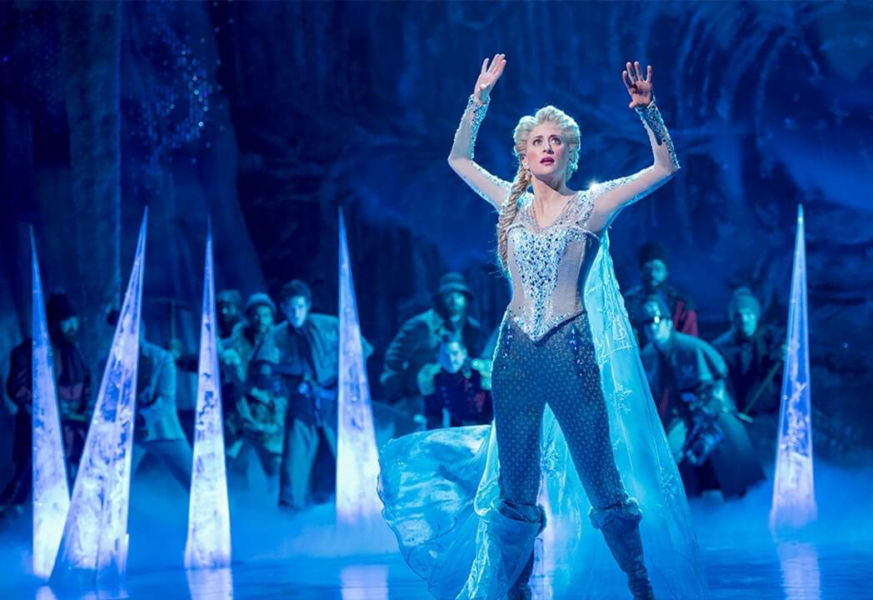 Like the principal character of this charming family friendly musical, Queen Elsa, once you have made it downtown through the snow and ice of a Windy City winter, and secured yourself in your cozy seat at the classic Cadillac Palace Theatre, the cold, indeed, will not bother you anyway. Neither will the crowds, or the traffic, or your facemask, or your required proof of vaccination. The national tour of Disney’s Frozen the Musical is knocking the city of broad shoulder’s audiences out on a nightly basis. Stunningly costumed, breathtaking special effects and sumptuous vocals punctuate this enticing musical from start to finish.

For those not in the know, Frozen is based on the 2013-billion-dollar grossing, Oscar Award-winning, modern day animated classic of the same name, originally inspired by Hans Christian Andersen’s fairy tale, The Snow Queen. No parent with a young, impressionable daughter isn’t familiar with the infectious soundtrack that featured Tony Award-winner, Idina Menzel, and actress, Kristen Bell, voicing the royal pair. Frozen is a tale of two orphaned sisters of noble descent, who must whether the weather when their kingdom becomes buried in the snowfall of a perpetual winter. With the aid of a magical snowman, Olaf, a reindeer, Sven, and an Ice Harvester, Kristoff, the spunky Anna set out to help her estranged sister born with magical abilities. Curse, godsend or fluke, Elsa’s inability to control her weather altering powers set forth a drama of isolation, self-discovery and acceptance.

Like Wicked the Musical, Frozen worked best when the women took center stage. You cannot take your eyes off of a luminous Caroline Bowman, more than up to the vocal gymnastics required to efficiently sell her Queen Elsa. Caroline Innerbichler brought zeal and fervent enthusiasm to her rendition of Princess Anna. On top of the familiar Kristen Anderson-Lopez and Robert Lopez songs from the original film, this tour introduced a brand-new duet, “I Can’t Lose You” which Bowman and Innerbichler delivered with true gusto. Like Timon from Disney’s The Lion King, Olaf the snowman is played as a three-dimensional puppet attached to puppeteer and comedian, F. Michael Haynie. His whimsy and winning silliness captured the attention of all the little ones sitting in close proximity. Mountain man, Kristoff, has been dumbed down, played as a simpleton, but Mason Reeves soared effortlessly through Rob Ashford’s powerful and athletic choreography. Weselton (Jeremy Morse) and Hans (Austin Colby) made for efficient villains, both given monotonic solos, “Hans of the Southern Isles” and its reprise, written exclusively for the live stage show.

Director Michael Grandage met the challenges of adapting a well know film to the live stage with aplomb. Peppered with bold, eye-catching special effects provided by Jeremy Chernick and lovely scenic/costume design from Christopher Oram, including a breath-taking curtain of over 100,000 Swarovski crystals displayed as snowflakes. With this mentioned, to be completely honest, the “Let It Go” act one finale number is so above and beyond any of the new, half dozen songs written for the live production, that it truly does pull focus. Even the mid-song, quick change from regal robes to sequined, thigh-high slit glamour gown inspired audible gasps all around. Queen Elsa would most certainly be an Instagram influencer if selfies would have been included on her list of super powers. Nothing else in the following act came close to touching that seven minutes on stage. So much so that new lyrics to the song were additionally written and added as a cast wide, sing-a-long finale.

After nearly two years of performing arts lockdown, returning to the theater has been a sincere blessing. It is no secret that the St. James Theatre production of Disney’s Frozen on Broadway permanently closed because of the Covid-19 pandemic shutdown after over 800 performances. That the show has emerged as a new touring production is a miracle itself, but in the hands of Caroline Bowman and Caroline Innerbichler, Elsa and Anna happily and gloriously live on. So whether this is “For The First Time in Forever” you are experiencing “Love Is An Open Door” you will not be able to let Disney’s Frozen the Musical go!

Disney’s Frozen the Musical is now playing through January 22, 2022 at The Cadillac Palace Theatre.

Suzanna BowlingMay 6, 2022
Read More
Scroll for more
Tap
New Shows To Look For: A Girl I Know
Odd Man Out is Back