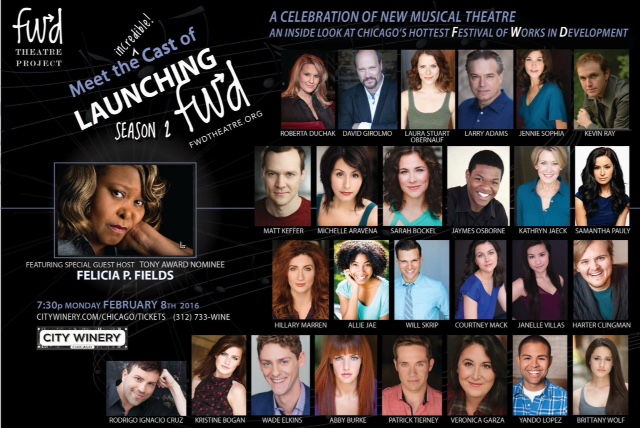 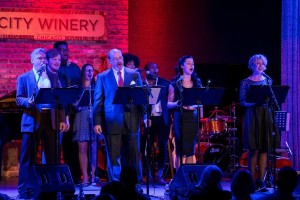 FWD Theatre Project It was a hot time for new music, theater and top Windy City talent on display, during a blustery and snowy evening in Chicago. After an inaugural season showcasing five new musicals, FWD Theatre Project is back at the City Winery to debut their promising second season lineup to a sold-out Monday night crowd. The FWD Theatre Project was the brain-child of Director and Choreographer, Amber Mak, and her capable team of Board Members including Michael Gillis, Kyle Dougan, Missy Greenberg, Karen Multer, Steve Mutler and Dominic Rescigno. Each spoke during the evening, reiterating their unique love and passion for the essential creative arts and artistic process.  “Let’s keep the arts going and get new musicals growing here, from the ground up” Mak enthusiastically clamored before passing the microphone to the evening’s Mistress of Ceremonies, Tony Award Nominee Felicia Fields. Gathering a pool of actors and singers who normally have Monday nights off proved to be no problem for the FWD crew.  Under the supervision of musical director Alex Newkirk, and enjoying a bevy of signature wines served at the Mediterranean eatery and concert venue, all were in for an evening of treats. 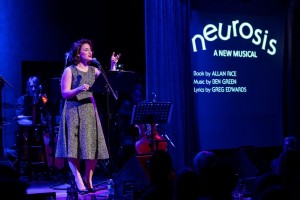 Being this was a launch party, the shows were not executed in their entirety. We were given an appetizer platter of signature performances.  Up first, Codename: Cynthia written by Board Members Steve Multer (book and lyrics) and his creative partner and wife, Karen Multer. The piece will be based on the true story of an unsung American WWII patriot, blending elements of Alias with James Bond from a female perspective.  Samantha Pauly took a break from her current nightly duties playing Amber Von Tussle in the hit Paramount Theatre production of Hairspray (also directed by Amber Mak) to join David Girolmo, Larry Adams and Kathy Jaeck on stage. The up-tempo “Somewhere in Washington” paired with “I Want This Life” and the lush duet “Why Not You Now” promised a  range both intriguing and captivating. Espionage has never been so beautiful and sounded so clever.  Speaking of beautiful, Sarah Bockel took a break from starring in the Broadway in Chicago run of  Beautiful The Carole King Story to join the cabaret as well, singing two numbers with fantastic cello accompaniment by Kelsee Van Dervall.  Neurosis A New Musical with heavy emphasis on comedy with a psychiatric twist, words by Allan Rice, Ben Green and Greg Edwards were wildly witty and wonderfully amusing.  Featuring the comic styling’s of Patrick Tierney, Wade Elkins, and Hillary Marren as well, Neurosis looks to be just what the doctor ordered. 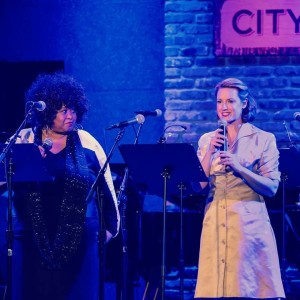 La Revolution Francaise by Alain Boublil, Claude-Michel Schonberg, Raymond Jeannot and Jean-Max Riviere with English translation by Michael Mahler, aspires to be the next Les Miserable. Set in France in 1790, the three songs showcased were powerful, full of bravado, swagger and desire. Will Skrip was simply mesmerizing during “I Am Charles Gautier.” This is a must see for sure. Tim McCorry & Michael Aman’s  Coyote may be billed as a modern tale about love and adventure, however the sharp duet of “Song of Coyote” by Rodrigo Ignatio Cruz and Yando Lopez provided many a laugh, and “If You Are Not Free” by Janelle Villas evoked such heartfelt sadness.  “If we’re not together, then we’re alone” she sang with radiant cadence.  The final piece, Central Avenue Breakdown, set in jazz soaked 1940 Los Angeles, as brother betrays brother for the love of a girl, felt like a tremendous hybrid blend of Motown, Memphis and Smokey Joe’s Café. Kevin Ray, Andrea Lepcio, D.A. Taylor and Sullen Vance Memphis were lucky enough to have one of their original songs “Woke Up Dead This Morning” performed by the megawatt sensation, Felicia Fields, with a soulful harmonica accompaniment.  She all but tore the place down to the refurbished hard wood floors. “Black Monday” with Laura Stuart Obenauf  and Jaymes Osborne and the vivacious “Hollywood Slumming” with a rousing solo by Kevin Ray, proved this piece is one to keep an eye on as well.  Did I have a favorite, too soon to tell. All five show great potential and promise. 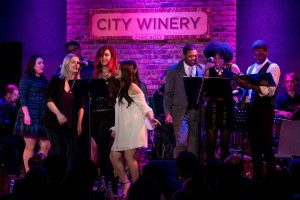 As the evening drew to a close, Mak again took to the stage with great appreciation for all involved in helping to make her dream child an auspicious reality. Saying that theater is an “art form dear to my heart” she once again surrendered the mic to Felicia Fields who added, “I’ve been every place under the sun, but when I see that skyline, I know I am home.” Closing the evening with an propitious rendition of “Sweet Home Chicago” season two from FWD Theatre Project looks to be laying the groundwork for tomorrow’s Tony winners, today. 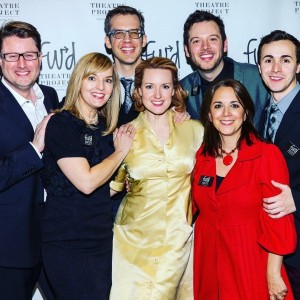 Suzanna BowlingJanuary 31, 2023
Read More
Scroll for more
Tap
My View: It Has Lots Of Good Streets And When The Neighborhood Is Imroved The Bronx Will Be Great
Body/Courage- A Comical Journey to Self-Acceptance