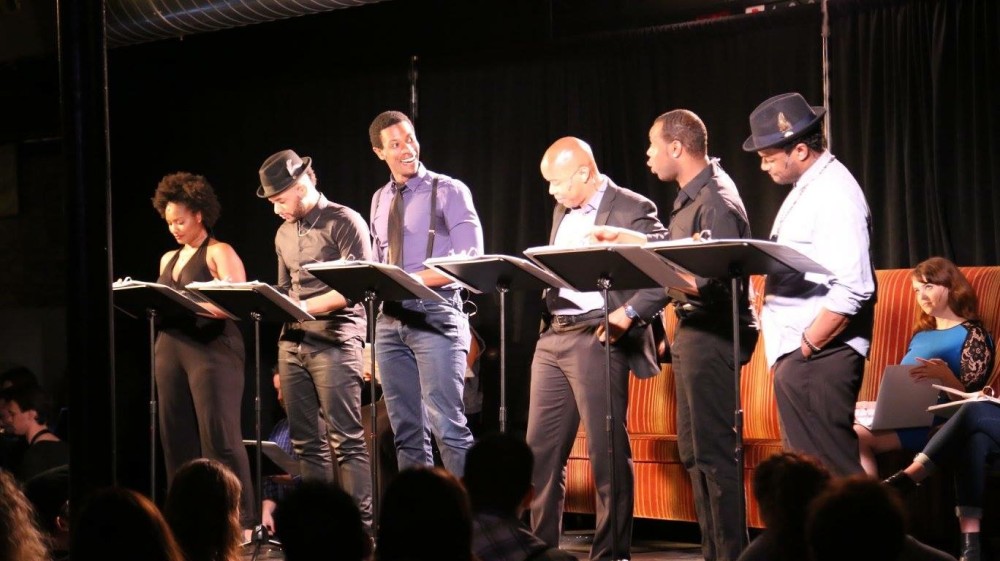 The “joint was jumpin” Monday night. By “joint” I respectfully mean Chicago Theater Works and by “jumpin” I am referring to the ambitious and standing room only reading of FWD Theatre Project’s Central Avenue Breakdown. In the middle of their second successful season producing staged readings of new pieces, exclusively for a insatiable Windy City based audience, FWD Theatre Project has clearly tapped into the primary artery which feeds the creative energy of potential hit playwrights.  The FWD Theatre Project Collective includes Artistic Director Michael Gillis, Executive Director Kyle Dongan, Founding Artistic Director Amber Mak, Communications Director Karen Multer, Marketing Director Dominic Reseigno, Musical Supervisor Alex Newkirk, Social Media Talent Madison Kennedy and Board Members Missy Greenberg and Steve Multer. I was able to speak personally with both Amber Mak and Karen Mutler about their latest staging and what was it about this material which spoke to the group, compelling them to produce it. Each woman spoke emphatically about the “utterly unique score,” the layered “intricacy’s of the music,” the “brilliant sound” and “bringing this glorious music to a new generation.”  Mak added, “Musicals about jazz music are just not being written today” which fortified the FWD team to give this script the green light.  It also aided that the evening’s Musical Director, Jeffrey Poindexter, is a Jazz MFA, so back by a talented team of musicians, including Matt Beck on the Alto Sax, Alex Blomarz on the Tenor Sax, Cory Biggerstaff on the Bass and Justin Kono on drums, the jazzed soaked score truly was the evening’s highlight. 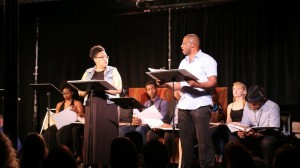 As for the story, Central Avenue Breakdown is an aspiring tale of two brothers in 1940s Los Angeles. Set against the shady backdrop of old Hollywood, the fieriest places to play live music were dueling club’s, Jack’s Chicken Basket and the Club Alabam, both on Central Avenue. As for the Breakdown portion, that included a complicated interracial love triangle, disapproving parents, drug addiction, racism and murder. The entire creative team was personally on hand for the reading that night, including  Kevin Ray (writer of the book/music/lyrics), Andrea Lepcio (book), with additional story by Suellen Vance. New to the FWD Theatre ensemble of talent this go-around, Rueben Echoles , Associate Director of the Black Ensemble Theater who helped assemble a who’s who of Chicago talent to play the cast, including NBC’s The Voice finalist Mark Hood, Evan Tyrone Martin of Porchlight Music Theatre’s latest production of Dreamgirls, Emily Rohn, spectacular in Chicago Shakespeare Theater’s recent Ride The Cyclone and Cortez L. Johnson and Sierra White as the boy’s dutiful, yet overbearing, parents. 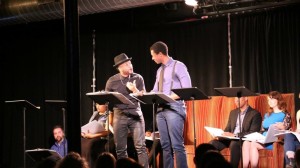 The brothers Bill and Jim Marcel, are undervalued factory workers on the assembly line by day and up and coming sax playing musicians by night. They spend much of the first act struggling to carve out their own musical identities, one a financially successful ensemble orchestra player, the other a break out original, bucking conventional musical trends in search of his own sound. “Sound is color” he boasts. “We can get to Oz and see the Wizard.” While both Hood and Martin were playing saxophone musicians, their combined white hot vocal prowess  was what really impressed the audience. The song “A New Kind of Blues” was an act one showstopper. Grounding the boys, encouraging patience instead of imminent ambitions, their deeply religious mother, also allowed to shine with the ballad “You Make It So Hard.” While one of the brothers joins the successful touring ensembles of the time, the other is seduced by a darker path of drugs, money and women, detailed in the songs “Black Monday” and  “Woke Up Dead.” “I’ve got a lighter if I need a flame” he retorts. 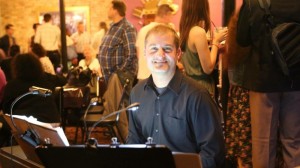 As this is a reading, it is still very much a work in progress.  I found act one utterly enthralling and entrancing. Regrettably, act two betrays the many riveting qualities of the first act. It goes far too dark, depressing, narcissistic and self-destructive. The reality and tragedy of addictions play out daily on the news, calling to mind Prince’s recent passing. I believe a stronger and more satisfying conclusion would be to have the brother’s reunite, triumphing over their individual personal adversity caused by both addiction and guilt, then evolving their sound within an industry constantly changing around them. The story doesn’t have to be squeaky clean or whitewashed to be inspiring, but the “everyone has a traumatic ending of no hope, no pathos or no redemption” may play well on current crop of dramas which populate both HBO and Showtime, but it’s no guarantee of a sold-out run on Broadway. The show ended with an anti-climatic whimper, not the bourgeoning bag promised from the terrific first act. Solidly in this creative team’s corner, a fabulous and well-founded score that requires the remainder of the story to rise up to match both its life and compelling passion. 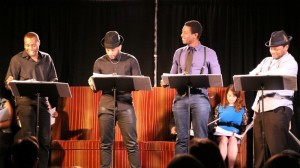 I remember first hearing a few selections from Central Avenue Breakdown at the FWD Theatre Project’s second season kick-off concert and I described it then as “set in jazz soaked 1940 Los Angeles, brother betrays brother for the love of a girl “ which “felt like a tremendous hybrid of Motown, Memphis and Smokey Joe’s Café.” Now that I have seen the completed reading, I wasn’t that far off.  Act one laid out an absorbing and layered complex story arc set to fabulous jazz influenced music. Act two needs finessed more to make this entire piece feel more commercially viable. This extraordinarily talented cast and powerful collection of musicians really did the current script justice. Gathering a pool of actors and singers who normally have Monday evenings off, as most of the Chicago run theaters are dark at the start of the week, once again proves to be one of the FWD crew’s core strengths. Central Avenue Breakdown couldn’t have asked for a more receptive and fervent audience. Now, if only these reading’s came with a digital download of the soundtrack?

G. H. HARDINGJanuary 21, 2021
Read More
Scroll for more
Tap
The Sound Of Music – The Hills Are Still Alive
Countdown To The Tony’s The Rehearsals