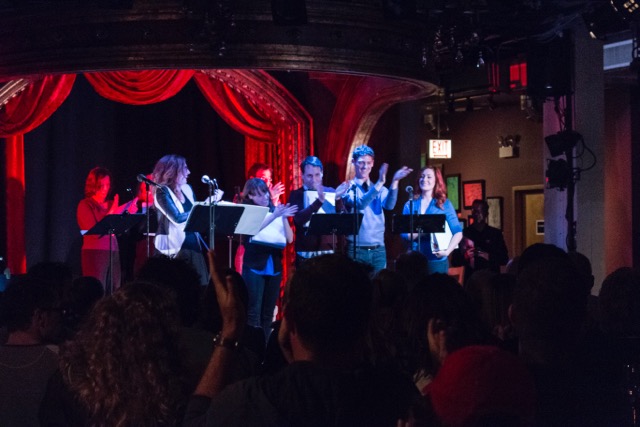 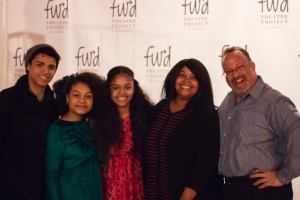 What an exuberant way to spend the extra day gifted to us by the fact this is a Leap Year. Monday, February 29th may have seen flurries falling from the sky, but it was certainly a hot time in the Uptown Underground. Specifically, it was the next lively reading sponsored by the team of the FWD Theatre Project. On the docket for the evening, a fresh musical comedy titled Neurosis A New Musical. The artistic mission of the FWD Theatre Project is to “create an environment that supports, nourishes and introduces new musical theater works to Chicago audiences.” This reading was staged at the Uptown Underground, a spot quickly becoming the go-to spot for new Cabaret acts in the Windy City. The FWD Team, including  Executive Director Kyle Dougan, Missy Greenberg, Karen Mutler, Steve Mutler and Dominic Rescigno had some “new” news themselves, including the reshuffling of a few key members. This night saw the debut of Michael Gillis as the New Artist Director as Founder Amber Mak has taken a new position as the Development Director of New Works at the Paramount Theatre in Aurora. Well deserved kudos for Mak, just coming off of her successful directorial debut of Hairspray at that same venue. She is segueing from the daily responsibilities of Artistic Director to Executive Board Member. She joked she will be “floating around” all of the season two readings, proving herself a golden girl good luck charm to all she encounters. Best wishes to Mak and I am most excited to see her continued creative vision solidified at the Paramount. Now, back to FWD business. 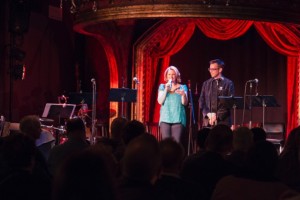 The second FWD Event in a month, Neurosis A New Musical, is a promising, contemporary musical. On hand for the evening, book writer Allan Rice, music crafter Ben Green and lyrics author Greg Edwards leading a cast of Chicago’s finest. Steven Stratford, recently featured in Hound of the Baskerville, headlined as Frank, a loveable loser, an assistant to a professional Magician, and an aspiring one himself, he works in a strip mall magic shop to pay the bills. His latest trick titled  “The Suspicious Mole,” oh Frank. Wade Elkins, of the very successful Blue Man Group, was cast as Neurosis, Frank’s imaginary, most insecure and self-doubting best friend. These two shared their powerful vocal chops and honed comedic skills, hamming it up in numbers titled “Who’s The Guy,” “You Got Neurosis,” and “Incredible Frank.” Balancing these two, career gal Abby (the always adorkable Landree Fleming, fresh of her hysterical run as Penny Pingleton in Paramount’s Hairspray) and Alex Palkovis as her imaginary bff, a female version of Neurosis. When Frank and Abby meet, it is awkward love at first sight. Trying to impress her with magic, Frank utters “For my first trick, I’d like you to lower your standards.” These two congenial geeks shine best during duets “Let’s Go” an ode to hooking up, “Oh, jokes at intimate moments” Frank declares and “Boyfriend/Girlfriend” with chirpy lyrics including “we don’t need separate checks.” Ah, young love at its finest. Adding a curve ball to the proceedings, Frank’s overly involved parents, played with comedic verve by Nancy Voigts & Dave Stinton. Wanting their son to give up magic and go to law school they sing, “We’ve invested in you, we want our return.” The act two stand out “Meet The Parents Tango” a complex, passive/aggressive duet between girlfriend and (maybe) mother-in-law for Frank’s attention and affection, simply soared. “You want a Jew, this is the cost” jibed Voigts. I am still laughing. 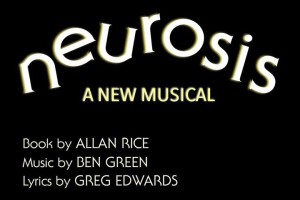 Rounding out the cast, the always engaging Hillary Marren, who played both the forthright psychiatrist and the play’s narrator. As this is a reading, this character needs work. As the doctor, she is a scene stealing sycophant, a role that suits the skill sets of Marren perfectly. Her take on “Real Deal Therapy” made me wish there was a competed cast soundtrack to take home at the show’s conclusion. Sadly, the hapless narrator needs to be written with either a sharper wit or to be removed completely. This is the glorious thing about readings. The material, like clay, is still being worked, massaged and molded if you will, before it becomes a competed piece of art. Smocks back on boys. Mary Jo Bolduc completed the cast playing an array of assorted female supporting characters to giggles from the audience. The final two songs “You Are My Neurosis” and “Rock Your Neurosis” are memorable toe tappers celebrating “own who you are” and “parade your quirks.”  Kinky Boots ended with songs of similar themes and we all know where Kinky Boots ended up. Just in case you don’t, Grammy and multiple Tony Award wins is to what I am referring. Directed by Jen Ellison, a Second City veteran, the laughs were on point. I do not think the creative team of Rice, Green and Edwards could have asked for a more capable cast for their reading. This is the plus with holding these events on a Monday night, the day of the week almost all the Chicago Theater’s are dark. For music, the talented Alex Newkirk again served as Music Director with Tony Sandora on percussion & Kurt Henning on the bass. Newkirk proving himself a fantastic go to & an emergent talent in the Chicago theatrical scene. 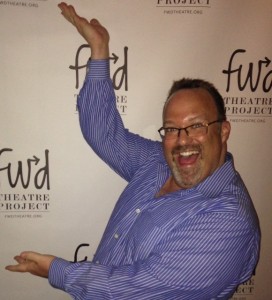 A comedy of a nice, yet meek, Jewish boy looking for love may not sound all that new. Just see Little Shop Of Horrors with a dash of The Producers peppered with Book Of Mormon, however Neurosis A New Musical is on its way to becoming a real charmer. The music felt fresh and the songs stayed in my mind long after the show concluded. A very good sign, indeed. These readings also provide a decent chance to bump into other gifted Chicago based talents, including Tony Award-nominee, Felicia P. Fields who was on hand, in the audience VIP section, as was Steppenwolf for Young Adults actors Ariana Burks and Jonathan Nieves, both currently starring in The Compass. Clearly, I made the rounds. A year and a half ago, FWD debuted on the scene as the hopeful “little engine that could.” Half way into season two, “could” continues to prove it “can.”