Game of Thrones Live Concert Experience: The Must-See Event in all of the 7 Kingdoms

Game of Thrones Live Concert Experience: The Must-See Event in all of the 7 Kingdoms

Do you rider under the banner of House Stark, rule with an iron fist as House Lancaster or ride amongst the dragons and House Taragen? If it sounds like I’m playing make believe and the only fantasy you dedicate yourself to this fall is football, then the Game of Thrones Live Concert Experience is not for you. You may be wondering what is exactly the Game of Thrones Live Concert Experience because I sure did. 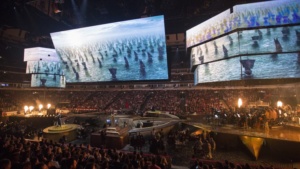 Picture thousands of passionate Game of Thrones fans packed into a hockey arena, filled to the rafters, as Ramin Djawadi leads a live orchestra set to a series of montages based on your favorite scenes and characters from the beloved HBO show projected on several large screens. Add a dash of pyro, aerial performances, a brilliant score, and white walkers and you’ll find a truly must-see experience for GOT fans. 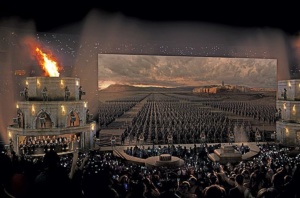 Before diving into a full review of the show, be warned that the show does show nearly complete scenes from all of the seasons, including all of season 7. With that said, I want to experience all of my favorite shows this way. 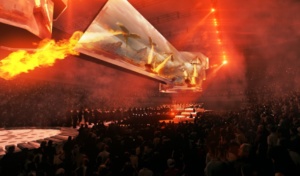 Starting off the show, a pre-recorded message from the sinister Cersei Lannister herself, Lena Heady, sets the mood, demanding everyone to silence their cell phones or “be boiled alive in the blood of their children.” Following her message, a familiar yet empowering melody rings out as the orchestra plays the theme along with ever-changing 7 kingdom’s map. Nowadays, one of the most recognizable TV show themes, there’s quite nothing like hearing every note ring out through an arena which bolsters fantastic acoustics for live orchestras.

After the theme, a series of well-edited, emotionally evoking montages are played, giving props to each of the many, and most likely at this point deceased, characters. So don’t picture a snooty orchestra event since composer/conductor extraordinaire Ramin Djawadi encourages audience participation in the form of cheering and booing for your favorite characters as they appear on screen. Support rang out as fans proclaimed their passion as Jon Snow, Tyrion, and all their favorites appeared on screen as videos, also reminding you of the vast wealth of characters in the GOT universe.

Following the hero shots, seasons and major storylines were accompanied by their original score causing every fan to relive some of their favorite and most gut-wrenching moments of the series. It’s one thing to re-watch the infamous “Red Wedding” scene on a large projector but to hear it’s mesmerizing score along with Djawadi explanation on how the music choice came to be is hauntingly beautiful. I was happy to see that the brutal scene was edited down for this format.  It was hard, even as two 30-year-old men, not to erupt in tears while reliving Hodor’s character arch.

Unlike the Harry Potter Live in Concert experiences where the orchestra plays the live score to the film in its entirety, Djawadi and his team were smart to sync the performance of the orchestra with video montages based on characters or full scenes rather than a single episode due to its original television format.

Though some of the video packages, especially the montages, were out of chronological order, the night felt like a fantastic recap of the show, getting you ready and pumped for the upcoming season. Sorry folks, Season 8 doesn’t premiere until April 2019.

Besides the video and musical element, there was a dazzling stage show element to the production. Fire exploded onto the stage anytime Daenerys and her dragons burned their victims alive. While playing, violinist Molly Rogers rose above the crowd, easily reaching the 300s level, as rose petals showered the audience, symbolism for the bloodshed happening in the scene. Djawadi himself performed on an organ-like instrument the eerie track “Light of the Seven” as the conflict between High Sparrow and Cersei came to ahead, seeing the stage light up in green flames and pyrotechnics reminiscent of the wildfire used in the climatic scene. Several other theatrical elements are used to bring the music to life in such a bombastic way.

Speaking of Ramin Djawadi playing live, this is overlooked reason on why you should attend an experience like this. Iron Man, Pacific Rim, Medal of Honor and Westworld are just a few of the many extraordinary scores that Djawadi has created. Unlike your favorite band that frequently tour goes on tour, it’s beyond rare to be able to see and experience well-known composers play their scores. Live musical experiences seem to be a trend in the “nerd” subculture with the heavy hitters like Star Wars, Harry Potter and now GOT getting into the mix, having access like this to a composer is unprecedented. As a concert enthusiast, I never thought I would have had the chance to see Djawadi shred on a guitar to his tracks.

Even though this is the second time that Game of Thrones Live Concert Experience has hit the road, don’t count on the tour making its rounds again. Djawadi discussed waiting in anticipation to see footage and start composing the score to the upcoming 8th season. It wouldn’t be a surprise if he hands are wrapped up in that and any other future movies that take him away from performing on the road, even when the show finishes up. This special event is a treat for Game of Thrones fans alike. While those that aren’t currently caught up will have huge plot points spoiled for them, those that haven’t missed an episode will relive this epic in a new format that is an exhilarating way to take in this beloved content. Winter is approaching, don’t miss the hottest ticket this fall season.