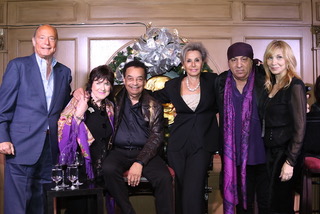 The hits of Gary U.S. Bonds were and still remain an irresistible invitation to an instant party!. On Monday night the Legendary Friars Club’s dining room turned into a huge party. Among the party goers were Rock N Roll royalty Steven Van Zant and his beautiful wife Maureen. On stage Gary was accompanied by guitarist Mark Leimbach and on vocals, “Big Mama” Laurie Anderson and daughter Laurie Anderson Tobias. Through out the evening his biographer Stephen Cooper guided Gary down memory lane.

As American’s baby boomers moved into their mid teens and real rock’n Roll was in  dwindling supply, Gary came roaring out of Norfolk, Virginia  in 1960 with the relentless pounder “New Orleans”. Attention was brought to the record by having promotional copies sent to a radio stations in sleeves inscribed “Buy U.S. Bonds”-hence at age 19, Gary Anderson became Gary U.S. Bonds.

The follow-up was the now legendary “party” record, “Quarter to Three,” a number one hit with a spirit and energy that would eventually inspire and  influence a generation.

A rare distinction for Gary is that he managed to transcend the decades  with hits. His inspiration for Bruce Springsteen and Steven Van Zandt, who had grown up on Bond’s music led to a chance meeting in  1980.

A friendship developed and, shortly after, a musical collaboration which resulted in Bonds’”Dedication” and “On the Line” LPs, with singles: “This Little Girl is Mine,” Out of Work,” “Jole Blon” and “Dady’s Come Home”.
The Friars Club’s members and guests were treated to a rare and special evening produced by Jane Shevell and Magda Katz.

The  producing team have brought excitement back to the iconic club with some of their previous productions including a night with Rock N Roll icon Tommy James, lunch with  “Sex in The City” author Candice Bushnell, and Hollywood’s Carol Baker.

Suzanna BowlingJanuary 30, 2023
Read More
Scroll for more
Tap
Broadway For All Cabaret at the Circus
Singer-Songwriter Rebecca Hart & The Wrong Band Do The Right Thing This Season At Rockwood