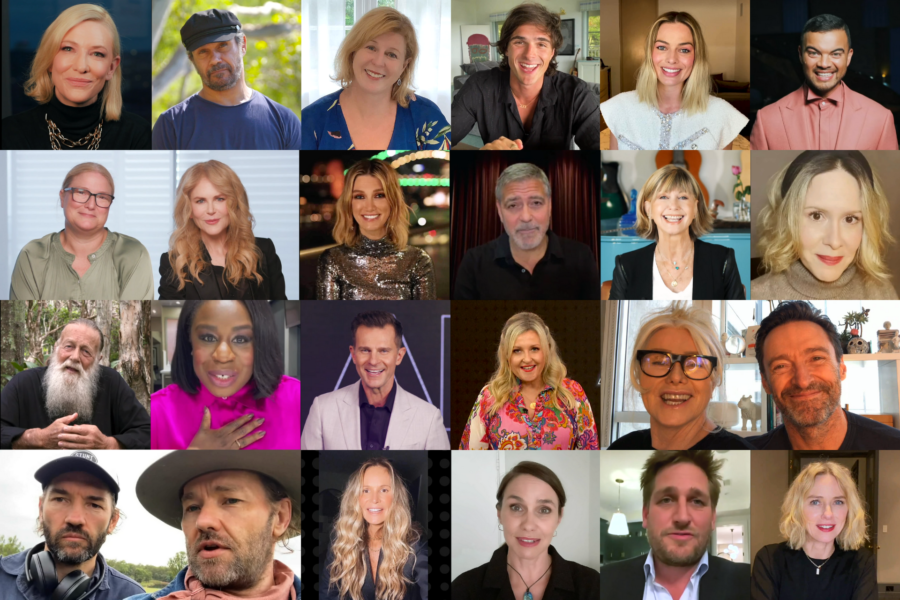 This year G’DAY USA and the American Australian Association partnered for the first time for a virtual gala to celebrate and recognize the diverse contributions made by Australians in the cultural and creative sectors and to raise money for young emerging artists through the AAA Arts Fund.

Television presenter Angela Bishop kicked off the pre-show on the virtual red carpet by asking past guests and honorees, such as Nicole Kidman, Margot Robbie, Naomi Watts, Jacob Elordi, Elle Macpherson, and Olivia Newton-John, to name a few, to share their favorite memories from past galas, what was special in their heart about the event, and why the AAA Arts scholarships are so important.

Top-tier musical artists Chris Sebastian, Dami Im and Johnny Manuel then lent their vocals to William Barton playing the didgeridoo for a never heard before arrangement of That’s What Friends Are For. A series of scenic landscape images from Sydney, New York, to Los Angeles combined with images of friends and family gathering together provided a sense of unity and hope needed especially during this challenging time.

David Campbell hosted the event. A live-cross to The Hon. Arthur Sinodinos AO, Australia’s Ambassador to the U.S. in Washington, D.C., focused on what Australia can do to further strengthen and continue the longstanding relationship with the United States. The Arts were mentioned as being an integral part of the relationship, especially with more Hollywood films being shot in Australia benefiting both economies.

Nicole Kidman and Bruna Papandrea presented author Liane Moriarty with the Excellence in Literature award, with their respect and admiration for their friend made abundantly clear. Moriarty, best known for her New York Time’s Best-Selling novel, Big Little Lies, which was also turned into a series on HBO, humbly accepted the award and shared her fondness for the HBO adaptation bringing Australian and American talent together on set.

Tasma Walton and Jack Thompson presented actor Aaron Pedersen with the Excellence in Television award. Pedersen, who is the star of the Australian police drama Mystery Road, is the first Indigenous Australian to be recognized for this award. He gave a heartfelt speech and accepted the award on behalf of his brother, Vinnie Pedersen, who he quoted as the inspiration in his life.

As the show continued Hugh Jackman and Deborra-Lee Furness introduced some of the creatives that make up the AAA Arts Scholars & Alumni including artist, Nicholas Smith, who designed and hand crafted the honoree awards. Special note was made of the Scholar House Band, made up of musicians who have benefit from the support of the AAA Arts Fund, performing the musical underscore composed by another talented AAA Arts Fund Alumni, Nicholas Marks.

George Clooney gave a charming ode to Cate Blanchett. Sarah Paulson, and Uzo Aduba spoke of Cate’s ability to make magic happen on set before presenting her with the Lifetime Achievement Award. Blanchett thanked past trailblazers, such as Jill Armstrong, George Miller, and Rachel Perkins, to name a few for paving the way for her and for those who continue to bring work back to Australia.

“Australia is such an extraordinary country with a plethora of talent both in front and behind the camera and I do hope that as the cultural connection between Australia and America enters yet another exciting chapter, we do find genuine and concrete ways to honor and value the contribution of crews and creatives and casts on the ground in Australia,” stated Blanchett. “My career would not be anything without the extraordinary connection between these two countries, so thank you.”

Additional musical acts for the evening included: Guy Sebastian, who gave an emotional performance singing Standing With You backed by a choir and string quartet; Delta Goodrem, who sang her song Solid Gold overlooking Sydney Harbor, and Colin Hay who was joined by the rest of the cast and members of the public for a stripped back version of Down Under to close out the evening.