Get Happy with Angela Ingersoll in Come Rain or Come Shine

Get Happy with Angela Ingersoll in Come Rain or Come Shine

Every theater goer should be so lucky, just once in their life, to see an amazing artist give a performance that is unforgettable. Thanks to Music Theater Works (formerly Light Opera Works), Chicago area audiences will get that chance, if they hurry to see Angela Ingersoll in her rafter shaking, uncanny tribute to the talent and spirit of Judy Garland called Come Rain or Come Shine, playing now through October 14 At the Nichols Concert Hall in suburban Evanston, Illinois. 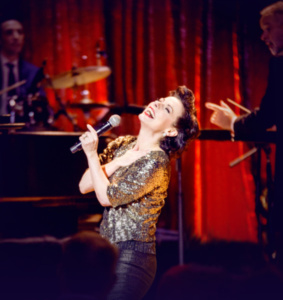 You really shouldn’t attempt to recreate the performance of one of the greatest singing talents of all time unless you’ve got pretty extraordinary performing chops yourself.   That caveat should definitely go for people doing tribute shows about Judy Garland. I was lucky enough as a college student in 1974 to see the amazing Jim Bailey do his tribute show to Judy in Vegas. As remarkable as he was, however, he was more Judy in manner than in voice. There’s one Judy tribute performer, Tommy Femia, who has performed as Judy in NYC for years, who sounds to me just like Judy might have sounded, but only if Judy had a really, really bad cold.  Mr. Femia’s tribute is a fine comedy act, which can be enjoyed on that level, but not musically, at least by me. 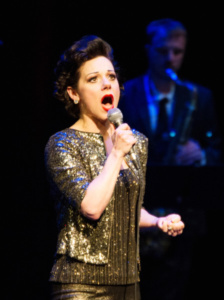 Thank heaven, Ms. Ingersoll is a thoroughbred racehorse of a different color. She’s got it all.  She has a voice as truly beautiful as Judy’s, with equally big pipes.  She is a great actress who is as passionate, sensitive and heart wrenching as Judy was.  Best of all, she’s a real woman, who can honestly bring Judy back for us. She tells us that she has been noted all her life for her resemblance to Judy in features, stature, and even, as she wryly points out, their similarly crooked teeth.  She relates how her beloved uncle coached her as a budding performer in Judy’s style when she was very young.  She’s been singing these songs in Judy’s style all her life. If anyone was ever meant to reincarnate Judy in performance, it’s undeniably her. 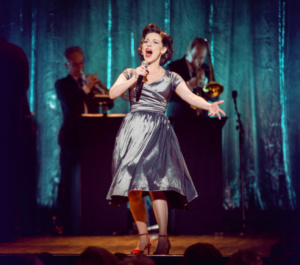 But it was only 3 years ago, when she sang I’ve Got the Right to Sing the Blues in a televised program called the Artist’s Lounge which she produces with her husband and fellow performing talent, Michael Ingersoll, that representatives from Porchlight Music Theater in Chicago saw her, and invited her to star in their production of End of the Rainbow, a play with music about the end of Judy’s life. The indelible performance I’m talking about was really that one, even more that her current tribute show performance. In that production, Ms. Ingersoll tore our hearts out with her spot-on recreation of both Judy’s vocal talent and her personal disintegration. That production has led to her star in three other productions of End of the Rainbow around the country since then, with more to come I’m sure. 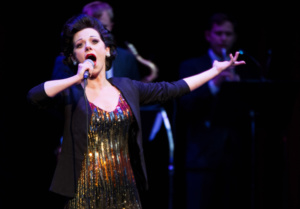 Most of this set of Judy favorites is as exuberant, upbeat and energetic as Ms. Ingersoll herself, whether cheering us on with “Get Happy” from Summer Stock, or belting out “Swanee”, Ms. Garland’s tribute to her own favorite singer, Al Jolson. My favorite moments, however, were the quiet ones, when Ms. Ingersoll would sing only with her pianist and musical director, the capable Jeremy Kahn. I loved the wistfulness of her rendition of Noel Coward’s “If Love Were All”, and the need to find love after five marriages expressed by her delivery of “Make Someone Happy.” Wishing that Mickey Rooney would have thought of her as more than a sister set up a beautiful version of “But Not For Me”.  Above all, it was the world weary Judy singing “Over the Rainbow,” whose poignancy was unforgettable.  The closer we get to Ms. Ingersoll as Judy, the more we love her, and cherish the memory of Judy she evokes in us.

In End of the Rainbow, Ms. Ingersoll was tasked with being a Judy impersonator, which she did brilliantly. But as Ms. Ingersoll tells us when she is introduced as herself at the top of Come Rain or Come Shine, she isn’t really impersonating Judy this time. What she does, in a most wonderful way, is channel the essence of Judy at her best through her own formidable talent. When she relates stories of Judy’s life in show business between the songs, it’s Ms. Ingersol speaking to us, although certain of Judy’s signature mannerisms and speech pattern are now inseparably blended into hers. When she sings is when she gives us more of Judy than Angela. But it’s still filtered through her own bold, brash style.   At times, some notes seem a bit too big or are held too long, because she does indulge occasionally in a little vocal grandstanding. As good as she is, however, she earns the right to blow her horn as long and loudly as she chooses.

Better attention could have been paid to the sound mixing on opening night.  Ms. Ingersoll was working pretty hard at times to get in front of the sound of her on stage band on the loud numbers. I also was unhappily distracted by the frequently choppy performance of her trumpet player. But nothing could detract from her talent.

Ms. Ingersoll gives us Judy as she might have been at the height of her power as a performer, if she hadn’t been defeated by addictions to drugs, alcohol, and overwork, all of which killed her at age 47.  Ms. Ingersoll gives us a new and improved “Judy 2.0”.  This wonderful tribute was taped for PBS, and has recently earned Ms. Ingersoll an Emmy nomination.  So lucky viewers will get to see this show in their own homes.  But there’s nothing like being there in person.  For fans of Judy who want to be able to remember her at her best, there’s no better way to experience that than to see her through Ms. Ingersoll’s eyes.   So forget your troubles, c’mon, and get happy with Come Rain or Come Shine.