Get Lucky at the Chicago Musical Theater Festival 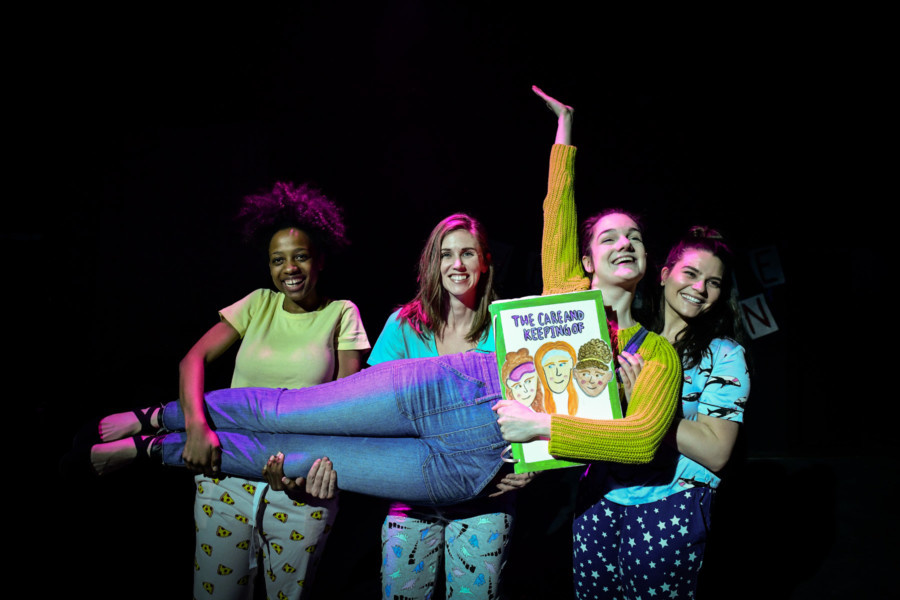 Get Lucky at the Chicago Musical Theater Festival

The new musical, Lucky, now playing at the Chicago Musical Theater Festival, hopes to get lucky with its audience, by appealing to the young women who grew up reading the sage advice about puberty offered in the book, “The Care and Keeping of You: The Body Book for Younger Girls” by Valorie Schaefer and Josee Masse.

The authors of this musical, Sarah Frasco (book and lyrics) and Gabriella Hirsch (music and lyrics) say that their show is merely “inspired” by that book. Indeed, Luckyis not a musicalization of it.  Rather, it is the original story of a freshman girl at Ohio State, Lucky (the touching and delightful Madeline Lauzon), who arrives at school with that book in hand, claiming it has guided her all her life. Why she still needs to cling to it at age eighteen, and why she seems not to have learned its most important lessons during high school, are not made clear.

The book also comes with three female muses (Ricci Prioletti, Allison Taylor and Shelby Edwards) who share its insights with Lucky from time to time. But those insights are few and far between in this show.  In fact, the most glaring problem with Luckyis that it consistently squanders the opportunity to let those Muses interact with Lucky and try to guide her. Instead, they often stand around on stage as extra chorus members, dance around pointlessly or, more inexplicably, repeatedly embody the chiming of the campus clock in the yard.

As a guy, I had no occasion to read this book.  From the tidbits given in the show, I gathered that it tells budding pubescent girls, among other things, that they really have three labia (who knew?), and that breasts come in all different shapes and sizes.  The latter seemed like really great song opportunity, which the writers sadly failed to exploit.

The book also presumably gives sage advice to pubescent girls about valuing yourself, establishing boundaries, and respecting your newly adult body.  These ideas should have governed Lucky’s choices from the beginning, but do not really shape her behavior until the very end.

On the first day of college, Lucky meets her roommate, Hazel (a sincere Britney Brown), who says, “It’s not like high school.”  I guess that depends on how you see it.  In this vision of college, the kids are cruel slackers who tease innocents relentlessly, call people names who are different, and think only about sex and partying.  They hate studying and fear testing.  That sounds like high school to me!   If that’s what college is like at Ohio State, I’m glad I went to Northwestern.   But it also means that this show has a very juvenile slant.

When the cruel kids around Lucky discover that she still has this book, they all mockingly call her “Puberty Girl,” a name which also gets her unwanted fame on the internet.  The four one dimensional, loser guys (Shanna Sweeney, George Ochoa, Brendan Tran and Gary Fields) from the zoologically oriented fraternity, Theta Alla Gata (sound it out), harass Lucky mercilessly, throwing tampons at her and sticking sanitary pads on her backpack. She is equally abused in their own way at first by the “cool” girls, Brittany (Gabriella Hirsh)  and Tiffany (Sarah Frasco), from the oversexed sorority, Tri Gappa Thi(gh).   Also abusive is overly zealous religious freak Dinah (Katie Hunter).

Being “Puberty Girl” becomes code in Lucky’s mind for being foolishly goody-goody and still virginal.  So, with a nod to Sandra Dee and a nearly plagiaristic homage to Grease, she changes her image to black leather and cigarettes, trying to fit in with her hard-partying classmates.  She doesn’t deliberately seek to lose her virginity however, and even resists it.  That needs explanation by more interaction with the Body Book.

In the end (spoiler alert!), Lucky is saved from potential decadence by another heretofor silent roommate, Piper (Elisabeth Del Toro), who reveals herself to really be Lucky’s “Pussy Godmother.”  It is she, not the Muses, who teaches Lucky to respect and stand up for herself against male pressure to put out.  Once again, the authors fail to use the Muses, who represent the book that supposedly was Lucky’s philosophical touchstone, in a critical moment.

There are some sweet, PG bits in the show.  The “meet cute” between Lucky and Hazel is a charming song called “Friendship Crush,” in which they bond over their love of acapella bands, and dream of spending their lives together.

My favorite number, even if I am a guy, was “The Bikini Tango”, in which Brittany and Tiffany take Lucky and Piper for their first bikini wax.  It was delightfully painful for everyone.

As the show wore on, however, it got coarser and more explicit.  The second act opens with a number in which apparently the entire Ohio State freshman class sings “Fuck Me to Hell,” when they realize that school requires studying.  At the drunken frat party “In a Dirty Basement,” the boys and girls both sing of their desire to fuck random strangers on a hard table, just because. The girls also sing about the joys of having cum in their hair.  That was funny in Something About Marybecause she used it unknowingly as hair gel.  Here, it just seems rather gross.  But Ms. Hirsch’s frequently infectious music and the cleverness of their combined lyric writing somehow makes it all work in context.

So this brings up the key question:  Who is the audience for this show?  College kids won’t care about a show that markets itself as inspired by a book aimed at thirteen year olds.  Parents of actual tween girls will drag them from the theater by their ears.   The target audience for this show would appear to be slightly drunk twenty-somethings who went to party schools, for whom this feels like homecoming week.  But reaching them en massewill require a commercial production, and I don’t know that this show will ever get that.   At best, it struck me like an overly long SNL skit with music.

Maybe if the show is reset in high school… … if the Muses speak to Lucky more frequently and more directly… if the characters are made more realistic… and if the language is cleaned up a bit, this show could be made appropriate for the  younger audiences who will have recently read the Body Book.

But being neither fish nor foul, as it is now, Lucky’s only other audience is at a festival like this, where it’s a fun enough evening for an audience made up largely of those twenty-somethings I was talking about before.   If you’re older than that, have a couple beers to loosen up first, and come enjoy it now…because you may not see it elsewhere.

The Chicago Musical Theater Festival continues through February 24 at the Edge Theater.

Related ItemsChicago Musical Theatre FestivalGet LuckyJeffery Lyle SegalNewThe Care and Keeping of You: The Body Book for Younger Girls
Out of Town