Get On Your Feet! Cause the Rhythm is Gonna Get You

Get On Your Feet! Cause the Rhythm is Gonna Get You

It doesn’t matter what the critics say, On Your Feet! will be a popular success, much along the lines of Mama Mia or Beautiful the Carol King Musical. Just remember the critics didn’t like Wicked. If you are a fan of Gloria Estefan’s music and know her story, then no matter what, you will leave the theatre satisfied. This music is infectious and her story inspiring. Is the book by Alexander Dinelaris (Oscar winner for “Birdman”) well written….no. Director Jerry Mitchell does manage to capture the emotional impact though it takes until the second act to get there. Sergio Trujillo’s chorography captures the time.

What the show has going for it is the music and a star in newcomer Ana Villafane. This young multi-talented girl is exquisite in the role making her fleshed out and layered. This show also has a message of hope, inspiration and going for your dream, no matter the setbacks.

In a series of flashback we see a young Gloria in Florida growing up singing. Her grandmother Consuelo (the marvelous and warm Alma Cuervo) pushes her towards her destiny when the dashing Emilio Estefan (the very into himself Josh Segarra) comes by her door. After auditioning for him with “Anything for You,” she becomes the lead singer in the Miami Latin Boys re-named the Miami Sound Machine. Emilio is the perfect partner for the young Gloria as he takes on the music industry to become mainstream. He was so successful in business and breaking the barriers that Gloria Estefan paved the way for JLo, Ricky Martin and others. “Conga,” is the cross-over song making Gloria a world wide star. 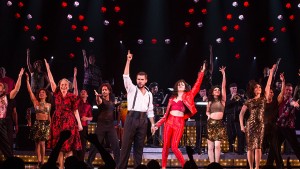 In the second act her tragic accident, marital strife and conflict between her mother (the fabulous Andrea Burns) make for a better story-line though all are skimmed over and not really fleshed out.

The score will infect every fiber of your being. You will google Ms. Estefan’s American Music Awards comeback and realize you just saw a perfect replica. The flashback with Andrea Burns singing in Havana “Mi Tierra” knowing she must flee her homeland is chilling. Ms. Villafane is a joy to watch. She connects with the audience, she connects with her fellow actors and she channels the iconic singer making us root for her life story.

You will leave On Your Feet! feeling better about your day, humming the music and satisfied. What more can you ask?