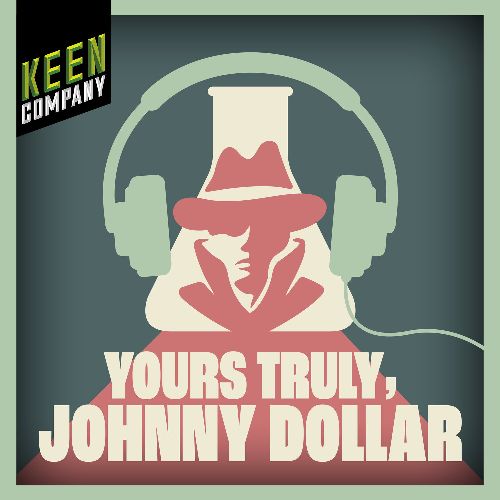 “I am thrilled to announce Keen’s final piece of programming for our 21st Season! Throughout the past year, we have been revisiting some of the most iconic titles from the Golden Age of Radio through starry benefit broadcasts. For our last fundraising event of the series, we are thrilled to present one of the most successful serial mystery programs, Yours Truly, Johnny Dollar, starring Santino Fontana as the titular insurance adjuster with the action packed expense account. It’s been an utter pleasure and honor to delve into the fascinating history of radio drama while working alongside some of the best talents in the theatre. I look forward to sharing the work with our community as we raise funds to ensure we return to live performances strong,” said Mr. Silverstein.

Johnny Dollar, “the freelance investigator with the action-packed expense account,” worked for the Universal Adjustment Bureau, flying from Mexico to swamps to California ghost towns. He would recover furs and diamonds for a cut of the goods, bodyguard wealthy men, and climb into the deathly Skull Canyon. All stories included mystery and murder, drawing listeners to the edge of their seats.

Tune in to the intriguing case of “The Clever Chemist Matter,” which originally aired on March 17, 1957, America’s fabulous freelance insurance investigator. A simple change to an insurance policy leads to disastrous results when a scientific genius is killed, his partner is blinded, and the laboratory door is found bolted from the outside. This sounds like a case for the man with the action-packed expense account, Johnny Dollar.

Yours Truly, Johnny Dollar is a pay-what-you-can benefit event with tickets starting at just $1, including a live video talkback immediately following the premiere on Thursday June 10th.

Just like the original broadcast, this will be an audio-only performance. Patrons can expect an intimate, engrossing, fully-produced audio-only production that will feel just as satisfying as a great night at the theater!

This fundraiser event will support Keen Company’s Hear/Now season of audio theater, as well as Keen’s Playwrights Lab for mid-career writers, and Keen Teens which serves students in all five boroughs of NYC.

Yours Truly, Johnny Dollar is part of a series of all-star benefit broadcasts, including Howard Koch’s legendary adaptation of War of the Worlds which aired in October 2020 starring Jason Tam; Keen Company’s Holiday Variety Hour which aired in December 2020 featuring Keen alumni; Sorry, Wrong Number by Lucille Fletcher which aired in February 2021 and starred Marsha Mason; and The Year of Magical Thinking with aired in March 2021 and starred Kathleen Chalfant.

Keen Company is an award-winning Off-Broadway theater creating story-driven work that provokes identification, reflection, and emotional connection. In intimate productions of plays and musicals, the company tells stories about the decisive moments that change us. Keen also runs a developmental new work initiative for mid-career playwrights and a unique educational outreach program for teens in all five boroughs of NYC.

All audio plays are available now completely free for patrons on Keen Company’s website as well as through popular podcast platforms.

For more information on Yours Truly, Johnny Dollar or any of Keen’s programs, visit KeenCompany.org.