The set looks like a neon multi-colored version of the game mousetrap, combined with a mushroom-induced version of an oceanic Alice in Wonderland. The costumes are straight out of the most creative, gaudy imagination imaginable. Everything, plus the kitchen sink, has been thrown on stage by the fabulous David Zinn. Chalk up Tony #1. 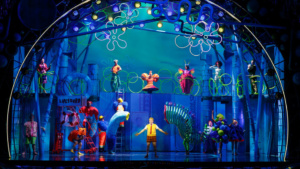 SpongeBob SquarePants The Broadway Musical is wildly inventive, creatively insane, visually eye-popping, and one of the most entertaining original new musicals to hit Broadway in a long time. Conceived and directed by Tina Landau, this show is so stupid, it actually works. Chalk up Tony #2. 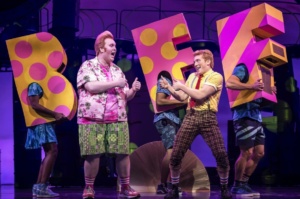 If you have not watched the immensely popular cartoon of the same name, you may not know SpongeBob lives in a pineapple under the sea, but by the time the show is finished, Ethan Slater – the agile young man who plays the title character – will have you knowing that like Ben Platt last year, this is a star winning performance. Chalk up Tony #3. Slater is remarkable with his signature arms swaying, high-flying leaps, vocals, and athletic gymnastics that even without a sponge costume he makes this part squarely his own. Like Platt, this is Slater’s Broadway debut.

It is an ordinary Bikini Bottom day in this colorful enchanting world. SpongeBob, who loves working at Mr. Krabs’ (Brian Ray Norris), wants to be the manager and can’t understand why nobody sees him as anything but just a sponge. Suddenly, life as he knows it turns apocalyptic when a volcano threatens to destroy the town. The evil Plankton (the hilarious Wesley Taylor) and his sidekick, Karen the computer (Stephanie Hsu), see this disaster as a way to put Mr. Krabs out of business. However, SpongeBob, his best friend Patrick (Danny Skinner) – a dim-witted starfish – and Sandy (Lilli Cooper) – a scientific, karate-chopping squirrel from Texas – step in to save the day, despite friendships being tested, citizens who see this as a way to exploit the disaster for easy cash, as well as, governmental and media manipulation. Mount Humongous, the volcano that is about to erupt, is created by using an intricate series of intertwining ladders and cardboard boxes. The multi-story set is enhanced by remarkable projection design from Peter Nigrini and lighting by Kevin Adams. Chalk up Tony #4 and 5. In the end, this crazy musical has a moralistic humanitarian message hidden amongst this ingenious, wacky production.

My favorite moments include when the sardines form a religious cult to worship Patrick. “Super Sea Star Savior,” a rousing gospel number by Yolanda Adams, is an homage to “Our Favorite Son” from Will Rodgers Follies. 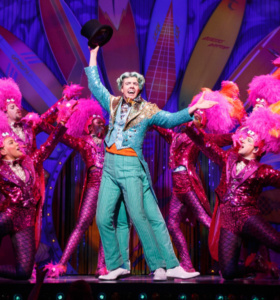 Squidward Q. Tentacles (Gavin Lee), SpongeBob’s next-door neighbor and co-worker at the Krusty Krab, dreams of playing his clarinet and performing on a large stage. “I’m Not a Loser” by They Might Be Giants brings this four-legged octopus tapping up a storm with the sea urchins sparkling and kicking up a sea full of bubbles. Chalk up Tony #6 for this show-stopping number and Mr. Lee. Christopher Gattelli has done some of his best work here. His choreography is an homage to Tommy Tune, Busby Berkeley, Kenny Ortega, Michael Bennett and Gower Champion. Chalk up Tony #7. 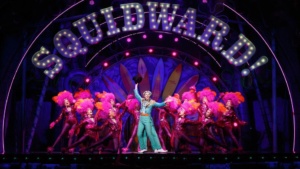 The cast is all spectacular. Other standouts include Gaelen Gilliland as The Mayor, Kelvin Moon Loh as the paranoid reporter, Perch Perkins, and eighteen-year-old Jai’Len Christie Li Josey as Krab’s daughter, Pearl, who gives a whaling vocal performance. Altogether there are ten Broadway debuts, which goes to tell you, if you want a powerful, uber-talented cast, go out of the box.

The quirky book written by Kyle Jarrow is a kick and has more to say than you think.

The music list is impressive with The Flaming Lips, Cyndi Lauper, Steven Tyler, David Bowie, Panic! at the Disco, Brian Eno, Plain White T’s, Lady Antebellum, Sara Bareilles, John Legend and more. I can see Cyndi Lauper’s “Hero Is My Middle Name”, Plain White T’s “BFF”, and John Legend’s “(I Guess I) Miss You” standing on their own in cabaret’s, auditions, and possibly outside the theatre world. Tom Kitt adds additional music and orchestrations. Chalk up Tony #8. Walter Trarbach’s sound design is without a doubt the best I have ever heard. Each character has their own sound and it is truly remarkable. Chalk up Tony #9.

SpongeBob SquarePants the Broadway Musical is just the show we need in this season where most of the shows on and off Broadway have just been mediocre. If there ever was a time we needed entertainment and a world that makes us step outside our own it’s now. SpongeBob SquarePants has you leaving the theatre with a smile on your face and knowing you got your money’s worth. I expect this show, like The Producers, to take home many statuettes.

The SpongeBob SquarePants the Broadway Musical: The Palace Theater

Suzanna BowlingJune 21, 2022
Read More
Scroll for more
Tap
He Says: Once On This Island Hope and Love Branch Out Far and Beyond
He Says: The Parisian Woman: A Modern Dangerous Liaisons – D.C. Style.