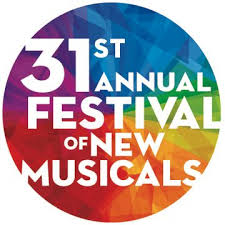 National Alliance for Musical Theatre (Betsy King Militello, Executive Director) is thrilled to announce this year’s directors and musical directors for their  31st Annual Festival Of New Musicals, which takes place on Thursday, October 24 and Friday, October 25, 2019 at New World Stages (340 West 50th Street, between 8th and 9th Avenues). The Festival events will kick off on Wednesday, October 23, with the return of The 46th Minute Concert at The Green Room 42.

Festival registration for industry members is free and now open at www.namt.org/festival. The public can also receive passes to the Festival through a donation to NAMT. There is also a day-of standby line for the general public for free admission (based on availability). Tickets are available for The 46th Minute at www.namt.org/events/the-46th-minute-2019.

The Festival has introduced musical theatre producers to 260 musicals and 491 writers from around the world. As a direct result of the Festival Of New Musicals, more than 85% of the musicals presented have gone on to subsequent readings, workshops, productions, tours, been licensed, and/or recorded on cast albums. Some past Festival shows include The Ballad of Klook and Vinette, Benny & Joon, Come From Away, Darling Grenadine, The Drowsy Chaperone, Gun & Powder, It Shoulda Been You, Lempicka, Ordinary Days, Striking 12 and Thoroughly Modern Millie, among many others.

Now in its 31st year, the National Alliance for Musical Theatre’s Festival Of New Musicals attracts theatre producers from around the world for this industry-only event to discover eight new musicals presented in 45-minute concert presentations over two days. All production costs are underwritten by NAMT, at no cost to the writing teams. As a non-profit organization, NAMT funds the Festival entirely through donations, sponsorships and contributions.

This year, a committee of 17 theatre professionals selected eight new musicals out of 219 blind submissions. The musicals they chose for the 31st Annual Festival are:

A true, New York story of how one man changed the lives of those around him, without ever speaking a word. Using just his notepad, pen and open heart, Ben turned a neighborhood of strangers into a community of friends, before finally encountering a miracle of his own.

Claire McKenzie, composer, and Scott Gilmour, book writer/lyricist, make up the writing partnership Noisemaker. Both graduates of the Royal Conservatoire of Scotland, they have worked throughout the UK and internationally creating innovative, original work to challenge the expectations of musical theatre. In 2016 Noisemaker was chosen as New Voices by Walt Disney Imagineering and NMI Inc. and, most recently, won the award for Unique Business of the Year at the 2018 Scottish Business Awards.

Interstate is an Asian-American road trip musical about Dash, a transgender spoken word performer who embarks on his first national tour with his best friend Adrian, a lesbian singer-songwriter. Their political and personal music inspires Henry, a trans teenage blogger living in a small town in Kentucky, to make a series of life-changing decisions. A parallel story about two trans people at different stages of their lives, the musical explores love, family and masculinity in the age of social media.

Kit Yan is a Yellow American New York-based artist, born in Enping, China, and raised in the Kingdom of Hawaii. Kit is a 2019 Dramatists Guild Foundation Fellow, 2019 Lincoln Center Theater Writer-in-Residence, a 2019 MacDowell Colony Fellow, 2019-2020 Musical Theatre Factory Maker, and a 2019-2020 Playwright’s Center Many Voices Fellow. Works include Interstate, which won Outstanding Lyrics at the 2018 New York Musical Festival, and Queer Heartache, which won five awards at the Chicago and SF Fringe Festivals. Their work has been produced by the American Repertory Theater, the Smithsonian, Musical Theatre Factory, the New York Musical Festival and Diversionary Theatre. They have been a resident with the Civilians, Mitten Lab, 5th Avenue Theatre and Village Theatre.

Welcome to the little Southern town of Good, Alabama. It’s wild, woodsy, down-home…and very, very haunted. One hundred years ago, a love triangle ended in an act of racist violence that seems to repeat in every generation—until now. This dark and lyrical tale pits good old-fashioned American denial against the redemptive power of facing your truth.

Jacinth Greywoode is a Brooklyn-based composer of classical and theater music whose work has been performed throughout the Americas and in Europe and Africa by such groups as the Calidore String Quartet, So Percussion and The Civilians. Jacinth has also performed as singer and pianist at such venues as the Apollo Theater, Stern Auditorium at Carnegie Hall, the Lincoln Center and the Greene Space at WNYC. Recent writing credits include Iron John (2019 O’Neill NMTC semifinalist; staged workshop at NYU); G’day, Ivan!; Master (American Opera Projects); and White Raven, Black Dove (commissioned by Cerise Jacobs/White Snake Projects, Boston 2022). www.jacinthgreywoode.com

March 1899 – French artist, Henri de Toulouse Lautrec, passes out in a gutter and is kidnapped. He awakes in the Chateau St. James, an asylum. Triggered by his imagination and a need to understand his downfall, the St. James continuously transforms around Lautrec into an intoxicating and provocative world—one that inspires yet may destroy him.

When Naomi becomes a finalist for the first one-way mission to Mars, she must choose: pursue her ambition or stay on Earth with the woman she loves. With a soaring, contemporary score, One Way is a moving portrait of how our choices affect those closest to us.

Christopher Staskel is a writer and musical theatre lyricist-librettist. Recent projects include  One Way (Johnny Mercer Writers Colony at Goodspeed Musicals; Rhinebeck Writers Retreat) with Ben Bonnema and The Firebird (2014 NMTC/O’Neill finalist) with Lisa Whitson Burns. He was a 2015 Kleban Prize finalist and a winner (with Max Mamon) of New York City Center’s Sondheim Remix contest, which granted him the surreal opportunity to rap for Stephen Sondheim. He holds a BFA in Music Theatre from Elon University and an MFA in Musical Theatre Writing from NYU Tisch. www.christopherstaskel.com

SeaWife is a haunted tale of the high seas. Both historical and pointedly modern, the sumptuous and energetic music of The Lobbyists guides us through Seth Moore’s world of whale hunts, ghosts and adventure to ask: “Can humanity save itself from its own devouring?”

Seth Moore is a polyartist who works in theater, film, visual art and music. His play Jonesin’ was produced by The University of Michigan; it won the 2008 McIntyre Prize, the Naomi Saferstein Literary Award and The Avery Hopwood Award for Drama. In 2009, his play The Man With America Skin also received the McIntyre Prize and The Hopwood Award and was produced for The Araca Project in 2012. Other Writing: Ghosts in the Tapestry (The Claque); Catch (Cincinnati Fringe); Wolf Inside (WNYC). He makes films with his company, Sheep Eats Wolf, and is a frequently commissioned muralist and Illustrator.

Liz Carlson is a director and producer of new work. She is currently in her fourth season as the Artistic Producer for New York Stage and Film. Prior to NYSAF, Liz worked as a freelance director and served as the Artistic Director of Naked Angels. She has directed at Ars Nova, The Dramatists Guild, EST, The Flea, Keen Company, Manhattan School of Music, MTC, The New Group, Playwrights Horizons, The Playwrights Realm, Signature Theatre Company, Studio 42, Williamstown Theatre Festival and more. MFA, The New School for the Performing Arts. Alumna of the Drama League Directors Project.

The Lobbyists (Tommy Crawford, Eloise Eonnet, Alex Grubbs, Will Turner, Tony Aidan Vo and Douglas Waterbury-Tieman) are an NYC-based band and theater company that creates and performs original music and innovative music-theater. The group takes its name from the lobby of The Flea Theater, where the founding members met in 2012 while working on the Drama Desk-nominated These Seven Sicknesses. Since then, the group has played many iconic venues in New York, such as Joe’s Pub, Rockwood Music Hall and Mercury Lounge, and toured to various locations in the northeast. As a theatrical and songwriting collective, the group’s work has been developed with NY Stage & Film, Cape Cod Theatre Project, Ars Nova, Rhinebeck Writers Retreat, Playwrights Realm and Musical Theatre Factory. The group’s debut theatrical piece, SeaWife, was nominated for a Drama Desk Award for Outstanding Music and Outstanding Lighting in a Musical in 2016. New and upcoming projects include The Golden Spike with Don Nguyen. Stay in touch and learn more at www.wearethelobbyists.com and @thelobbyistsnyc.

In life, we face many seemingly unanswerable questions. Why are we here? How does WIFI work? Why has there never been a stoner bromance rock musical about the impending student loan crisis and ever-growing income inequality gap? Well, ask no more. Behold: Simon & Jorge Pay Their Student Loans.

Jesse Gage is an NYC-based musical theatre writer and veteran of the Bleeker Street music scene, often found wheeling his upright piano around the West Village. His television credits include Fox, NBC, BBC, PBS and a bevy of Brazilian soap operas. After writing the cult hit Oklahomo: Enforcer of Justice (NYMF 2010), he was awarded a musical theatre fellowship at NYU/Tisch, and in 2016 and 2017 was recognized by Barrington Stage Company as one of the “ridiculously talented writers you should know (but probably don’t).” Jesse lives in Coney Island with his amazing wife Marlena and son Jonah Blue.

Adapted from the 2007 Sundance Award-winning indie horror film by Mitchell Lichtenstein, Teeth tells the story of Dawn O’Keefe, an evangelical Christian teen with a powerful secret: she has teeth in her vagina. When the men in Dawn’s life try to exploit her, she is forced to choose between survival or destruction.

Michael R. Jackson holds a BFA and MFA in playwriting and Musical Theatre Writing from the NYU Tisch School of the Arts. As a songwriter, he has seen his work performed everywhere from Joe’s Pub to NAMT. He wrote lyrics and co-wrote book for the musical adaptation of the 2007 horror film Teeth with composer and co-book writer Anna K. Jacobs. He wrote the book, music and lyrics for the musicals White Girl In Danger and A Strange Loop (2019 world premiere at Playwrights Horizons in co-production with Page 73 Productions). Awards and associations include a New Professional Theatre Festival Award, a Jonathan Larson Grant, a Lincoln Center Emerging Artist Award, an ASCAP Foundation Harold Adamson Award, a Whiting Award and a Dramatist Guild Fellowship. He has commissions from Grove Entertainment & Barbara Whitman Productions and LCT3.

The National Alliance for Musical Theatre, founded in 1985, is a national service organization dedicated exclusively to musical theatre. Their mission is to be a catalyst for nurturing musical theatre development, production, innovation and collaboration. Their 238 members, located throughout 33 states and abroad, are some of the leading producers of musical theatre in the world and include theatres, presenting organizations, higher education programs and individual producers. Among the 260 musicals launched by NAMT’s annual Festival of New Musicals are The Ballad of Klook and Vinette, Benny & Joon, Come From Away, Darling Grenadine, The Drowsy Chaperone, Gun & Powder, HONK!, It Shoulda Been You, Lempicka, Ordinary Days, Striking 12 and Thoroughly Modern Millie, among many others, representing 491 writers.

The Green Room 42, Broadway’s Funky New Cabaret Club, recently celebrated its two-year anniversary as the theater district’s premiere destination for live music events and nightclub acts. The space lets audiences experience shows featuring Broadway’s biggest names and emerging talent up close and personal like no other space in the world. During the shows, guests can enjoy Mediterranean-inspired dishes alongside signature cocktails, craft beer and curated wine lists with no food/drink minimum. Tickets can be purchased at www.TheGreenRoom42.com. The Green Room 42 is located at 570 Tenth Avenue inside YOTEL in New York City; @TheGreenRoom42.