Get Ready For The World of Be More Chill 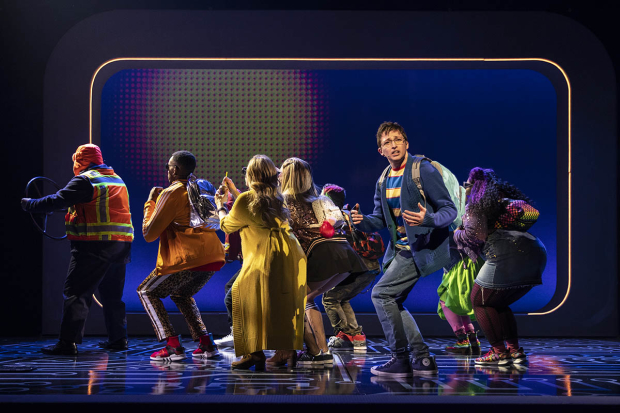 Get Ready For The World of Be More Chill

Joe Iconis’s (music and lyrics) and Joe Tracz’s (book) rock-centric new musical Be More Chill opened on Broadway, thanks in part to their massive cult following. This show has been attracting young audiences, who can relate to every element of this fantastic new addition to Broadway. I took my son who is more of a film buff and he spent his own money on merchandise, because he liked it so much. This show is a blend of Dear Evan Hansen getting up close and personal with Little Shop of Horrors, yet retains its own voice.

Be More Chill and Dear Evan Hansen were actually written and played at the same time back in 2015. Be More Chill played at Two River Theater in New Jersey. A cast album (streamed more than 100 million times) and various school productions followed.

Be More Chill is a smart look at the teen culture based on Ned Vizzini’s 2004 young adult novel. Jeremy (Will Roland, Dear Evan Hansen), a high school junior is not only is a loser, but is crushing on the drama obsessed Christine (Stephanie Hsu, SpongeBob SquarePants). Jeremy’s life consists of bullying, plays video games and lamenting with his stoner best friend Michael (George Salazar, Godspell). Jeremy may not have much, but he and Michael are a “Two-Player Game”. One fateful day, the bully, Rich (Gerard Canonico, Spring Awakening), who has been tormenting Jeremy tells him a Japanese gray pill called a Squip can take him up the social ladder. Buying the pill from a stock boy in the back of a Payless at the Menlo Park Mall, Jeremy takes the pill with the prescribed Mountain Dew. Flash, a Keanu Reeves look-alike (Jason Tam, A Chorus Line) begins taking over his life, separating Jeremy from Michael. Like Little Shop, the Squip wants to take over and it is Michael to the rescue.

Will Roland steps out of the supporting player role and proves he has the chops to play a leading man. His vocals are off the charts, especially in “Loser Geek, Whatever”. If he is not nominated for a Tony Award, this will be a crime because he embodies this character.

Bad boy Gerald Canonico and Britton Smith as Jake – the boy Christine wants, and Chloe has – and the hot Squip Tam, bring eye candy and talent to the table.

Katilyn Carlson as the it girl Chloe and her best friend Brooke (Lauren Marcus) prove girls really are mean.

But it is George Salazar’s vulnerable Michael that breaks our hearts with his raw version of his angst-filled “Michael in the Bathroom”. He is the best friend who has our backs.

Look for Chase Brook’s name being spread around as his choreography is mind-blowing.

Iconis’s songs are catchy and go in places you don’t expect. He creates antidotes to the problems of today that will be sung with gusto by the up and coming theatre enthusiasts everywhere. Iconis’s music is made just that much better by up-and-coming orchestrator and bandleader Charlie Rosen. Be More Chill has a unique pop and electronica influenced score and Rosen got the balance just right.

Joe Tracz’s book reads better on a Broadway stage showing teenage anx, vulnerability and heart. There is a dark side all teens go to and this speaks to them.

The set by Beowulf Boritt and costumes by Bobby Frederick Tilley are fun, inventive, and a little more over the top for Broadway.

Like Dear Evan Hansen this show gets a rock show ending with audiences of all ages on their feet.

A lot of this review was written August 9th because the show has not changed much.

Suzanna BowlingJune 20, 2022
Read More
Scroll for more
Tap
By the Way, Meet Vera Stark A Tribute To The Women Who Paved The Way
Be More Chill – Not just Great but Great for Broadway