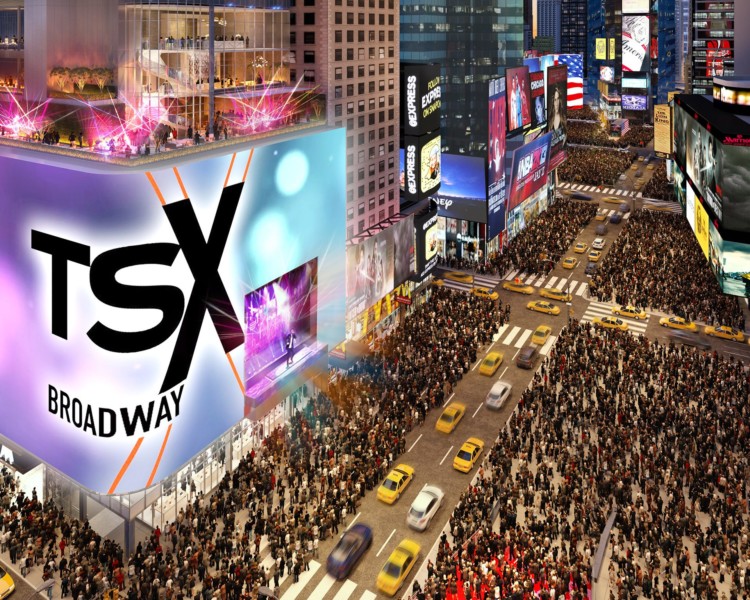 TSX Broadway is the first entire-building with an immersive experience in the heart of Times Square. TSX will offer Times Square its first permanent outdoor stage.

TSX Broadway will include the preservation of Times Square’s most beloved theater, the landmarked Palace Theatre. As TSX Broadway looks to the electric future of Times Square, the Palace Theatre is a magical reminder of Broadway’s rich history. The $50 million total rehabilitation of the 1,700 seat, 105-year-old iconic theater will ensure it remains an entertainment destination for decades to come. Since the 1960s, The Nederlander Organization has been the visionary owner, along with Stewart F. Lane, and operator of this legendary stage and preserved it physically while ensuring its success on Broadway.

The renovation includes the painstaking refurbishment of every inch of ornate plaster. The landmarked theater will be physically lifted more than 30 feet and given a new home within TSX Broadway. New theater entrance, amenities, and modern technology will update the experience while respecting its historical character.

TSX will also have ten stories of experiential retail, a 669-room hotel and the largest outdoor restaurant terrace in Times Square, TSX Broadway is truly unique. As a whole, TSX Broadway becomes a flexible, 46-story, 550,000-square-foot dreamland with the capacity to serve 15 million visitors.

Suzanna BowlingNovember 21, 2021
Read More
Scroll for more
Tap
3 Last-Minute Gifts for the Friend Who Has Everything
Broadway League Starts To Release Grosses But Not Per Show