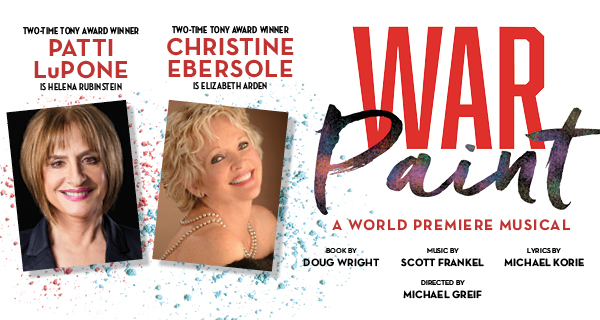 Get Ready for War Paint with Patti LuPone and Christine Ebersole

Get Ready for War Paint with Patti LuPone and Christine Ebersole

This June we’re thrilled that our reviewer will be covering the world premiere of War Paint starring two-time Tony Award winners Patti LuPone and Christine Ebersole at The Goodman Theatre in Chicago. The show is based on the true story of Helena Rubinstein and Elizabeth Arden, two cosmetics pioneers and business titans in the early 20th century. Both were masters of self-invention who sacrificed everything to become the country’s first major female entrepreneurs. They were also fierce competitors, whose 50-year tug-of-war would give birth to an industry.

The exciting news is that War Paint is from the acclaimed Broadway team of librettist Doug Wright (Grey Gardens, I Am My Own Wife, The Little Mermaid); composer Scott Frankel and lyricist Michael Korie (Grey Gardens, Far From Heaven); and director Michael Greif (Rent, Next to Normal, If/Then and Grey Gardens).

Doug Wright won the Pulitzer Prize and Tony Award for his play I Am My Own Wife. Composer Scott Frankel and lyricist Michael Korie’s work on Grey Gardens. They were nominated for a Tony Award, Drama Desk Award and Outer Critics Circle Award. They also wrote the music for Far from Heaven. Director Michael Greif directed the original Rent on Broadway and was nominated for a Tony for directing Next to Normal in 2009. last season he directed Idina Menzel in If/Then.