Get Your Appetite Ready For Taste of Times Square 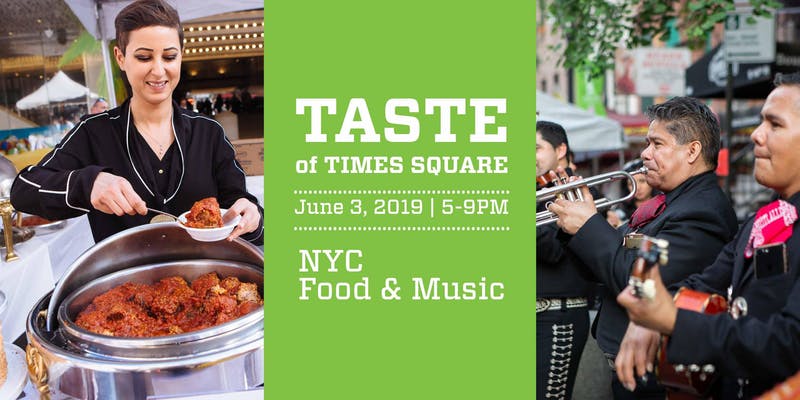 Get Your Appetite Ready For Taste of Times Square

Over 40 of the best restaurants offer their finest tastes from around the globe at Taste of Times Square. This annual outdoor food and music festival will be held Monday, June 3 from 5:00pm – 9:00pm on 46th Street between Broadway and 9th Avenue (including historic Restaurant Row).

Festival admission is free. Each “taste” ticket is $1 with dishes ranging from 2-6 tickets. Tickets will be available for purchase on the day of the event and in advance online here.

Anthony Carrera is a classical/flamenco/metal-based guitarist based out of New Jersey.

Baby Soda is on the forefront of a new movement loosely known as street jazz; with an eclectic set of influences ranging from 30’s era swing, New Orleans jazz, and southern gospel. The ensemble doesn’t desire to recreate the past, rather they bring the concept and joy of the music to the present.Baby Soda is an adaptable and ever changing group made up of New York’s finest musicians; featuring trumpet, trombone, clarinet, banjo and the unique one string box bass.

Cajun Cellist is a Texas-born, classically-trained Sean Grissom and his stripped-down, homemade electric cello. An international attraction with his hit one-man show O’Cello. A proud member of MUNY, he has been the emcee for the annual MUNY auditions. Audiences love Sean’s superhot, jazzy style of country, swing, rock, and cajun sounds, all delivered in his offbeat, vaudeville manner. Sean has produced and released seven recordings.

The Ebony Hillbillies are not only one of the last black string bands in America, they are the only string band based in NYC. Consisting of fiddle, banjo, washboard and bass fiddle, they have successfully created a following that has crossed over to audiences in pop, country, bluegrass, folk, jazz and beyond while maintaining their grassroots credibility. Their 19th century string band sound was popular in the 1920’s and 1930’s; and was a key element in the genesis of jazz and virtually everything after (blues, bluegrass, rockabilly, rock & roll, etc…).

Quincy Jones says, “Lee England Jr. is the future of music. He is a remarkable talent that comes by very rarely, creating original and unique music straight from his soul. His imagination and musical innovation speak to all of us, reinforcing that music is, indeed, a universal language.”

Mariachi Nuevo Mexico was formed in May 2000 by five of the most skilled mariachi musicians in the region. Now under the direction of our first trumpet player, Rene Perez Diaz, Mariachi Nuevo Mexico features a vihuela, Mexican bass (Guitarrón), violin, and two trumpets.

Paul Mueller is the lead musician and song writer, producer, and audio engineer for the successful percussive driven group from New York City, Mecca Bodega. He’s led the group through amazing live performances at venues such as Lincoln Center, Woodstock, Celebrate Brooklyn Festival, Merkin Concert Hall, and tours of the US and Australia as well as the completion of eight internationally acclaimed CD recordings. Whether it’s the soundtrack for HBO’s Subway Stories, compositions for directors Jonathan Demme and Spike Lee, or PBS documentary scores, Paul’s truly original songs and unique playing style have been heard around the world. As a studio musician, he’s featured on over 40 CDs/DVDs including sessions with Public Enemy, Stephen Stills, Branford Marsalis, Bill Laswell and Mike Doughty. Paul’s new solo CD release is “Floating On Land” and has been heard nationwide on over 120 National Public Radio Stations.

Marc Mueller is an imaginative Music Under New York (MUNY) subway musician performing for the past 19 years with the highly acclaimed percussive group Mecca Bodega. Co-founded with his brother Paul, the group’s unique hypnotic sound has been heard throughout the subway system with over 2000 performances to date in a majority of the MUNY locations. The group has been featured in award winning films, soundtracks, TV programs, commercials, dance scores, NPR broadcasts of New Sounds on WNYC Radio, a PBS street performance documentary and has composed music for directors including Jonathan Demme for the HBO movie Subway Stories; as well as appearing in the film. Marc has also been performing solo for the last 3 years, expanding his polyrhythmic craft as ‘StreetMule’. He has just released his new solo recording: Talkin’ True Da Tube.

The George Gee Swing Orchestra returns to the Entertainment Tent to provide live jazz music. Join the orchestra and the SWING46 DJ and take a swing dance break between tastes, with professional dance instruction by Brian Wonsever!

Drum Cafe – Drum Cafe is one of the world’s leading interactive Team Building and Events Companies. It’s interactive drumming is a powerful way to make any event unforgettable! Each person gets a drum. By connecting to the music and each other, they’ll learn to work in harmony and experience the power of the group. Drum Cafe’s success is proven in more than 20 countries and over 20,000 events. Come join Drum Cafe on 46th Street to see what the excitement is all about!

Some of Times Square’s best restaurants will offer their finest tastes from around the globe at the 2019 Taste of Times Square – our annual outdoor food and music festival.