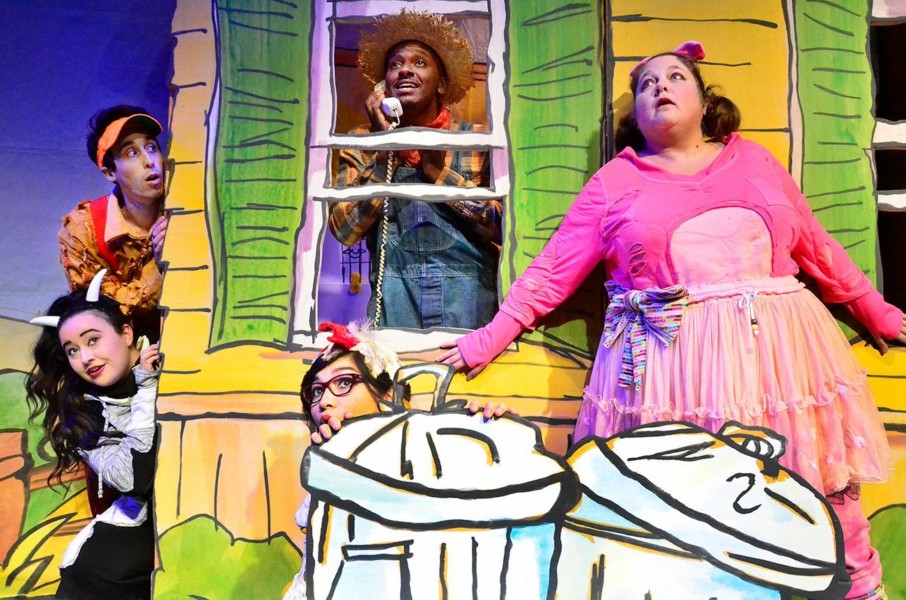 Giggle, Giggle, Quack – Creative Writing Down on the Farm

Giggle, Giggle, Quack – Creative Writing Down on the Farm 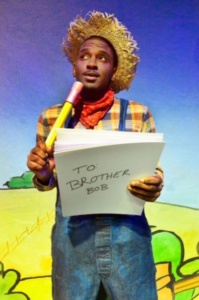 I am often asked why I make it a point to attend theatrical events specifically geared to a younger audience. I am clearly older than the intended demographics of the source material. With that said, I fondly recall my own childhood experiences and exposure to live theater. The first being a Best Family excursion to Annie and her rag tag crew of singing and dancing orphans. Thus began my lifeline appreciation for the live stage and theater, at the ripe old age of six or seven.  You see, one never knows how profoundly performing arts with touch and shape the lives of the members of the attending audience. So with that in mind, I have to tip my hat once again to the Lifeline Theatre and their unwavering commitment to producing bright and original pieces which specifically appeal to younger audiences. If you can attract them while they are young, you will cultivate fans for a lifetime. Rounding out their latest KidSeries Season, Giggle, Giggle, Quack is a lighthearted, down on the farm comedy, focusing on a troupe of mischievous, but family friendly animals, that packed a lesson about creative writing skills through original song. Based on the popular 2002 New York Times bestselling children’s book from Doreen Cronin and Betsy Lewin, director Shole Milos kept the pacing quick and the lessons light. Adding the whimsical book by James E. Grote and music and lyrics from George Howe, the stage was set for a hour of entertainment. 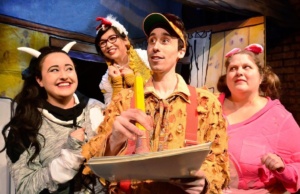 The story is remarkably relatable. Farmer Brown (Bernell Lassai III) decided he needed a break from his everyday life on the farm, so he planed a Tahitian vacation. As he headed off to the airport, the farm’s interim caretaker arrived, Brother Bob, also played by Lassai. The farmer left copious detailed instructions for his sibling to help the big city accountant adjust to his temporary rural environment. Before Bob can read his daily assignments, the animals of the farm decided to rework the directives for their own individual benefit. The Pig (Heather Currie) chose to indulge her delusions of grandeur with a luxurious bubble bath instead of her routine mud bath, so she could become the most “pretty little piggy.” The Cow (Jennifer Ledesma) just wanted to watch her favorite video, “The Sound of Moo-sic.” The anxious Hen (Carolyn Plurad) may have “abandonment issues” fretting about the return of the farmer, but decided to have pizza ordered for everyone as “pizza is the great equalizer.” It is a good thing Duck (Brian Tochterman Jr.) had such astonishing penmanship, as he used his golden pencil and crafty writing skills to amend all of the farmer’s helpful notations. After a few days of mischief, Hen started to feel guilty for taking advantage of Brother Bob. She decided it was time to tell Brother Bob the truth?  “Stop being such a drama chick” she was warned by her companions. Do the animals eventually come clean in the end? Well, you have to buy a ticket to find out for yourselves. 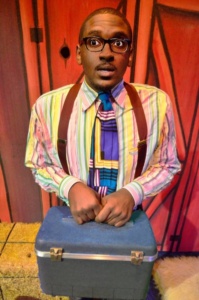 The appeals of Giggle, Giggle, Quack are many. The original songs had audience members tapping a toe. Alan Donahue’s brightly colored scenic design was an explosion of colorful Crayola box ingenuity. Jana Anderson’s costumes were a thrift shop wonder that most likely inspired some audience member craft projects at home. Erik S. Barry inventive lighting design was of note as well.  Well worth the trip up to Roger’s Park to catch one of the weekend only performances, Giggle, Giggle, Quack will have the kiddos enthralled while their accompanying adult campion will find themselves chortling too.  Live theatrical family entertainment is quickly becoming Lifeline Theatre’s true benchmarks. Recommended for audiences five and up. 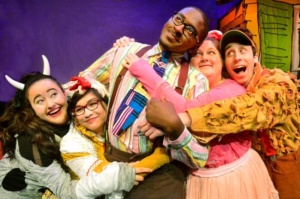