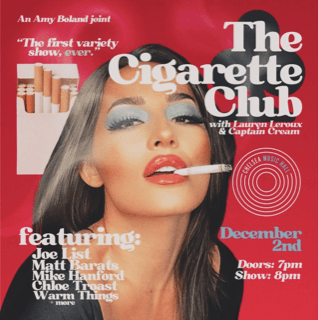 This December Chelsea Music Hall rings in the holiday season with a star-studded lineup of shows including top comedians, actors and entertainers.

Eye-catching and clever, this modern take on the variety shows of old boasts a degree of glitz and glamor typically reserved for Broadway. The Cigarette Club invites the audience on their dazzling journey through time and space to bring you laughter, music, and surprises that will have you reaching for the proverbial post-coital cigarette when the night is through. Holy smokes!

Broadway veterans Julia Mattison and Joel Waggoner of Advent Carolndar, the viral social media sensation for the past three years where the duo created one original holiday song for the first 25 days in December, are back with their first-ever live shows to get everyone in the holiday spirit.

With Advent Carolndar’s first live performances, fans attending the live show can expect to sing along to such hits as “On the Brink!,” “There’s a Reindeer in Our Yard (We Should Eat It),” “A Very Sondheim Christmas,” and “Stable Girl,” as well as clutch their pearls while Joel and Julia nosedive into some one-night-only improvised carols that are guaranteed to go violently off the rails.

The live show at Chelsea Music Hall is directed and produced by Tim Drucker with associate direction by Joyah Spangler.

Chelsea Music Hall is located at 407 West 15th Street, New York, NY. For more information on upcoming events visit www.ChelseaMusicHall.com or give them a follow @ChelseaMusicHall.