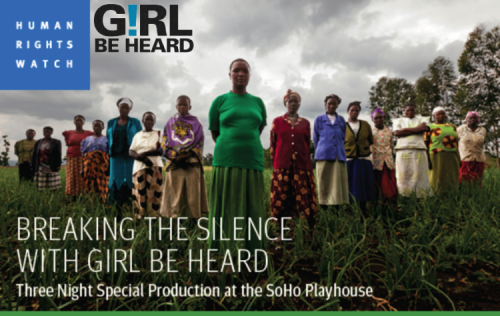 Breaking the Silence with Girl Be Heard, highlights a number of global issues faced by millions of women daily. Told through a series of monologues and songs from individual perspectives, the performances are based on fact and expose the greater universal truths. Human trafficking, child marriage, domestic violence, rape as a war crime, issues of refugees, the right to a voice and the right to ownership and education are some of the issues addressed. With a wonderful star cast from stage and cinema, the production is a spotlight on the work of Human Rights Watch, as the horrors continue to flourish in darkness and silence.

“Breaking the Silence with Girl Be Heard, is evidence that theatre’s healing power transcends borders. This ground-breading collaboration, between Girl Be Heard and Human Rights Watch, is elevating the stories of survivors to the global stage, by harnessing the voices of actors, activists and advocates from around the world. Together, we are breaking the cycle of silence that perpetuates gender-based violence,” said Jessica Morris, CEO of Girl Be Heard.

Successfully performed in Geneva 2013 and London 2014. Breaking the Silence with Girl Be Heard was selected for the closing ceremony for Ending Sexual Violence in Conflict hosted by William Hague and Angelina Jolie, and will be performed in The Hague April 2015. Premiering in New York Thursday the 19th to the 21st February 2015, to coincide with The World Day of Social Justice. The production opens two weeks after President Barack Obama announced his campaign “It’s On Us” to end violence against women and girls during the 2015 Grammy Awards.

Girl Be Heard is a non-profit theatre and educational program that provides a safe environment for girls to write, direct, and perform theatre productions under the guidance of professional directors, playwrights, actors, activists, and intellectuals. Join the movement at girlbeheard.org.

Human Rights Watch is a nonprofit, nongovernmental, human rights organization made up of roughly 400 staff members around the globe. They press for changes in policy and practice that promote human rights and justice around the world.

WriterAugust 11, 2022
Read More
The Woodsman is a Must See Piece of Theatre
Hamilton Celebrates With a Stint on CBS SUNDAY MORNING and Several Ways to Buy Tickets