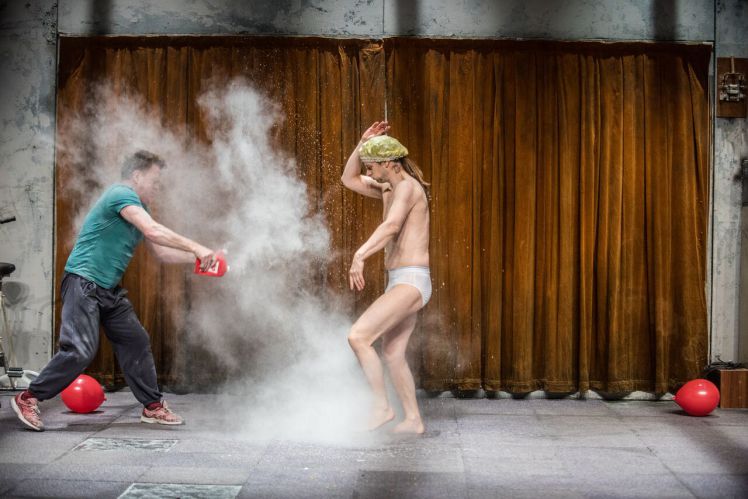 Giving yourself over to Walsh’s Ballyturk

Giving yourself over to Walsh’s Ballyturk

“Freedom” might be the most prevalent or telling word spoken in Enda Walsh’s hypnotic puzzle of a play, Ballyturk currently wrecking 80’s pop music and physical havoc at St. Ann’s Warehouse. This Irish playwright who won a Tony for writing the book for one of my favorite musicals, Once in 2012, who also purposefully and decisively directs his own play, something I generally advice against, serves up some mesmerizing portrayals during this 90 minutes of Beckett-like avant garde abstractionism. Ballyturk isn’t easily explained, nor do we even need to in order to take in the pleasure of viewing such a wildly captivating creation. We just need to give ourselves over to the bleak oddness, and enjoy.

The powerful cello, composed by Teho Teardo (Walsh’s Arlington) strums us grandly into the quick and sharp beginning: a jarring and intense Shakespearean-like soliloquy being given by a young man posturing comically in a spotlight. Dressed in a too short and too tight red tee shirt and matching padded helmet (magnificent set and costuming by Jamie Vartan), “1”, played with a never-ending level of effervescent energy by the captivating Tadgh Murphy (Walsh’s Penelope at the Druid), instantly engages us and never lets go. He elicits an empathetic maternalistic attachment before we are even consciously aware of his circumstance. And then suddenly, he is joined glaringly (impressive and precise lighting by Adam Silverman) and hilariously by the slightly older “2”, played brilliantly by the elastic and charismatic Mikel Murfi (Walsh’s The Last Hotel). These two, who seem to be locked up in a high walled windowless room, act out, dance, and seemingly take care of each other in a endless daily rhythm of existence and distraction.

“Freedom” doesn’t seem to be an option for them, as they tease out clues about what has brought them here and what their situation is really like. Solutions to the puzzling scenario are never given, although one can’t help to try to piece together some metaphorical meaning to the madness. Voices are heard through the walls and music rocks their world (very impressive sound design by Helen Atkinson; voices: Eanna Breathnack, Niall Buggy, Denise Gough, Pauline McLynn) causing many a festive and athletic creation of free-spirited movement in between moments of dramatic inventions about the symbolic Irish town of Ballyturk and the made-up people that live there. Then suddenly, with a shocking and impressive crack, another visually impressive dimension appears, and in walks “3”.

Played ravishingly by Olwen Fouéré (Beckett’s Lessness at the Barbican Beckett Festival 2014), her arrival, in the eyes of “1” and “2” is long overdue. Apparently “3” has some deep sort of connection to these two, and some power over them. She smokes, demands some tea, tells a story, asks questions, and sings the Frank Sinatra classic, “Time After Time” into an old fashioned microphone dropped down from the sky. Why does she do these things? I can’t explain. Maybe she is a blond angel of death or a metaphorical warden casually offering “freedom” to one, and only one of them. She explains that one may come walk the 12 seconds to join her in what lies beyond. But what is beyond? Is it freedom from this imprisonment out into the real and complex world, or freedom from their routine-trapped existence by means of death? Is this a metaphor for our trapped existence on this planet, where we live out our days imprisoned in our own manufactured routine lives? And what does freedom actually look like in Walsh’s universe? Escape into nirvana or death? You tell me, but either conclusion ratchets up the dilemma between the two young men. Which one will go, and what will it mean for the one that remains?

In London at the majestic National Theatre (one of my favorite theaters in the world) following a world premiere in Galway in July 2014, Walsh’s play was produced to great acclaim starring the enigmatic Cillian Murphy (Golden Globe winner for 2005’s “Breakfast on Pluto“) as “1”, Murfi as “2”, and as “3”, the elegantly dressed Stephen Rea (nominated for an Academy Award for 1992’s “The Crying Game“). The production was a critic hit, wowing the audiences with its open ended outlook on human existence. In this production, brought over to Brooklyn by Landmark Productions and The Galway International Arts Festival, having “3” played sveltely by the Lady Gaga-look alike, Fouéré is a revelation, one can’t imagine Rea doing anything as electrifying in the part. She’s thoroughly captivating in her storytelling and interactions with these two nervous men. Her performance is a masterpiece of hypnotic conception wrapped in a fashionable trench coat and topped with white platinum long hair. It should not be missed.

This incredibly well staged production brings to mind the classic absurdism of the powerful and dark Waiting For Godot. It tantalizes with its abstract creationism and vagueness. It’s powerfully bleak while being wrapped in humoristic scenarios crafted with sad and comic intensity. I have always found that I struggle sometimes to give myself over to abstract theoretical plays that are heavy on concept without finding a way to connect to our inner humanity, like Richard Maxwell’s Good Samaritans. But Walsh has found the best of both worlds, puzzling our head, while also engaging our hearts. That final visual is so wrought with a complexity of ideas while being, most importantly, solid and devastating in its emotional attachment. So tell me, even as our souls are pulled in numerous confusing directions, who wouldn’t want to visit Ballyturk to see and try to figure this outrageous puzzle out all by themselves?