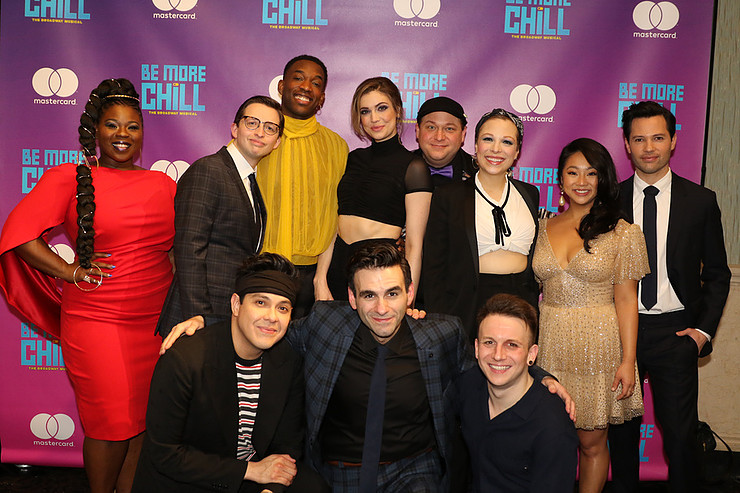 Here are some more photo’s from the opening night and after party.

Ghostlight Records has announced it will record a new cast album of the hit Broadway musical sensation Be More Chill. The show’s Original Broadway Cast Recording will be produced by Kurt Deutsch, Joe Iconis, and Charlie Rosen, and co-produced by Ian Kagey and Emily Marshall for release later this Spring. Be More Chill is now playing at Broadway’s Lyceum Theatre (149 West 45th Street, NYC). The album will be recorded March 17-19.

Iconis said, “The original cast recording of Be More Chill changed my life. It was the launchpad for this entire crazy journeywhich has led myself and my collaborators all the way to Broadway. I couldn’t be more excited that the new material written for the show since our 2015 recording will finally be preserved, along with the performances of our brilliant current cast. I am so proud that a second cast recording will soon be able to sit beside our first beloved album in the CD carrying cases, LP shelves, and hard drives of Be More Chill fans everywhere.”

Following up on the success of the 2015 album, a special edition Be More Chill  original cast recording on vinyl is now available. The 2-disc package features new illustrative designs, green and red colored discs, and a 16-page, 12 x 12 booklet with lyrics, production photos and a new liner note from Joe Iconis. The Be More Chill Karaoke (Original Cast Recording)album is also available from the label. The album’s seven tracks include fan favorites “More Than Survive,” “I Love Play Rehearsal,” “The Squip Song,” “Two-Player Game,” “A Guy That I’d Kinda Be Into,” “Michael in the Bathroom,” and “The Pitiful Children.” To download or stream the Karaoke album click here. Performance rights for Be More Chill  are licensed by R&H Theatricals.