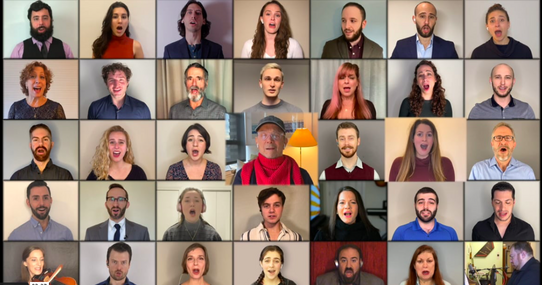 The cast of the critically-acclaimed off-Broadway hit, Fiddler on the Roof in Yiddish, released a rendition of “God Bless America” to offer hope, featuring Academy and Tony Award winner Joel Grey and Steven Skybell.

The video of “God Bless America” in Yiddish was co-produced by Fiddler cast members: Lisa Fishman and Ben Liebert. The video was mixed and edited by Liebert. An original musical arrangement and piano accompaniment were provided by Fiddler orchestra first chair clarinetist, D. Zisl Slepovitch, and the video features Lauren Jeanne Thomas on violin, who played the titular role of “The Fiddler,” along with Slepovitch on piano. Motl Didner, Associate Artistic Director of the National Yiddish Theatre Folksbiene, served as dialect coach.

Fiddler on the Roof in Yiddish (aka: Fidler afn Dakh) was originally produced by the National Yiddish Theatre Folksbiene at the Museum of Jewish Heritage – A Living Memorial to the Holocaust.  This production transferred to Off-Broadway’s Stage 42 Theater with Hal Luftig and Jana Robbins as lead producers.