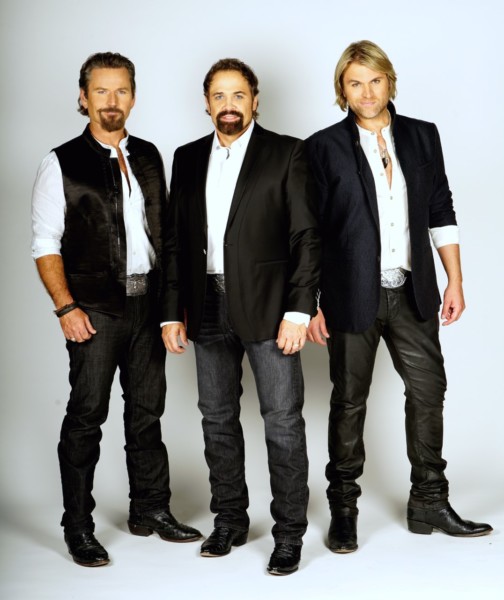 When PR guru Judy and her son Sean Katz’s invited me to review The Texas Tenors (TTT) at The Green Room 42, it took some coaxing. I am not the biggest fan of tenors, as they always sound like they are trying to prove something. Also what you normally get is opera, art songs and blasé arrangements. Now granted when they are given a solo number in a Broadway show such as “Tomorrow Belongs To Me” from Cabaret or “Pity The Child” from Chess, they stand out, but again not normally my favorite songs from the show. Last night my mind was changed.

Starting out with “Seven Bridges Road”, the perfect harmonies of “The Contemporary Tenor” Marcus Collins, “Romantic Tenor” JC Fisher and “The Tenor” John Hagen filled the room with glorious, melodic, vibrations. each has a distinct vocal type, but when blended together is simply beautiful.

The spiritual “You Raise Me Up”, which had a video of soldiers, veterans, first responders, firefighters and those who give their lives to help others added a different dimension to a song that I have always equated with God. The hero’s of our lives are always those who put their lives ahead of ours and I felt that gratitude.

“Rise” was written for the trio by their band members daughter because they wanted a song about tolerance, peace, love and hope. They wanted to put a song out that empowers people to live life to fullest and find the strength inside.

Then the song that made me and the other audience members remember how great America is, “God Bless the USA”. What was so thrilling was to see the audience stand – up for this number. In a country so divided, the freedoms we enjoy in this country were made relevant and proud.

The Texas Tenors were on America’s Got Talent in 2009 and then went on to to star in their own television special for PBS in 2014. They were honored with five Emmy Awards nominations and three wins. Then in 2019 TTT’s were on America’s Got Talent: The Champions. After airing worldwide their fan base grew. They have over half a million followers on social media and more than 20 million views on YouTube, Facebook and Instagram. They were also named Billboard Magazine’s #10 Classical Artist in the World for 2019. The TTT’s have performed in more than 1400 live concerts in just the last 10 years, normally in huge arena’s like Madison Square Gardens, so seeing them at The Green Room 42 gave an intimate version of that experience.

Showing their contemporary side Ed Sheeran’s “Perfect” and then Phil Spector, Barry Mann, and Cynthia Weil’s “You’ve Lost that Lovin’ Feelin'” had TTT’s telling about how Bill Medley helped them. On the screens were Bill singing with TTT, which he did in the PBS special. It was quite a neat trick.

One of my favorite songs of the night was the rousing “Bootdaddy” that led to The Rolling Stones “Wild Horses”. Bruno Mars’ “Just the Way You Are” had Marcus going into the audience, taking selfies and connecting with the audience. Not really a fan of interaction when I am reviewing, Marcus broke me down. You could feel how much this group loves their audience and appreciates them.

The band consisting of Ryan Hurn on drums, Larry Hanson on bass and acoustic guitar, Mitch Keirsey on mandolin, electric and acoustic guitar and Josh Hanlon on keyboards had a chance to show their chops with their own moment. They then got to show a different side with The Phantom of The Opera Overture. The group besides using their band, used tracks to flush out the sound. I am not sure these were needed, but they made for a lush sound.

Broadway was highlighted with “Music of the Night” and Leonard Bernstein’s “Somewhere”. These TTT cover a wide range of musical styles.

The show ended up with “My Way”, which the TTT’s did with flare.

The legendary Barbara Barrie was sitting at the table next to me with Jamie de Roy and I heard her say “now this is what I call music”. Barbara I agree these glorious voices, stunning vocal arrangements by John Hagen and the heart and soul that they exuded made this night of joy and one of pure entertainment.

Thank-you to The Green Room 42 and the Katz’s for introducing me to this talented trio.