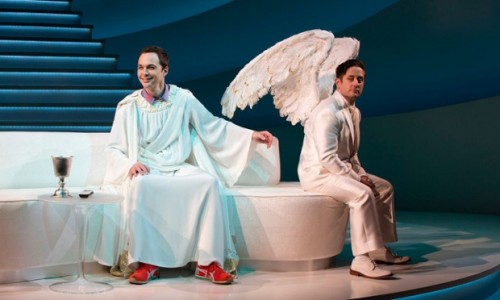 God is Anemic in An Act of God

God is Anemic in An Act of God

I thought I would adore Broadway’s newest installment, An Act of God. I absolutely love TheTweetOfGod, the Twitter by David Javerbaum, based on his 2011 best-selling “The Last Testament: A Memoir by God.” My guilty pleasure is Jim Parsons, on “The Big Bang Theory,” but somehow as a play, the snarkiness is dulled down and what I love about both is now a lull.

Directed by Joe Mantello, there is nothing really that funny or that interesting for the short….long 80 minutes. When God taking selfies with his angels is the highlight, something is terribly wrong.

I did laugh at God’s reaction to evolution? “I planted it. When anyone gets testy or annoying, you’re lucky I’m God, not Patti Lupone!” I did find it offensive at “People say why did you let the Holocaust happen? Well, I say no Holocaust, no Cabaret.” The longest part of the show included “I’ve grown weary of the Ten Commandments, the way Don McLean has grown weary of ‘American Pie,” with a Top Ten that read like a bad David Letterman episode.

For those who love Parson’s, as my guest does, then the $145 will get you just a little bit closer to him and he is adorable, if not just a little bit too sickeningly sweet. I appreciated his work a lot better in The Normal Heart and Harvey.

I just found the whole show to be a bore and somehow the most disappointing part of this was I was really looking forward to this show. Ah well some other time! For laughs and a good show head to Something Rotten!

Suzanna BowlingMay 9, 2022
Read More
Scroll for more
Tap
Cagney Needs to Clear the Table – Make Way For the Main Course
The Painted Rocks at Revolver Creek The Eyes Have it