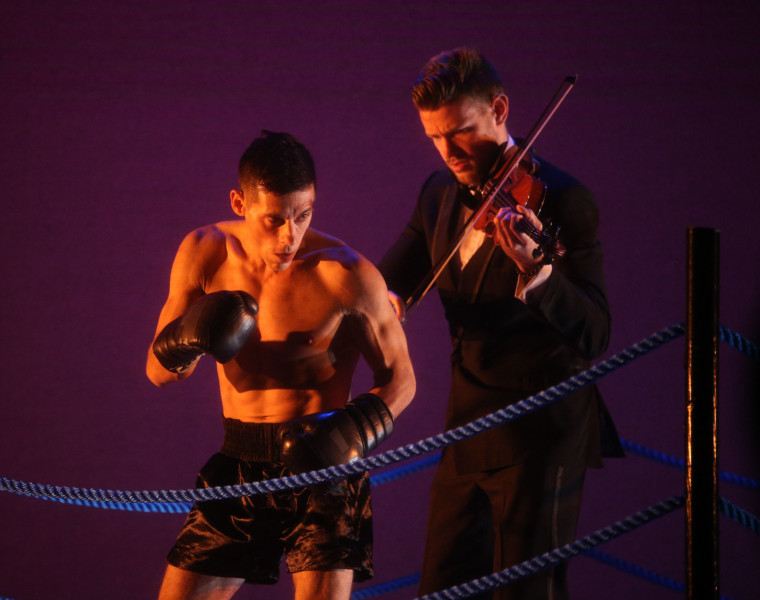 Room 15 Theater Group’s production of Clifford Odets’ Golden Boy is a fundraiser for the non-profit organization stoPD (Support and Training to Overcome Parkinson’s Disease). The organization has programs in New York and Los Angeles to help people who have Parkinson’s disease. They offer a non-contact boxing program, and their new initiative is to start a theatrical program. Putting up a theatrical production about a boxer is the perfect fundraiser.

Golden Boy is a theatrical classic about Joe Bonaparte (Alex Montaldo), a gifted musician who pursues boxing for fame. His father, Mr. Bonaparte (Ron Shetler), feels that he should be playing the violin instead. Joe proves his worth, and boxing manager Tom Moody (Gregg Prosser) takes him on. While Joe starts winning and making a name for himself, he falls in love with Tom’s fiancé and secretary Lorna Moon (Kathleen Simmonds). 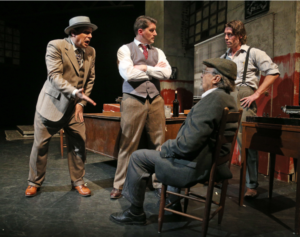 There are several moments that feel misinterpreted to me – particularly the interactions between Siggie (Fady Kerko) and his wife, Anna (Mia Christo). The actions and inflections are occasionally counterintuitive to the dialogue they present. Often the speaking actor has their back completely to the audience – I suspect co-directors Aaron Latham and Graydon Gund to be at work here. It just doesn’t work. Outside of those few moments, the stage and scenic design are well used, and to great effect – particularly the moments during boxing matches.

The large cast works very well together, and they make the best of cramped areas on the set. James Rich plays Roxy Gottlieb, a clownish manager, and he escalates every scene too quickly. This stands out because the actors around him do not respond to his energy in kind. Alex Montaldo has a strong, impassioned presence, and he is well matched with Kathleen Simmonds – the scenes between the two of them are the sharpest in the production. Ron Shetler, Jon Spano and Fady Kerko are satisfying to watch. 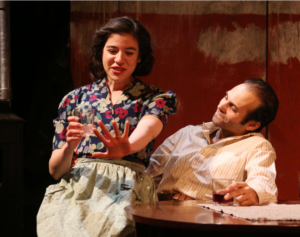 The scenic design by Anna Driftmier was very lovely but the downstage corners were too tight a space. The actors could hardly get through the door without bumping into each other, or into furniture. The color and size of the set speaks volumes about the world of the play. Having the boxing ring behind the scrim with the lighting was such a lovely effect. However making this the center piece of the set, also insured that the other scenes looked cramped.

This two shining elements of this show are the costume design, also by Anna Driftmier, and the remarkable violinist, Filip Pogády. The period clothes are pristine and appropriate to each character. From Lorna Moon’s colorful dresses and accessories to the various suits for the male character – each speaking to his financial condition, the costumes were delightful.

Pogády’s performance before and throughout the piece really added a sense of wonder to the entire production. It was enticing to hear the music amidst the action of the show. It was a charming production.

Suzanna BowlingJanuary 15, 2022
Read More
Scroll for more
Tap
Kerrigan and Lowdermilk Are the Songwriting Team to Watch After the Opening of The Mad Ones
DC’s Mean Girls: Hey Kellyanne, You Aren’t the Meanest Girl In Town!